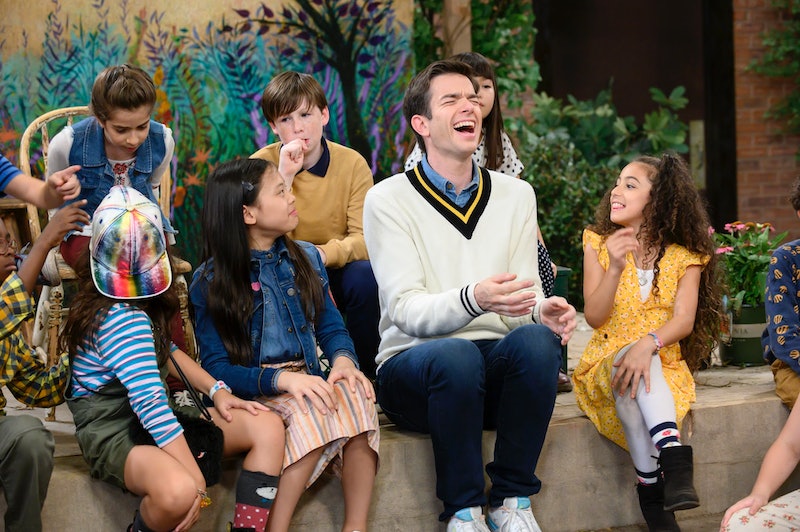 After winning an Emmy award, hosting Saturday Night Live twice, and becoming one of the biggest names in comedy, there's only one logical career path left: children's TV specials. On Tuesday, December 17, Netflix released the trailer for John Mulaney & the Sack Lunch Bunch, the comedian's upcoming comedy special featuring musical numbers, dinosaur mascots, and several incredibly surprising celebrity cameos. "What you're about to see is a children's TV special," Mulaney says at the start of the clip, wearing a preppy white sweater and surrounded by the titular Sack Lunch Bunch. "And I made it on purpose."

The show, which is described in a press release obtained by Bustle as an ode to "that bygone television era when children sang songs about their feelings with celebrity guests on funky outdoor sets," will feature "Broadway caliber showstoppers, comedy sketches for all ages, meditations on the unknown from children and adults, and a papier mache volcano."

The Sack Lunch Bunch, a group of kids aged 8 to 13 who appear in the show's musical numbers and sketches, will be joined by several of Mulaney's famous friends, including Talking Heads frontman David Byrne, who makes the volcano in question, Natasha Lyonne, and Jake Gyllenhaal. The Oscar nominee only appears briefly in the trailer, but based on his rainbow-colored marching band costume and tiny mustache, it seems like he might be playing some kind of villainous role in the special.

If, after watching the trailer, you're a little confused about whether John Mulaney & The Sack Lunch Bunch is a family-friendly musical special or a more subversive, adult take on the format, well, you're not alone. "What's the tone of this show?" one of the Sack Lunch Bunch asks, while another adds, "Is it ironic, or do you like doing a children's show?"

In a September interview with Esquire, the comedian explained that he wanted the special to appeal to both adults and kids who might decide to watch it on Netflix. "It’s something I’d like to watch,” he said, explaining the inspiration behind the show. "And I don’t wanna do anything anyone else is doing."

Mulaney has also explained that he wanted John Mulaney & The Sack Lunch Bunch to capture the "bizarre" pace of children's TV shows he watched as a kid. "I wanted to do the Sesame Street I grew up on, which was that funky [show], with like, Art Garfunkel and Grover and a girl named Gina smoking on a stoop," Mulaney explained during a recent appearance on The Tonight Show Starring Jimmy Fallon.

He continued, "Then someone would come over and be like, 'You hear about Mr. Hooper? He died!' and a kid would ask, 'What's death?' ... And then they just cut to an industrial video of an orange crayon being made, and we forget that we just learned the existential dread of death."

John Mulaney & The Sack Lunch Bunch will be available to stream on Netflix starting Dec. 24, to amuse — and possibly confuse — every member of the family this holiday season.

More like this
Ashton Kutcher Wants Danny Masterson “To Be Found Innocent” In Rape Retrial
By Jake Viswanath
All The ’70s Easter Eggs You Missed In 'That ’90s Show'
By Grace Wehniainen
At 28, Debra Jo Rupp Was Living A Much Different '70s Show
By Grace Wehniainen
These Brooke Davis Quotes From 'One Tree Hill' Will Never Get Old
By Sabienna Bowman and Jack Irvin
Get Even More From Bustle — Sign Up For The Newsletter
From hair trends to relationship advice, our daily newsletter has everything you need to sound like a person who’s on TikTok, even if you aren’t.