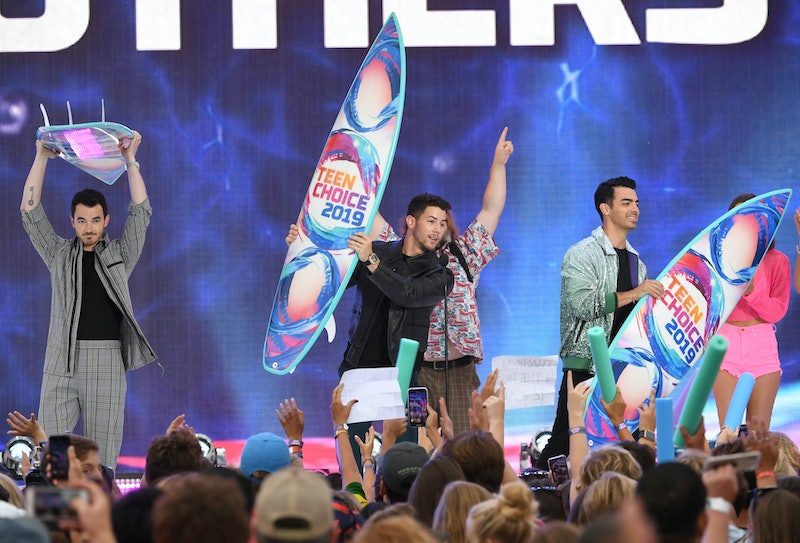 2019 is officially the year of the Jonas Brothers. They've had major singles "Sucker" and "Cool," released a new album — their first in 10 years — and a documentary in June, and just started a new tour as well. So it's no wonder they won the Decade Award at the 2019 Teen Choice Awards on Sunday, Aug. 11. And, to celebrate the momentous occasion, the Jonas Brothers used their Teen Choice Awards speech to focus on how they overcame bullying to make it to that national stage.

The Jonas Brothers have been awarded with 15 of these TCA surfboards since 2008, winning their last surfboards as a group in 2010 for Choice TV Actor Comedy and Red Carpet Fashion Icon Male. And it all culminating in Sunday night's special Decade Award, presented to them by Jack Black. But, while going from winning the Choice Music Breakout Group award in 2008 to the Decade Award in 2019 is certainly an achievement, it's not one that came easily.

In their speech, Kevin started off by saying he was bullied for his frosted tips when he was younger. He wanted to remind everyone that he got his first commercial gig because of that thing that made him unique. "The same haircut that got me called 'piss head' is what started my actual career, and it's also the reason I'm standing on this stage, receiving this award today," he said, as reported by Entertainment Tonight.

Nick followed suit, sharing how he had the incredible opportunity to be on Broadway as a kid, but that teachers gave him flack for it. "[They] felt it was their job to keep me in my place by singling me out and giving me a bit harsher treatment than everybody else," he claimed. "My teachers yelled at me, 'Stop drawing attention to yourself.' And I had enough self-doubt as it was, I didn't need to be told how little I really was," he said. "But if I had stopped what I was doing that moment ... I wouldn't be here today, receiving this award."

The speech served as a way to honor where they've been and also inspire others who might be having a rough time with peers as well. "I think for all of us, the thing that's most important is that we share with you that those things that you feel like you're singled out about, that you're bullied about, that define you in your teen years, can become the thing that make you special," Kevin said. "It's your gift. It's your power." Joe follow up by saying, "Embrace those things."

The JoBros weren't the only celebrities to condemn bullying at the awards show. Noah Centineo, who won a surfboard for Choice Social Star and Choice Comedy Movie Actor for The Perfect Date, dedicated his award to anyone who's being picked on. “You know, I really want to honor all the kids out there that are bullied and that have it hard and come from a really messed-up situation,” he said, as reported by Entertainment Tonight. “I just love you guys, and you can’t let anyone tell you you can’t do something. You cannot.”

The 2019 Teen Choice Awards were bright and fun, but they also came with an important message: be true to yourself, because you never know where life will take you.