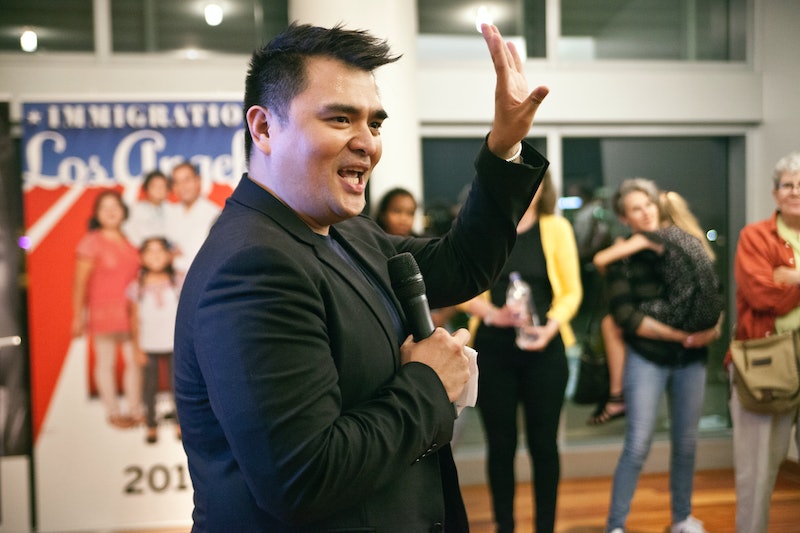 In a week marked by controversial anti-immigration policies and debate, a Bay Area school board voted on Thursday to name an elementary school after Jose Antonio Vargas, an undocumented immigrant, Pulitzer-prize winning journalist, and activist.

Vargas moved to the United States from the Philippines with his family when he was 12 years old. He was educated in Mountain View, in the same public school district in which his namesake elementary school will be opened. "As a proud product of the Bay Area’s public school system, I am overwhelmed by this totally unexpected and deeply meaningful honor,” he told the San Francisco Chronicle.

The school, which is set to open in 2019, will serve children in kindergarten through fifth grade. School names suggested by community members included Steve Jobs and other tech leaders, but ultimately the board landed on Vargas.

"We wanted to pick someone who embodied the values of what you can do with an education, as Jose does," said Laura Blakely, president of the Mountain View school board, according to the Chronicle.

He’s been the face of the American dream for so many students who came here as children, and really grew up as Americans without having citizenship. We have so many students in our community who are "Dreamers," and he’s such an inspiration.

Vargas, who credits his high school English teacher for introducing him to journalism, went on to write for the Chronicle after graduating in 2000. In 2007 he won a Pulitzer prize for his coverage of the Virginia Tech shootings for the Washington Post.

In a 2011 article for the New York Times Magazine, Vargas publicly revealed his status as an undocumented immigrant. The piece, simply titled "My Life as an Undocumented Immigrant" describes his journey of coming to America, smuggled under a fake name and passport by a "coyote" purporting to be his uncle. Not having proper documents was a problem —and fear — that followed him everywhere, he says. When, in 1999, he came out as gay, he described the experience as "less daunting than coming out about my legal status."

Vargas is currently the CEO of an advocacy organization he co-founded, called Define American, whose mission is to explore the identities of immigrants through storytelling, while also exposing injustices of the immigration experience.

Although he was briefly detained by U.S. Border Patrol in 2014 while in Texas trying to pass through airport security, Vargas has remained outspoken about his undocumented status, and what it means to be undocumented in the United States today. He produced an autobiographical documentary about his experience called Documented in 2013, and later directed MTV's White People, a film that explores white privilege in America.

Vargas told CNN on Monday that immigration is the, "most misunderstood issue in American society." He faults some of the misunderstanding with the way in which undocumented immigrants are branded "illegal," a label that he says makes them seem less than human.

He also noted that many of the children currently being separated from their parents at the border, the result of the Trump administration's "zero tolerance" immigration policy, are the same age as those who will attend the elementary school named after him in a few years.

"Those kids are being locked up right now because we actually don't think they deserve humanity," he said. "The kids locked up in cages should be in classrooms, not detention centers, not locked up like livestock."

As of Friday, over a period of six weeks, nearly 2,000 children — including 100 under the age of 4 — have been separated from their parents, who are facing criminal prosecution for unlawfully crossing the border.

"We are living through an ugly and hateful time in our country when immigrant families are under constant attack, even at schools," said Patricia Hyland, Vargas' longtime mentor and chairwoman of Define America's board of trustees, to the Chronicle. "The district’s decision is an affirmation of American values and our belief in opening our doors of opportunities to all kinds of dreamers."