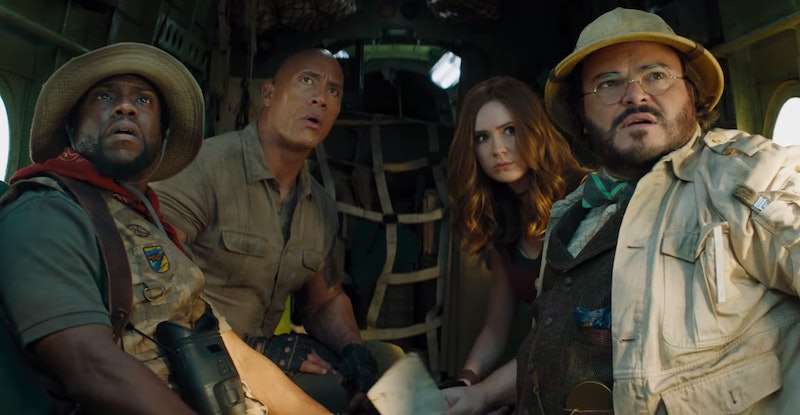 Jumanji is a beloved classic from the '90s that many remember with fondness. But it's also a 2017 reboot that moved the board game to a video game with Jumanji: Welcome to the Jungle. And now, the franchise is about to get a little bit bigger with the new Jumanji: The Next Level trailer.

The trailer for the new sequel shows that the cartridge used in the first movie is broken. It smokes and glitches, as Spencer (Alex Wolff) tries to fix it. Fans will remember that, at the conclusion of the previous film, Spencer, Fridge, Martha, Bethany, and Alex smashed the game with a bowling ball once they defeated it and managed to get themselves out. So why is Spencer fixing it? It remains to be known, but considering there were the ominous Jumanji drums at the end of the credits for the previous film, it's possible that the game is influencing him, just like it did to trick them all into playing in the first place. Or perhaps something went really south with the group and he's hellbent on fixing the game to get them back. Either way, it's nothing good, and pretty soon, he finds himself sucked back in.

In the trailer, the rest of the group decide to follow Spencer into the game to save him, but, as with everything Jumanji, it's not that easy. Because this time around, it's not Spencer who is sucked into the game and turned into Dr. Smolder Bravestone (Dwayne Johnson), it's his grandpa Eddie (Danny DeVito). And that's not all: Eddie' friend Milo Walker (Danny Glover) is also unceremoniously absorbed into the game, taking the form of Franklin "Mouse" Finbar (Kevin Hart). Finally, the other characters are scrambled as well, with Fridge in Professor Sheldon Oberon's (Jack Black) body. The only avatar that's the same as the first movie is Martha's Ruby Roundhouse (Karen Gillan). It's not revealed where Spencer went once he got sucked into the game, but it definitely looks like he might be in Jefferson "Seaplane" McDonough's (Nick Jonas) body. The trailer also introduces a new character played by Awkwafina, though her role remains a complete mystery.

The trailer doesn't give fans too much to go on beyond this set up, but Twitter is already abuzz with excitement. The biggest draw so far seems to be watching Johnson adopt DeVito's mannerisms. DeVito already exudes some powerful energy, so being able to imagine him in a giant man's body is pretty hilarious, as fans on Twitter were quick to point out.

DeVito's casting was first announced in January, and, looking back at Johnson's statement, it looks like the actor might have been hinting at this new plot twist all along. "The magic of Jumanji is who becomes who. And the idea of Danny DeVito joining our cast was too irresistible and something we knew we wanted to deliver to our audience this upcoming Christmas," Johnson said in a statement obtained by Variety.

Who knew audiences would be so excited at the thought of Dwayne 'The Rock' Johnson playing Danny DeVito in a movie? Christmas can't come soon enough.