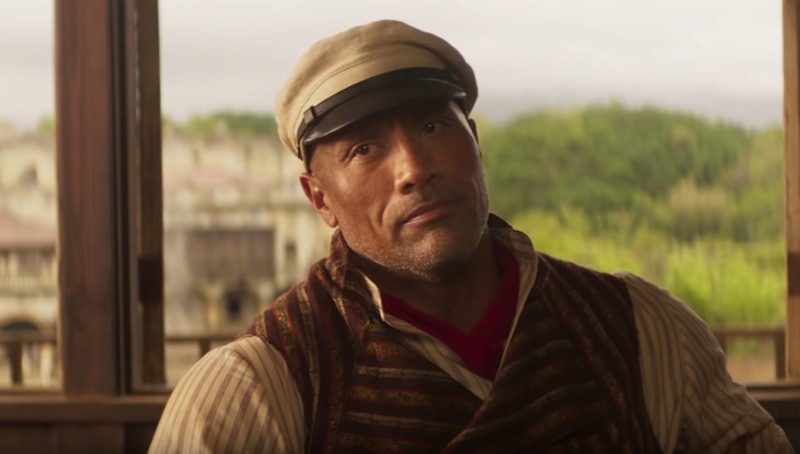 Disney is ready to take fans everywhere on a jungle cruise next year, even if they can't make it to the Magic Kingdom. The first trailer for Disney's Jungle Cruise dropped on Friday, Oct. 11, and it promises to take audiences on a wild ride alongside Emily Blunt and Dwayne "The Rock" Johnson as they search for the mythical Tree of Life.

Set in the late 1900s, Jungle Cruise follows Blunt as scientist Dr. Lily Houghton, who hires riverboat captain, Frank (Johnson), to help her and her brother, McGregor (Jack Whitehall), journey into the Amazonian wilderness. They're on an adventure to find the Tree, which is purported to possess healing powers. Along the way, the trio will have to fight off dangerous animals, traverse dark parts of the forest, and survive boat rides that look almost as turbulent as a ride in Johnson's other iconic franchise, The Fast & The Furious. All that while desperately trying to find the mythical Tree before a competing German expedition. Of course, the Tree of Life might not be the legend they're anticipating, as Johnson's character warns, "if you believe in legends, you better believe in curses as well."

While the more mystical elements of the plot seem to have been invented for the movie, Disney purists will be delighted to see plenty of homages to the Jungle Cruise ride, including (planned) attacks by natives and (faux) creatures jumping at the boat from the jungle. "Of all the jungle cruises you could take in the Amazon, this one is undoubtedly the cheapest," Frank says in the trailer, shortly before showing off "wonders" like the famed Backside of Water. "But it's also the most thrilling!"

Still, fans should expect Disney's Jungle Cruise to offer up a brand new adventure when it sails onto the big screen in July 2020. SlashFilm reported that Blunt compared it some iconic, comedy-filled action movies at the D23 Expo in August. "We’re just so moved, so honored to be in a movie like this because we both grew up madly in love with Indiana Jones, Romancing the Stone," Blunt said at the Jungle Cruise presentation. "So to be a part of something like, this same spirit, just makes my heart race."

"We wanted to make a movie that was big, that was epic, that had romance, big comedy, big action," Johnson added, before noting that the actors and creative team felt they had a duty to make something fun and exciting that also honored the legacy of the Jungle Cruise ride and the Disney Parks. "When the park opened in 1955, Walt Disney had one baby, and that baby was Jungle Cruise," he recalled, according to the Los Angeles Times. "He was the very first Jungle Cruise skipper. So we are so honored to bring this movie to life on behalf of Disney, on behalf of Walt Disney himself, and to deliver it to you guys here and everywhere around the world."

Of course, the film also promises to deliver a new kind of buddy comedy with the paring of Blunt and Johnson. In late September, The Rock teased his chemistry with Blunt with an Instagram video from D23 where he called Blunt, "my partner in epic adventures of a lifetime."

Disney fans will finally get to go on that "adventure of a lifetime" — and see Blunt and Johnson's chemistry in action — when Disney's Jungle Cruise arrives in theaters on July 24, 2020.