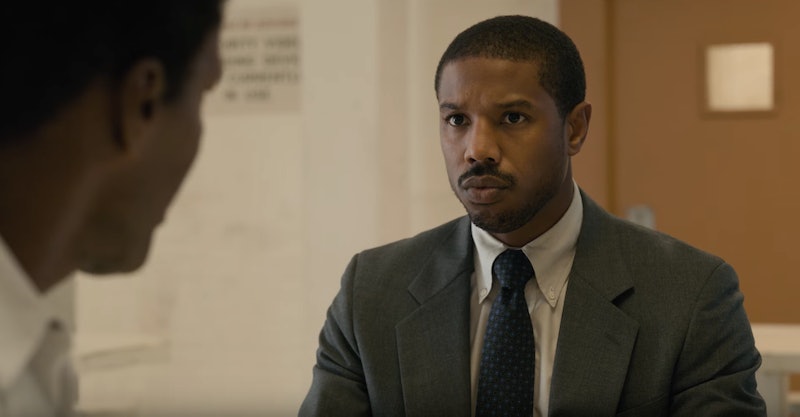 From Wakanda to Alabama, Michael B. Jordan's characters are always willing to fight for what they believe in. In the trailer Jordan's upcoming film, Just Mercy, the actor plays Bryan Stevenson, an activist lawyer who worked to get innocent men off of death row. The film — which Jordan produced, based on Stevenson's memoir of the same name — centers on the case of Walter McMillan (Jaime Foxx), who is on death row for a crime he didn't commit.

"The first time I visited death row, I never expected to meet someone the same age as me," Jordan says in the very beginning of the trailer. "From a neighborhood just like ours. It could have been me." Based on those opening lines, it's clear that Just Mercy will be a powerful story about fighting for those who need a voice the most — as well as a reflection of the way that people of color are often abandoned by the legal system.

According to Time, the movie "reveals the ways in which law enforcement and the judicial system unfairly target and punish people of color," as Jordan's character learns about the "racist conspiracy" that led to McMillan's wrongful conviction. Just Mercy also stars Brie Larson as Eva Ansley, a local legal advocate and activist who works with Stevenson to help provide assistance to the poor residents of Alabama.

In addition to being the Killmonger and Captain Marvel movie fans never knew they needed, Just Mercy has another connection to the Marvel Cinematic Universe — director Destin Daniel Cresson will also helm Shang-Chi, the first installment in the MCU to feature an Asian lead. Tentatively titled Shang-Chi and the Legend of the Ten Rings, the movie is slated to hit theaters in 2021, with Kim's Convenience star Simu Li playing the titular role. (Cressen has also directed Larson in both Short Term 12 and The Glass Castle, making this his third time working with the Oscar winner.)

Unlike the MCU, however, the crime fighting that Jordan and Larson's characters do in Just Mercy is focused less on saving the universe than finding justice for the wrongfully convicted. In a recent interview with Time, Jordan explained that he hopes the film will make people reevaluate what they think about the death penalty and the way the legal system affects communities of color.

"It’s a system that preys on people of color, people who are poor, people who are uneducated," the actor said. "When you leave this movie, I want you to question what you think is normal." As for the reaction he's hoping to inspire, Jordan added later in the interview, "I want people to feel angry, upset, passionate, sad, inspired and optimistic that you can make a difference."

Jordan also explained that he's hoping that Just Mercy and the other powerful films he has lined up will help to highlight the need for more inclusion in Hollywood. "Building bridges is cool," he said of his determination to use his career to lift up other African-American actors and creators. "I was building tunnels for a long time. It’s still going to get you to the other side — you’re just not going to see them moving."

Based on the trailer, it seems like Just Mercy will gain a lot of attention from Hollywood and audiences everywhere, and will inspire people to fight for reform, just like Jordan hopes. If nothing else, though, the story of Bryan Stevenson and his work in Alabama should illuminate the importance of amplifying the voices of those who are often ignored, both in Hollywood and around the country.

More like this
Gassed Up Promises All Things Action, Risk, & Redemption
By Frances Stewart
Twitter Is At Odds Over Taylor Swift’s Possible ‘All Too Well’ Oscar Run
By Brad Witter
Revisit 1992’s 'A League Of Their Own Cast' Photos After The New TV Series
By Grace Wehniainen
Ezra Miller Apologises To Everyone "Alarmed & Upset" By Their Behaviour
By Sophie McEvoy
Get Even More From Bustle — Sign Up For The Newsletter