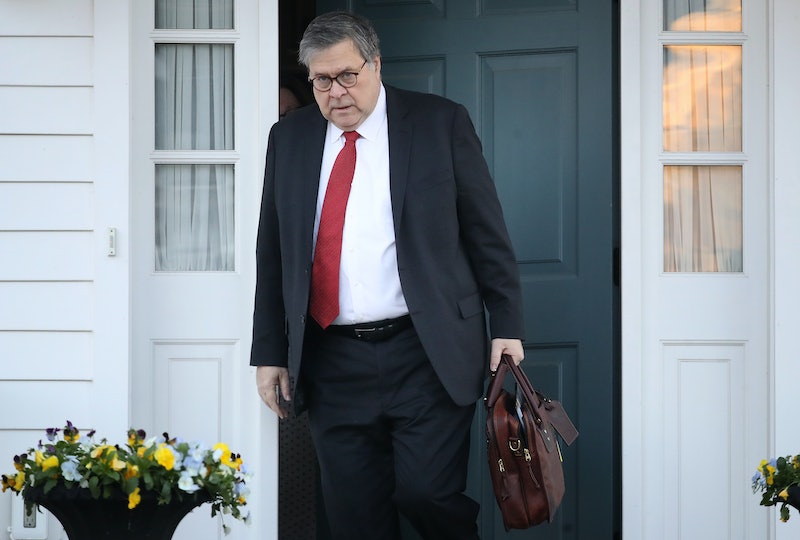 In a letter addressed to Attorney General William Barr earlier this week, a group representing the Department of Justice's LGBTQ employees said that these employees have had to contend with increasing hostility and discrimination. The group, called DOJ Pride, said that it had surveyed its membership in October 2018 and found that only 31 percent of respondents believed that “the Department of Justice values its LGBTQ employees."

"Morale is low among LGBTQ individuals currently employed in the Department, and that the Department is not recruiting and retaining top LGBTQ talent," DOJ Pride wrote, citing the survey.

Bustle has reached out to the Justice Department for comment. DOJ Pride claimed in the letter that LGBTQ employees had left the department due to alleged mistreatment, and included comments from numerous unnamed employees to back up this point.

“I am leaving the DOJ in part due to the DOJ’s treatment of its LGBTQ employees,” one employee reportedly said as part of DOJ Pride's October survey. Another worker argued that "the DOJ is no longer the welcoming, inclusive environment for LGBTQ employees that it once was.”

In light of these comments, DOJ Pride urged Barr to issue an Equal Employment Opportunity statement indicating that the Justice Department would protect its LGBTQ employees by creating a “workplace free of discriminatory harassment.” The Justice Department has not issued an EEO of this nature since the Obama administration, according to BuzzFeed News.

DOJ Pride was founded in 1994, per BuzzFeed News, and currently represents LGBTQ employees who work in the FBI, Drug Enforcement Administration, Bureau of Prisons, U.S. Attorney's Offices, and other subdivisions of the Justice Department. According to the letter that the group sent to Barr on Wednesday, only 43 percent of the employees DOJ Pride surveyed back in October said they felt “the Department of Justice does not discriminate on the basis of sexual orientation or gender identity or expression.”

Earlier this year, Barr said that he would support legislation banning discrimination against LGBTQ workers. However, much like his predecessor Jeff Sessions, Barr added that current law permits this discrimination, despite many courts arguing otherwise.

In 2017 and 2018, the Justice Department filed briefs arguing that Title VII of the Civil Rights Act of 1964 does not actually protect people from discrimination on the basis of sexual orientation or gender identity. Multiple courts have disagreed with the DOJ's position, and the 6th U.S. Circuit Court of Appeals sided with the EEOC earlier last year to argue that employers cannot use religious beliefs or anything else to justify discrimination.

Despite this pushback from courts, however, Barr seems to have maintained that federal law still technically permits discrimination against LGBTQ employees. DOJ Pride referred to this in its letter, arguing that issuing an EEO would be a significant statement for Barr to make.

“This affirmation is especially important to our members in light of the Department’s recent litigating position, which it volunteered ‘in its capacity as the Nation’s largest employer,’ that Title VII does not protect against discrimination on the basis of sexual orientation or gender identity,” DOJ Pride wrote.