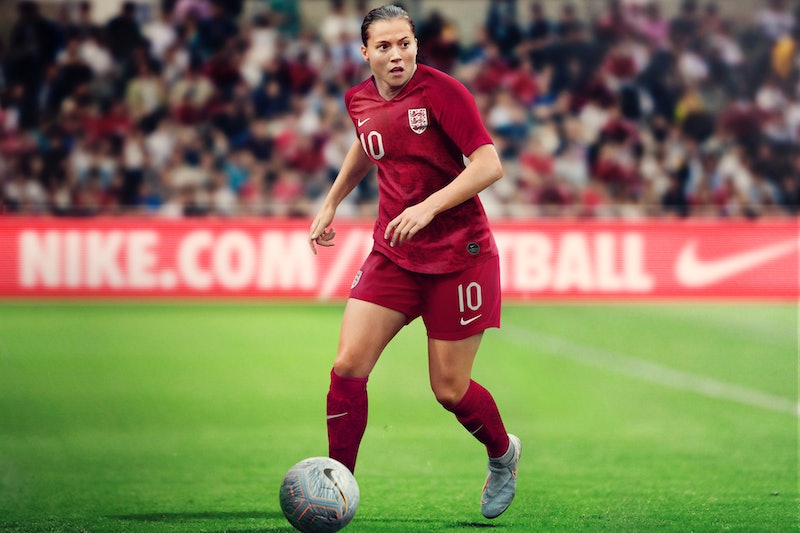 Football fans everywhere will no doubt be excited for the Women's World Cup this spring in France. England's team are hoping to bring home the glory, and I couldn't be more excited to see how they do. And an announcement today has only added to the excitement: England's team have been given a brand new bespoke kit to wear when they're representing their country on the pitch. Created in collaboration with Nike, the design is totally unique and unlike anything we've seen before. Let's take a look at the kit for England's FIFA Women's World Cup team.

The kit, which was unveiled today, has been designed with the aim to give the women's team (also known as the Lionesses) something totally unique to wear out on the pitch — rather than have them "share a kit design with the senior men's team, as has previously been the case," Sky Sports states. It features a home kit in traditional white with dark red cuffs, and an away kit in dark red. According the the Guardian, the socks also have hand-drawn prints that represent the entire country with different flora and fauna found that are native to, and found all across, England. Each kit is also made from 12 recycled bottles, BBC reports, which is another lovely touch.

In an Instagram post on the Lionesses' Instagram page, the kit was shown off in its full glory, alongside the caption: "Bold, brave and humble. The brand new #Lionesses kit, uniting our country all over again." Yeesssss.

Discussing the new bespoke kit, England forward Fran Kirby said: “It is great to see kits designed specifically with us in mind. The home kit seems really classic while the pattern of the away is exciting and new.”

“It’s the first time our women’s team have had their own unique and exclusive kits, which is a real marker of progress and an indicator of how much the profile of the women’s game has grown in this country."

Campbell continued: “We are all looking forward to the World Cup and I know the players can’t wait to wear the new kits.”

In a video released on Nike's Twitter page, the kits were shown off alongside styles from all over the world, which will all be worn at this year's FIFA Women's World Cup in France. The kits can all be seen unveiled on a catwalk, and the range of colours, patterns and designs is pretty breathtaking.

The England home kit will be debuted by the Lionesses at Manchester City Academy Stadium on April 5. They will be playing Canada. The team are currenty on a high after winning the SheBelieves Cup in the USA earlier this month. Winning 3-0 against Japan in Florida, USA, it was the team's first time winning this specific cup.

According to the BBC, the team's manager, Phil Neville, said of the win: "It was a sensational performance... it's great for everybody but I think we have bigger things to aim for. We will enjoy it but tomorrow we will look forward to the April camp."

Roll on April 5 — I can't wait to see those brand new kits in action!