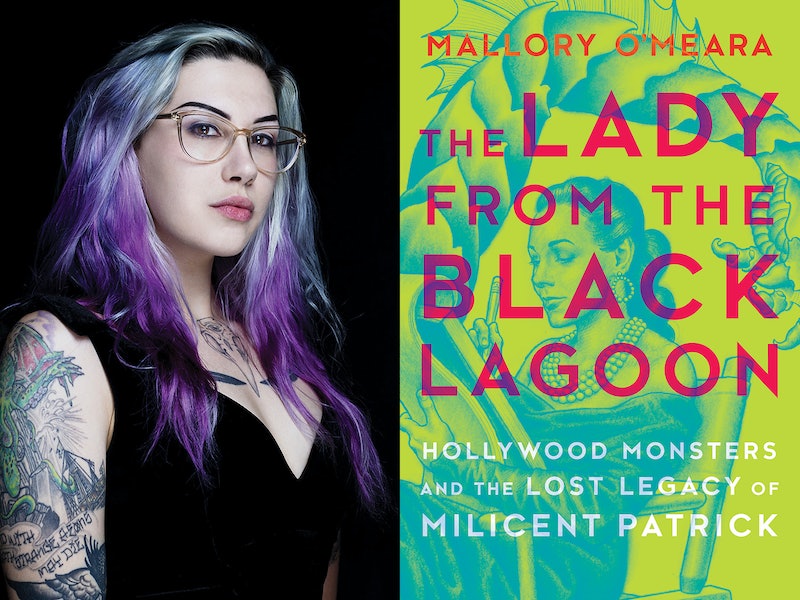 The history of the classic movie Creature from the Black Lagoon is probably not something you have spent much time thinking about, unless you're a film-buff or diehard horror fan. But a new book might just convince you to give the Creature — and the woman who created it — a second thought. In the forthcoming nonfiction book The Lady from the Black Lagoon, screenwriter and genre film producer Mallory O'Meara explores the life and legacy of Milicent Patrick, the only woman to have designed an iconic movie monster: The Creature. You probably haven't heard of her — because her contribution to the film was almost entirely erased from the books.

O'Meara, a woman who also works in Hollywood as a writer and producer for Dark Dunes Productions in Los Angeles, knows exactly how things like this happen, because she lives this reality daily. In the book, she intersperses her own experiences in Hollywood with the story of Milicent for an expansive examination of how women in cinema are undermined, uncredited, harassed, and ultimately, forgotten.

The Lady from the Black Lagoon doesn't hit bookstores until March 5, 2019, but Bustle has a sneak peek at the cover and the book below. In the excerpt, O'Meara explains how she came to know the story of Milicent Patrick and drops some painful truths about the realities of working in film as a woman.

The Lady from the Black Lagoon: Hollywood Monsters and the Lost Legacy of Milicent Patrick by Mallory O'Meara, $26.99, Amazon or Indiebound

In 1954, Milicent Patrick was an artist working for the world-renowned special effects shop at Universal Studios in California, the movie company famous for its monsters. Dracula, the Mummy, the Wolfman and Frankenstein’s monster all had leaped from the studio there onto the silver screen and eventually, into the pantheon of film legends. That year, Universal was gearing up to unleash their latest horror creation upon the world, Creature from the Black Lagoon, and Milicent Patrick had just made history by designing it. No woman had ever designed a monster for a major motion picture before.

Universal sent Milicent on a press tour across the country to promote the film. During the months she was away, a storm of resentment and jealousy raged back at the studio. The head of the makeup shop, a man named Bud Westmore, wanted the recognition Milicent was getting. Even though he received sole on-screen credit for the Creature, he couldn’t stand seeing Milicent in the spotlight while he stayed behind at Universal. By the time she returned to Hollywood, she no longer had a job. He pulled her from the film projects she had already started working on and refused to hire her for future work.

After that, Milicent never designed another monster. She never designed anything for film ever again. Her name faded into obscurity while the Creature went on to become one of the most iconic movie creations of all time.

No woman had ever designed a monster for a major motion picture before.

On-screen credits in the 1950s were not as comprehensive as they are today; her name does not appear anywhere in the film. Her contribution to cinematic history soon sank into a black lagoon of its own. The only people who remembered her were dedicated monster fans. Even they were in the dark as to where she went, what happened to her.

That’s where I come in.

Until I started writing this book, the previous few paragraphs were all I, or any of my horror film colleagues, knew about Milicent Patrick. She is, at the time that I write this in 2018, still the only woman to have designed an iconic movie monster. Her rise, fall and disappearance behind-the-scenes in Hollywood is the type of story films are made of, the type of story that needs to be told.

This book started as a straightforward biography, the fascinating story of a fascinating person. But the more people I told about the project, the more I was asked why I was doing it. She was some woman who designed a monster for an old black-and-white movie. Why was that important?

It was a good question to think about as I began to spend all my savings and all my spare time investigating what happened to this woman who I didn’t know and wasn’t related to. Why was I doing this? Why did it matter so much?

When I first heard Milicent’s story, my heart lurched with a terribly familiar ache. Hearing about a career beset by sexism, I could easily put myself in her shoes. I have the same pair — every woman in film has them. They’re standard issue and they’re uncomfortable as hell. Almost every day of my life as a filmmaker, I face the same kind of infuriating, misogynistic bullsh*t that Milicent faced in 1954. I didn’t have to imagine what it felt like for her because I constantly feel it myself.

So many women share this experience, women in every profession. We’re ignored, sexually harassed, talked down to, plagiarized and insulted in and out of the workplace. It’s worse if you’re a woman of color, a queer woman, a disabled woman, a trans woman and worse still if you’re a combination of any of these. I don’t know a single woman working in my field, or any creative field, or any field at all, who cannot relate to Milicent Patrick. It’s not just her story. It’s mine, too.

This toxic environment made it difficult to uncover much of Milicent’s history. The sad truth is that many of the male collectors and historians I spoke to who had pic-tures or information about her were only interested because she was gorgeous, not because of her artistic talent. Some openly scoffed at the project and doubted her contribution to film history. But I never doubted Milicent. From the first time I saw a picture of her, I knew she was exceptional.

I don’t know a single woman working in my field, or any creative field, or any field at all, who cannot relate to Milicent Patrick. It’s not just her story. It’s mine, too.

I was seventeen years old when I found out about Milicent Patrick.

I had just finished watching Creature from the Black Lagoon for the first time. Like millions of viewers before me, I was completely entranced. The film is a masterpiece. Over sixty years have passed since it was released and it’s still stunning. The story, about a group of archaeologists who travel to South America to investigate the mysterious fossil of a fish-man hybrid, is compelling. For an old monster movie, it holds up. The cast is a pleasure to watch, with lead Julie Adams lighting up the screen.

As with all great monster movies though, the true star is the Creature himself. He is still one of the best designed and recognizable movie monsters in Hollywood history. The pairing of grace and primal power as he moves through the murky depths of the lagoon is astounding. You can’t tear your eyes away from the horror and beauty of his longing as he swims beneath the heroine. The Creature is absolute movie magic.

Like all the best magic tricks, I needed to know how it was done.

This is a normal thing for me. I see a great movie, look up everything about it online and learn about all the people and processes involved in creating it. That’s just what nerds do. But this time was different.

All of the well-known special effects artists are men. The Wolfman, Frankenstein’s monster, Dracula, King Kong, Godzilla — the artists who created all of them were male. Even the most devoted monster geek —which, at seventeen, I already was — would have a hard time naming a woman in the field.

This didn’t seem strange to me. It was status quo. All of my monster-making heroes — Rick Baker (American Werewolf in London), Tom Savini (Dawn of the Dead), Dick Smith (The Exorcist), Jack Pierce (The Wolfman, Frankenstein) — were guys. I had never seen myself reflected in the world of horror filmmaking. The possibility of it never crossed my mind.

Even the most devoted monster geek —which, at seventeen, I already was — would have a hard time naming a woman in the field.

So, I sat at my computer and read about Creature from the Black Lagoon. I happily stuffed new movie facts into my brain. Directed by notable 1950s science fiction director Jack Arnold, shot in 3D, inspired by Beauty and the Beast; cool, cool, cool. I scrolled down and studied the black-and-white behind-the-scenes photos.

Then, there she was.

A beautiful, statuesque woman leaning over the Creature with a paint brush. Milicent Patrick, animator and creature designer, the photo caption said. She worked on the monster suit with an easy confidence and a broad smile. This woman would have turned heads in any room she walked in. But standing on a film set, working on amazing special effects, she was galvanizing to me.

She clearly didn’t fetch coffee for anyone. She wasn’t someone’s assistant. She wasn’t being helplessly carried away in the arms of the monster. She was creating it. Looking at this picture was like being struck by lightning. It was the first time in my life I had ever seen a picture of a woman like that.

Milicent was holding a door open for me that I never realized I had considered closed. Come on, she said. We belong here, too.

I accepted her invitation. I make monster movies for a living. I produce them, I write them. Over the years, I searched for information, for anything that could tell me more about her. For all of my adult life and film career, Milicent Patrick has been a guiding light, a silent friend, a beacon reminding me that I belonged.

But while Milicent opened the door to horror filmmaking for me, the door to her own story was closed. Information on her life was scarce and often contradictory. Some claimed that she didn’t design the Creature at all.

As I worked my way into the business, I thought of all the girls in the world, girls who love monsters, girls who love film. These girls are sitting on the sidelines, not content to watch, but filled with a frustrated desire for momentum and creation. All these girls are potential artists, designers and filmmakers. It’s so difficult to be something if you cannot envision it. To see no way in, to see the world that you love populated exclusively with those who are not like you is devastating.

I wanted to whisper in all those thousands and thousands of ears that yes, you belong. Yes, you can do it. Look, look at this woman, she did it, and she did it way back in the 1950s. Seeing Milicent Patrick work on the Creature blasted open my mind and I wanted to amplify that force, immortalize it.

Reprinted from The Lady from the Black Lagoon: Hollywood Monsters and the Lost Legacy of Milicent Patrick. © Mallory O’Meara, 2019. Used with permission by Hanover Square Press/HarperCollins.

More like this
The 'Lady Chatterley's Lover' Book Leaves Us With A Troubling Question
By Catharina Cheung
Liz Feldman Explains The 'Dead To Me' Series Finale & Fan Theories
By Brad Witter
Lindsay Lohan Just Recalled A Hilarious 'Parent Trap' Story
By Sam Ramsden
Then Vs. Now Photos Of The 'Enchanted' Cast In 2007 & The Sequel's Stars In 2022
By Marina Watts
Get Even More From Bustle — Sign Up For The Newsletter