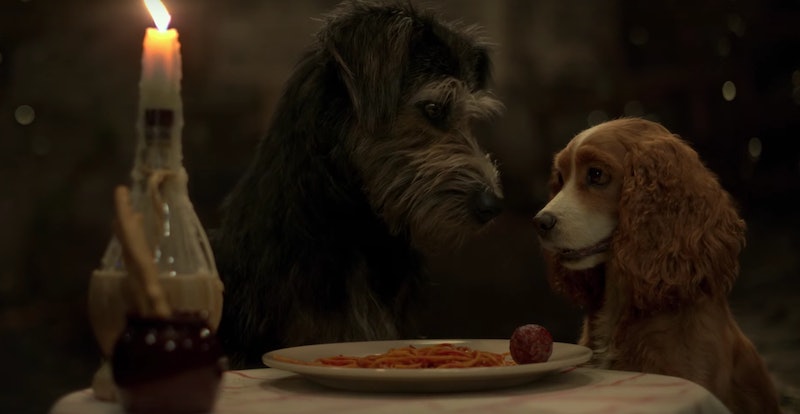 We all know how easy it is to fall in love with dogs, but how easy is it for dogs to fall in love with each other? Turns out, all they need is a romantic candlelit dinner of pasta and meatballs, as seen in the Lady and the The Tramp live-action movie trailer. The movie, which will be released on Disney+ Nov. 12, stars Tessa Thompson and Justin Theroux in the title roles, and, based on the trailer, it looks like it's everything your Disney-loving heart could ask for.

The first trailer for the live-action Lady and the Tramp movie debuted at Disney's D23 Expo on Friday, Aug. 23. And, as a special treat, the real dogs who play Lady and Tramp (with the assistance of some CGI magic), were also present at the presentation. The dogs may be voiced by Thompson and Theroux, but it's the rescue dogs Monte, a 2-year-old terrier mix, and Rose, a cocker spaniel, who steal the show. Just look at how cute they are, running around town, breaking Lady out of her domestic home, and, of course, eating that iconic plate of spaghetti. It's like they were born to be stars! Or, at the very least, born to be the stars of a live-action Lady and the Tramp.

The trailer also featured a glimpse at a few other beloved dog characters from the original, including Trusty, who will be voiced by Sam Elliott, and Jackie the Scottish Terrier (originally Jock in the animated classic), who will be voiced by Ashley Jensen. And, what live action Lady and the Tramp trailer would be complete without a new recording of "Belle Notte"?

Unfortunately, fans hoping to catch a glimpse of Janelle Monáe's Peg are out of luck. The singer and actor will play the sassy dog Lady meets at the pound, but she'll also be performing two original songs for the film, and help develop some original music for the film. In an effort to update Lady and the Tramp, Disney's live-action version will no longer feature "The Siamese Cat Song" or the Siamese cats, which have long been criticized as mocking Asian stereotypes. Instead, according to a report from Variety, the studio asked Monáe's Wondaland to come up with something new to replace it entirely.

Of course, in addition to the pups, Disney's new Lady and the Tramp will also feature some actual human characters. Kiersey Clemons and Thomas Mann will star as Lady's owners, Darling and Jim Dear, respectively, alongside Yvette Nicole Brown's Aunt Sarah.

Lady and the Tramp will mark Disney+'s first original movie, but certainly not its last. The film will premiere promptly on the streaming service's launch date, Nov. 12, which will also serve as premiere dates for The Mandalorian, Disney+'s original Star Wars series, High School Musical The Musical The Series, a meta take on the DCOM High School Musical, and the original Christmas film Noelle, starring Anna Kendrick and Bill Hader, among other titles.

Needless to say, fans better get ready to grab their pooch and burry themselves under the covers when November comes around.