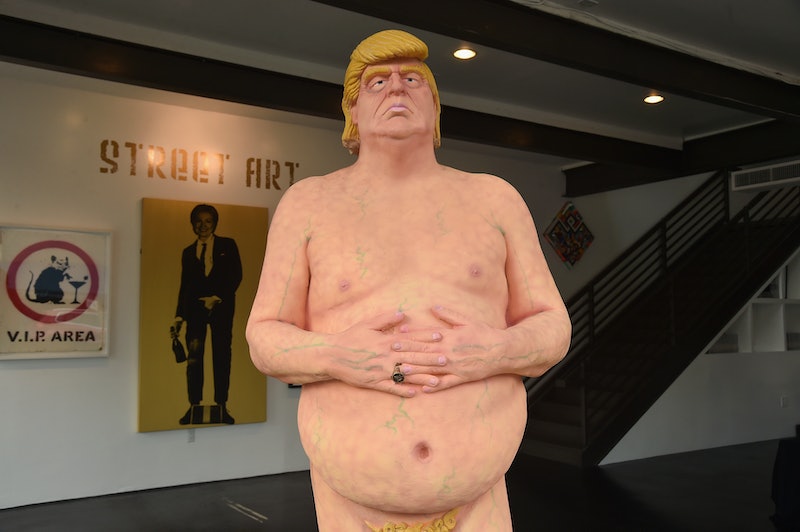 If you have a big chunk of cash to spend and a good friend with an even better sense of humor, then Julien’s Auction might have just the gift for you. The only remaining naked Trump statue is for sale, but it won't come cheap.

Numerous statues of a naked Donald Trump showed up in cities around the U.S. in August of 2016, before the election that made him the president even took place. They're the work of INDECLINE, an anarchist collective, and the collective title for the statues was "The Emperor Has No Balls." The creators, according to the Washington Post, gave the project that moniker as a reference to the "The Emperor's New Clothes" fairytale, in which a boastful emperor finds himself taken down a notch when he's tricked into appearing naked.

They're not flattering; the figures have huge, hanging bellies, and, given their name, you can probably guess that a certain anatomical region is somewhat lacking. Most of the statues were swiftly removed, either by the respective cities or by well-meaning actors who meant to save them. “NYC Parks stands firmly against any unpermitted erection in city parks, no matter how small," the New York Parks Department told New York Magazine after removing the one that was standing in New York's Union Square.

In Seattle's Capitol Hill neighborhood, the statue that appeared one morning was eventually removed not by the city, but instead by a second-hand shop that got the artists' permission to make sure it was kept safe. There must have been more instances like this, because the statue currently up for sale isn't the first one to have been auctioned off. In October 2016, one of the statues went for $22,000 at an auction in Los Angeles, where it was being showcased along with works from Keith Haring and Andy Warhol, among others.

It's a year and a half later and there are no more statues left, though, so The Cut guesses that this final statue could go for even more — think something in the range of $30,000. It's an auction piece, though, so it could be even higher than that — or you might get lucky and get it for a steal. Given the interest that these statues spurred when they first popped up, though, it's unlikely that there won't be plenty of prospective buyers.

The artist behind the statues identifies himself only as "Ginger," and he told the Washington Post in 2016 that the members of INDECLINE had singled him out as their artist because of his skill designing haunted houses. “When the guys approached me, it was all because of my monster-making abilities,” he told the Post. “Trump is just yet another monster, so it was absolutely in my wheelhouse to be able to create these monstrosities.”

The statues, Ginger told the Post, were made out of clay and silicone, and the most difficult part of his design was the grimacing mouth. “He has a very distinct little mouth, the way his chin meets the jowl, it had to look right,” Ginger told the Post.

INDECLINE wasn't new to the field of surprise, illicit artwork before they debuted these statues in August 2016. Previously, they also covered the stars on the Hollywood Walk of Fame with the names of African Americans who had lost their lives to police violence, created an anti-Trump mural on the border wall in Tijuana, and repainted an abandoned landing strip in the Mojave Desert with the words "THIS LAND WAS OUR LAND" to create what they believed was the biggest piece of illegal graffiti in the world. The Trump statues, however, brought them into a whole new sphere of recognition.