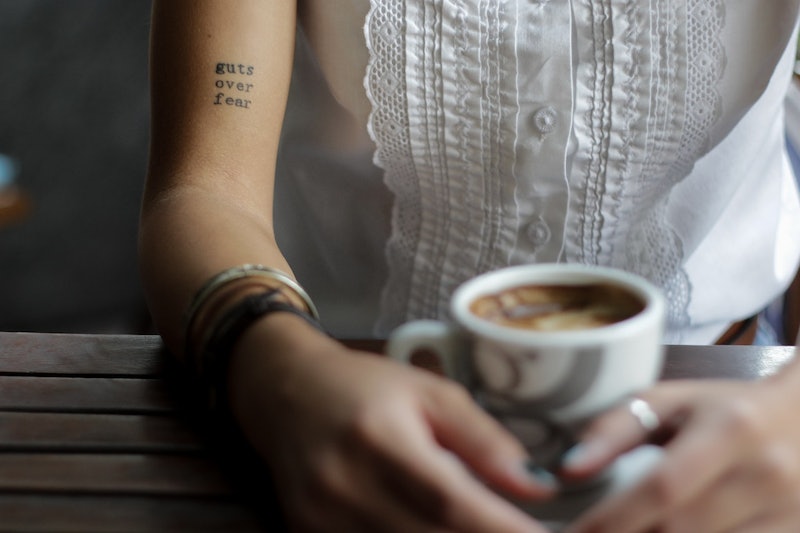 After an interview with an Australian billionaire about Millennials' affinity for avocado toast went viral, discussions about Millennial-spending habits became a hot topic, again. And, experts say eating out is why Millennials are broke. A survey from Princeton Research Associates revealed that Millennials spend more money on dining out, going to bars, buying clothes, and paying rent than other generations. At this point the conversation about how you spend your money is starting to sound like a broken record. Let's unpack this, shall we?

Sarah Berger, cashlorette at Bankrate.com, told Fortune that the small expenses are what's breaking our banks. "[Millennials] want to be more financially independent,” Berger said. “They definitely have the right mindset. It’s just cutting back on those little expenses and then putting that money in a place that they can save it.”

OK, first, let's acknowledge that Millennials are inheriting what can only be called a disaster of epic proportions. Here are some of the things you're likely dealing with: Overwhelming student loan debt; a dying middle class; a struggling economy; the nation's healthcare debacle; and astronomical living expenses. Previous generations have left you with such a pile of dung that Alternet even called Millennials "the screwed generation." And many of you aren't taking this avocado toast insult lying down.

"I was told I had to go to college. My parents said there was no choice. And then I went to grad school. And, with interest, I now owe tens of thousands of dollars that I will never pay off," Los Angeles-based writer and filmmaker Erin Enberg tells Bustle. "There's no way I'm ever owning a house. It's not something I think about. So let me eat my avocado toast in peace. I treat myself when I get paid so I can deal with the rest of my life."

Berger recommends that you save money by using an envelope budget to prevent overspending on small items. "By putting a set amount of cash into separate envelopes designated for activities such as eating out, buying coffee or going out for drinks, the gravity of the amount one spends on small items can be felt. It’s also easier to see visually, how much money one has left," Berger told Fortune.

Call me crazy, but this is an oversimplification of a larger problem, kind of like putting a bandaid on a gunshot wound. Before I became a full-time writer I had a corporate marketing job where I made what most people would consider a lot of money. But, guess what? I still didn't have any. I paid more than 50 percent of my income to rent, and after paying for my car and its insurance, and my other living expenses, I still didn't have enough money left over to pay my student loans.

I was doing everything that was recommended, but I still couldn't get out of my financial hole because I started at a deficit. Unless I moved to the middle of the country where rents are still affordable, there is no way I would ever catch up. And, I am one of the lucky ones. I know that millions of people are struggling far more than I am.

The idea that I would ever be able to save enough money for the 20 percent down payment required to by a house in California is laughable. Houses that are 800 square feet are priced at more than $1 million. I don't think I should have to sacrifice everything I love in order to afford a roof over my head. If that makes me an entitled snowflake then I guess I am.

An investigation by the Guardian found that, "a combination of debt, joblessness, globalization, demographics, and rising house prices is depressing the incomes and prospects of millions of young people across the developed world, resulting in unprecedented inequality between generations."

On average, Millennials earn as much as 20 percent less in their jobs, but pay much more for the education that will get them said jobs. What's more, the investigation revealed that people under 30 in the U.S. have less money than retired people. And, it's not because they can't stop eating expensive food and drinking designer coffee.

"The situation is tough for young people,” Angel Gurría, secretary general of the west’s leading think tank, the Organization for Economic Cooperation and Development, told the Guardian. “They were hit hard by the Great Recession, and their labor market situation has improved only little since."

While the job market has barely budged, housing costs have continued to climb. Despite these figures, people still want to tell you that you are the reason you are broke.

"Everything I’ve made in terms of a pay rise has gone into living and saving," Fiona Pattison, a 30-year-old accounts director at a fundraising agency, told the Guardian. "My lifestyle has remained exactly the same. Any dent in employment or income would mean I’d have to go back to sharing again.”

Sound familiar? It seems the only viable solution is to save all of your money, eat at home (and can we talk about the price of groceries?), and get an affordable apartment in a nondescript city where rent are cheaper but jobs are scarce. Wait, that's not a solution, that just creates a new problem.

Millennials feel understandably bleak about the future, the state of the economy, and the destruction of the planet. Sometimes I ask myself, what is all of this work for? It seems the planet could implode at any time, so for now, please bring me some avocado toast.