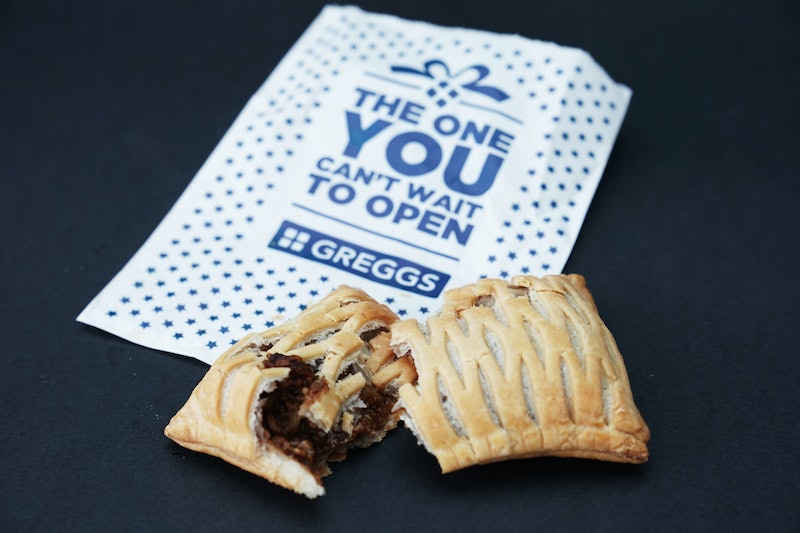 In case you weren't already aware, we are now firmly in Veganuary 2020. It's time to throw out all our meat and animal-based products in favour of some plant goodness. As the vegan movement has grown in popularity, more and more brands have brought out products to accommodate a plant-based diet, including our favourite high street bakery. And following the huge success of the their famous vegan sausage roll, Greggs has now launched a Vegan Steak Bake and the response has been pretty major.

To kick off 2020, Greggs have brought out a new Vegan Steak Bake. Back in August there were rumours flying around about the potential for this release and thank goodness, it's finally here. Instead of using beef or other meats, this steak bake contains quorn, mycoprotein (a meat-free protein), gravy, and onions and it has a 96 layers of puff pastry. Yes, that's right. 96.

The new steak bake was released on Jan. 2 and people have been so desperate to get their hand on this treat that The Mirror has reported that there have been huge queues of up to 20 minutes for it.

If your wondering where you can get your hands on one of these tasty treats, the Vegan Steak Bake is currently in 1,300 Greggs and will be available in another 700 on Jan. 16. If you aren't sure if you're near a branch with the coveted steak bake, Greggs have created a Vegan Steak Bake Finder, so you'll be easily able to locate one. Incredible.

A Greggs spokesperson has said "Greggs has finally put an end to months of speculation by confirming the drop of its Vegan Steak Bake which hits shops today. The leading food-on-the-go retailer has been tantalising Greggs fans in the build up to the vegan friendly launch ... The new Vegan Steak Bake means that the UK's vegans, flexitarians, and Meat-Free Monday advocates can enjoy an alternative to one of Greggs' iconic menu items."

More like this
Boris Johnson’s Leadership Is In Question – Again
By Bustle UK
Martin Hancock’s Wife Played A Key Part In His Return To 'Coronation Street'
By Catharina Cheung
On TikTok, Orange Wine Is The Varietal Of The Summer
By Madeleine Aggeler
Is The Insta-Famous Always Pan Actually Worth It?
By Jessica Goodman
Get The Very Best Of Bustle/UK