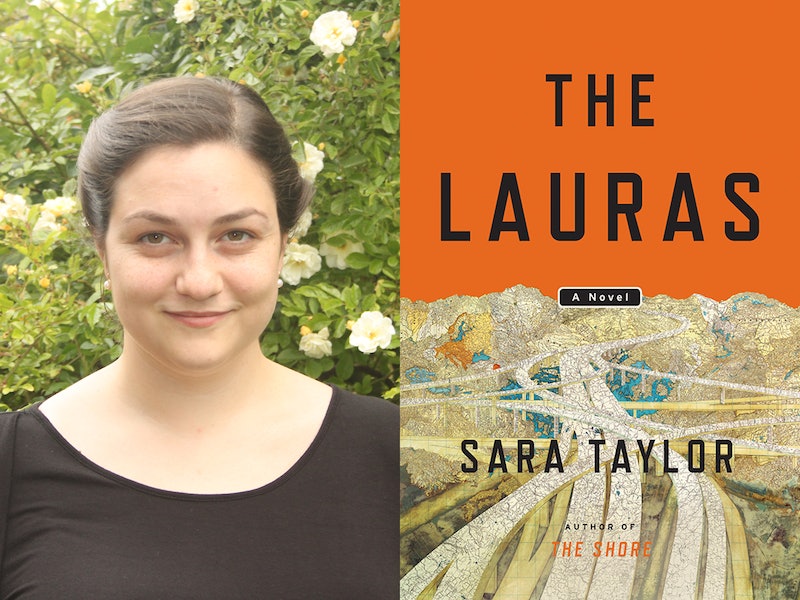 She’s been compared to authors like Margaret Atwood, David Mitchell, James Baldwin, and Jennifer Egan — but even without such impressive praise, Sara Taylor’s second novel, The Lauras, isn’t one you’ll want to miss. Out now from Hogarth, The Lauras is an epic road-trip of a novel, featuring an agender teen named Alex and Alex’s wanderlusting mother, aka: Ma. Transporting readers through a series of makeshift apartments, southern truck stops, Appalachian Mom-and-Pop shops, Florida surfing towns, and finally to California, Taylor’s novel is deeply rooted in place — and that place is vividly small-town America.

The Lauras begins in the wake of a fight between Alex’s parents. It’s the type of fight the teen has witnessed countless times before, but this particular argument turns different when Alex’s mother suddenly leaves home in the middle of the night, taking Alex — clad only in pajamas — with her. This single incident evolves into a years-long road trip across America; one that encompasses much of Alex’s formative, coming-of-age years.

Bustle caught up with Taylor — a Baileys Prize-nominated author for her 2015 debut novel, The Shore — in an interview, just before The Lauras was released this month.

“Being compared to authors who I respect and whose work I love is daunting as all hell,” says Taylor, about the recent praise The Lauras has received. “I tend to either convince myself that they mean a different Sara Taylor, or hide under the bed.”

Taylor’s personal reading list while working on The Lauras included Angela Carter and Margret Atwood, Maureen Duffy’s Love Child and Marilynne Robinson’s Housekeeping. “It’s quite difficult to avoid being influenced to some extent by books that I’ve read, and responding to them in my own work strikes me as both a privilege and responsibility of writing,” Taylor says. “A lot of that responding is partially subconscious. Occasionally, and always unexpectedly, books are inspiring in a ‘what if this went in a completely different direction?’ way, but more often they’re helpful in that they show how other people have handled technical issues that trip me up.”

Though The Lauras began for Taylor as a short story about the kidnapping of a small child by a benevolently-motivated family member, it quickly became clear these characters were the stuff of a novel. “Within the first few pages the narrator’s voice had already skewed older than I intended, and Ma’s background had gotten me curious,” Taylor says. “By the time they made it to Florida, I realized that the story was going to be a novel.”

Both of Taylor’s novels, The Lauras and The Shore, are populated by fierce and dynamic women. Alex, who narrates The Lauras, is surrounded by women who take absolute charge over their own destinies — women who defy conservative families and religious fundamentalists, who stake out their own territory and never say no to an adventure. Alex’s sort-of-kidnapping and journey across the country is informed by “the Lauras” — these rebel women who Ma loved and lost throughout her life.

“As a teenager, I read a lot of coming-of-age novels that, regardless of their themes, all had the seemingly obligatory scenes in which the adolescent characters came to term with their physical development, sexual orientation, or both. For me as a reader, these detracted from the new territory that those novels explored,” says Taylor, when I ask her about the inspiration behind writing an agender teen, and if The Lauras would be a different sort of novel if Alex had a binary gender identity.

“Alex developed as an agender character from the beginning, in much the same way that Chloe from The Shore developed as female. When I was asked to consider assigning Alex a gender I realized that Alex’s genderlessness had allowed me to focus on the dynamics of a parent-child relationship without having to deal with the baggage that comes from a mother-son or mother-daughter pairing, and on Alex’s growing up without getting bogged down in scènes à faire.”

Alex describes the pressure to pick a gender identity as a “war” — one that will inevitably force a choice between identifying with Ma or the father abandoned back home. Alex thinks: “In my mind, that’s what they were asking: do you want to grow up to be like your mom or your dad, Alex. And I still wanted to know why I couldn’t be both, why it was an either/or situation.”

“Both language and categorization are tools that we’ve created,” explains Taylor. “It seems easy to forget that they reflect reality, rather than dictate reality, and that they can change and develop. Overall, I’d like readers to enjoy the book, but if they were to get something deeper out of it I’d hope that it would be a moment of reflection on why that binary exists, what cultural narratives its existence serves, and what sorts of assumptions it supports.”

“Conversely,” Taylor says, “not all readers fit within that binary, and I hope that for those who don’t The Lauras will be a book whose narrator in some ways reflects their experience, in the way that so many books reflect the experiences of those readers whose gender does fit neatly within the binary.”

Alex spends the core of adolescence on the road with Ma wondering if and when they’ll return home and wondering what kind of quest they’re really on. When Alex discovers the road map Ma has been using — and keeping mysteriously private — to guide their journey, Alex discovers they’re taking a road trip not only through the United States, but through Ma’s past as well: settling debts, tying up loose ends, amending past regrets, and ultimately seeking the one Laura whom Ma loved the most. As a result, their journey is not a linear one — states and towns are crossed and then crossed again, they move south to north, before retracing their trail southward once more, moving west to east to west, and so on.

“I did leave the country of my birth at the first opportunity,” Taylor says. “And if a mythical quest were offered me, I’d take it.”

“The quest, as far as I know, is one of the oldest narrative types, and if Chaucer is any example it was popular when most of its audience could expect to die within a few miles of where they were born," says Taylor. "Even though we’re more mobile now as a species there’s still a level of escapism in quests, and metaphorically they easily map onto other life experiences — the search for enlightenment, for personal fulfillment, or simply aging — that are too big to deal with as they are. The road trip story, I’ve been told, is a uniquely American subset of the quest story; there are few things that express the anxious, inescapable forward motion of growing up quite as well as being the passenger in a car that someone else is driving, destination unknown.”

In addition to the tradition of questing that The Lauras so vividly depicts, there's a clear nod to oral storytelling traditions in the novel as well: stories are told within other stories, stories are passed down from Ma to Alex in a way that seems almost sacred at times. I ask Taylor if she grew up with a lot of storytelling in her own family tradition, and about any connections between ancient oral traditions and novel-writing.

“There were a lot of stories told when I was a child, by both my parents, but as I grew older I realized that, because what they told me had been shaped to be pleasing, there was a lot I was missing, that the material between the stories was important also and provided a different picture of reality,” Taylor says. “There, I think, is the big difference between oral storytelling and novel writing: the former tends to be pared down to turn neatly in a tiny space, while the latter has space for the connections between what could be individual anecdotes. Often the wonder of novels is in the interactions between those parts, and how the little pieces gain meaning from their proximity to each other.”

So much of The Lauras is about daring to get lost in the wilderness, to find stillness in the unknown, to allow answers to be revealed in their own time. In one of the first towns Alex’s mother decides to set up camp, Alex beings to fill each day with solo-wanderings up and down the Appalachian mountainsides, thinking: “I was freed from the fear of getting lost, because I was lost.” I ask Taylor is she sees a power in being lost, maybe even in staying lost?

“If you plan a journey from beginning to end and stay on the mapped route, you can’t discover anything except for what you intended to discover when you made the plan,” Taylor says. “So, I think there is a value in getting lost, or letting go of the plan and seeing the shape of reality as it is. That is more or less the situation in which we leave Alex at the end of the novel: accepting that ‘lost’ is a viable state of being and willing to see where that lostness leads.”