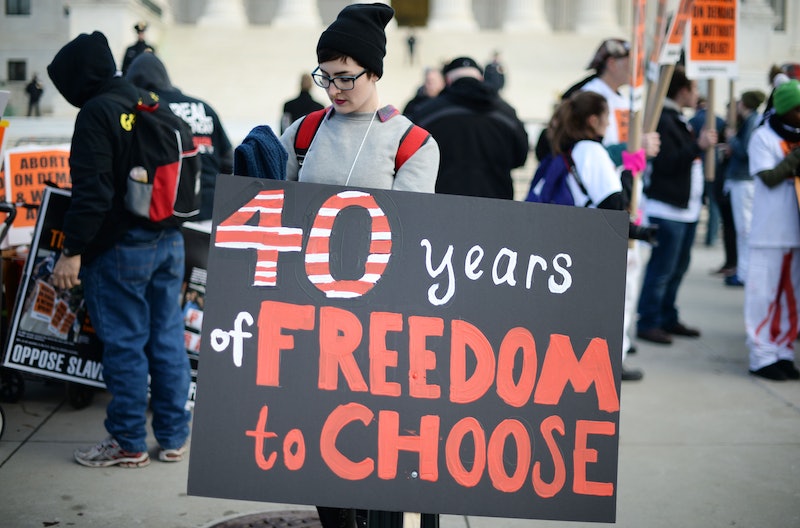 On the 44th anniversary of the Supreme Court's landmark decision in Roe v. Wade, the lawyer who argued the case issued a warning about the state of reproductive rights in America. In an interview with NBC News, Sara Weddington said President Donald Trump and the current Republican-controlled Congress pose a major threat to both Roe v. Wade and women's reproductive rights. With a quick glance at both conservative lawmakers' political agendas and the current state of abortion access, it's not hard to see why Weddington thinks abortion rights will face their greatest challenges in the next four years.

While reproductive rights have faced numerous challenges since the Supreme Court ruled in 1973 that a woman's access to abortion was a constitutional right protected by the 14th Amendment, the state of abortion access isn't looking good. According to a year-end report from the Center for Reproductive Rights, lawmakers passed more than 60 new restrictions on abortion access in 2016 alone. On Friday, a man who not only vowed to nominate a Supreme Court justice that was committed to overturning Roe v. Wade but who also once said women should be punished for having abortions was sworn in as president. Later, Trump claimed that he meant only the doctors performing abortions should be punished.

"I think everyone who cares about the Roe v. Wade issue and other reproductive rights is very concerned about what will happen," Weddington, who'd argued the case before the Supreme Court on behalf of its plaintiff, told NBC News. According to Weddington, the fight to protect reproductive rights has become "harder than ever" as Trump's stance on abortion is "basically opposed" and "there are far fewer outspoken pro-choice Republicans today than there were back in the '60s and in the early '70s."

Weddington's point about the threat the current Republican-controlled Congress poses couldn't have come at a more appropriate time. Emboldened by Trump's election, a national version of the controversial Heartbeat Bill, which would effectively ban abortion as early as six weeks, was introduced to Congress on Jan. 12. HR490 aims to prohibit abortion in any instance in which a fetal heartbeat can be detected. Because fetal heartbeats can be detected as early as five or six weeks after conception – a time when many women are just discovering they're pregnant – the bill effectively represents a total ban on abortion.

But while conservative lawmakers may seem determined to roll back women's reproductive rights, a recent survey conducted by PerryUndem Research/Communication for The National Institute for Reproductive Health has found that American voters are not as divided over abortion as previous polls have suggested. According to the report, 76 percent of those surveyed wanted women to be able to legally have an abortion. A majority of surveyed voters also said they wanted a woman's access to abortion to be safe, affordable, and easily accessible. Of the 1,109 registered voters surveyed, 63 percent said they felt laws aimed at restricting access to abortions were "going in the wrong direction."

Although it's impossible to predict exactly what impact Trump's presidency will have on Roe v. Wade and women's reproductive rights, it's important to be vigilant in rebuking any attempt to roll back those rights as abortion constitutes basic healthcare.

"A lot of people have invested time and resources to ensure all women have access to all their reproductive choices," Weddington wrote in November in a post-election statement posted to her Facebook page. "These people must keep working. And they must reach out to younger people who have the energy and passion to continue this fight."