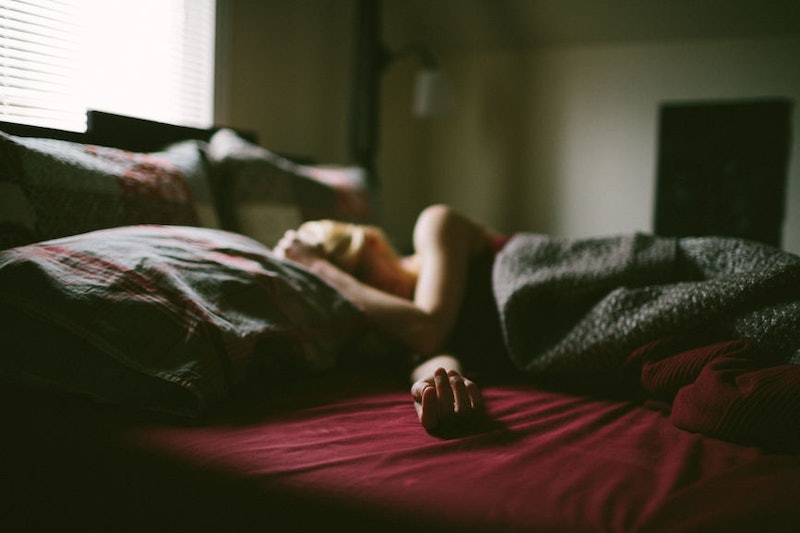 176 million people worldwide have endometriosis. Despite its prevalence, many people don’t know what it is. It's not talked about, it's under-researched, and it's persistently underfunded. For Endometriosis Awareness Month, Bustle UK is hearing from people living with the condition and doctors who specialise in it, and is opening up the conversation to help you get the treatment you deserve.

Endometriosis is defined as "a condition where tissue similar to the lining of the womb starts to grow in other places, such as the ovaries and fallopian tubes." Arguably, the symptom people most commonly associate with the condition is pain. Indeed, as the NHS website notes, sufferers can find this to be a major element of the condition, listing the following as main symptoms:

In short, endometriosis can cause a whole lot of pain, be it whether you're on your period or during sex. But that is definitely not all it is.

The NHS also lists many other symptoms, including "feeling sick, constipation, diarrhoea, or blood in your pee during your period," as well as much heavier periods. When talking to Lola Ross, a qualified BANT and CNHC nutritionist specialising in women's health and part of the founding team of Moody Month, it quickly became clear to me that there are a seemingly endless amount of ways endometriosis can affect people, from spotting and blood clots to extreme tiredness.

"Due to the fluctuating hormone activity found in [people] with endometriosis, spotting which can occur at any point during the cycle is common along with heavy bleeding and large blood clots. Irregular bleeding and bleeding/cramping from the bowel is often reported," explains Ross. "Migraines and fatigue are also common," she adds.

Unfortunately, some people also find they struggle to get pregnant, and can suffer with infertility issues due to the condition. In fact, Ross explains that in the UK, "endometriosis associated sub-fertility is thought to affect up to 50% of [people]."

"Impaired fertility can arise in some [people] due to the structural changes that can occur in the fallopian tubes. These changes can reduce their ovulation supporting functions and reduce fertility. Painful intercourse may also interfere with the ability to enjoy sex, further reducing the opportunity to conceive."

The often forgotten impact of these physical effects takes its toll on people's mental and emotional wellbeing. In addition to suffering with upsetting physical symptoms, Endometriosis can lead to illnesses such as depression, due to the physical toll it can take and the infertility struggles it can cause.

"The emotional impact of endometriosis can be onerous and low moods, exaggerated PMS and depression is common due to the hormone imbalance," confirms Ross.

"But also just from living with a chronic hidden condition like this, being unable to talk about these sorts of chronic symptoms freely at work or in relationships can have a big impact on mental health and well-being."

This can inevitably lead to time off work and a constant strain on relationships, meaning a further impact on daily life.

Endometriosis can take its toll physically and mentally, so it's important to consult your doctor regularly about the best possible treatment and support options. It's also advisable to look for support from charities such as Endometriosis UK, who have a wealth of resources, and can offer some invaluable help for those in need.