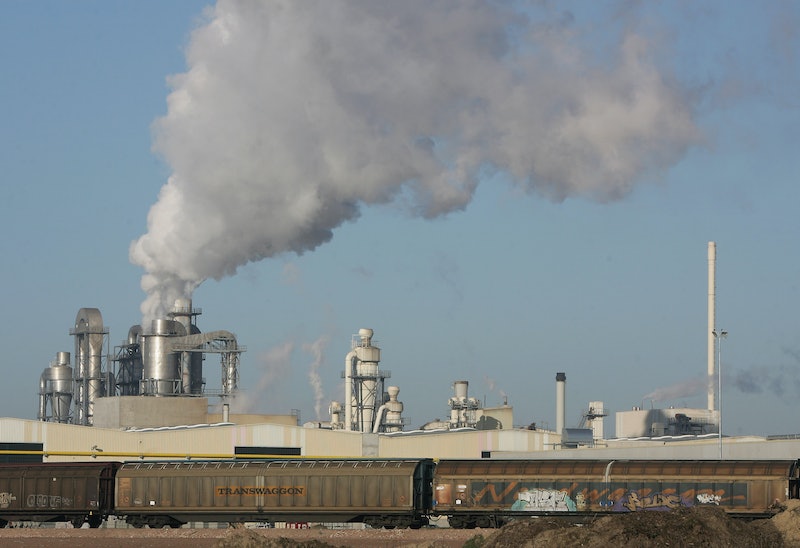 Humanity just hit a new milestone, and it's not a good one. The level of carbon dioxide in the atmosphere right now has exceeded 415 parts per million for the first time in human existence, CNN reported on Monday. The troubling finding is based on a Sunday report released by sensors at the Mauna Loa Observatory and tweeted by the Scripps Institution of Oceanography. The observatory is part of the National Oceanic and Atmospheric Agency.

The current CO2 level, which is 415.26 parts per million, is far more than any level in the past 800,000 years, CNN noted. Naturally, the research has unsettled meteorologists, to say the least. Eric Holthaus, a meteorologist for the environmental news agency Grist, tweeted about the amount of carbon dioxide on Sunday and noted that humans, as an entire species, have never known such a level before.

"Not just in recorded history," Holthaus tweeted, "not just since the invention of agriculture 10,000 years ago. Since before modern humans existed millions of years ago. We don't know a planet like this." The data was shown through the Keeling Curve, which is a graph named after the late scientist Charles David Keeling. In the 1950s, Keeling focused on studying the rising levels of carbon dioxide in the earth's atmosphere for his research on global warming.

It's probably worth studying the amounts of carbon dioxide in our atmosphere over different ages and periods to make sense of how urgent the Sunday report is. According to CNN, for example, the atmospheric level of carbon dioxide in the Pliocene Epoch — an epoch in the Tertiary Period of the geologic timescale that took place millions of years ago — ranged between 310 to 400 parts per million at that time.

With the rising levels of carbon dioxide over the years, the earth's temperature has gone up due to CO2's ability to retain and absorb heat. Both phenomena have a mostly directly proportional relationship, according to the National Centers for Environmental Information. This means that if there is a low amount of carbon dioxide in our atmosphere, our global temperature tends to cool down as well.

At its root, the rise in carbon dioxide can be due to the burning of fossil fuels. Think of resources like coal, oil, and gas, which release greenhouse gases like CO2 into our air. Along with this, the natural burning of forests (or manmade activities like deforestation projects) can cause an increase in atmospheric carbon dioxide and thus, higher global temperatures.

Environmental experts have urged people to make an effort to decrease their carbon footprint, including tackling the issue of greenhouse emissions. It's for an important reason, as the NOAA noted in 2018. The agency stated that "increases in greenhouse gases have tipped the Earth’s energy budget out of balance, trapping additional heat and raising Earth’s average temperature."

As National Geographic reported in February, increased and unchecked amounts of carbon dioxide created by emissions from cars, planes, factories, and other manmade sources pose the risk to severely harm people's health. The Mauna Loa Observatory's finding seems to reaffirm National Geographic's report on our environment's condition — and what that could mean for our future.