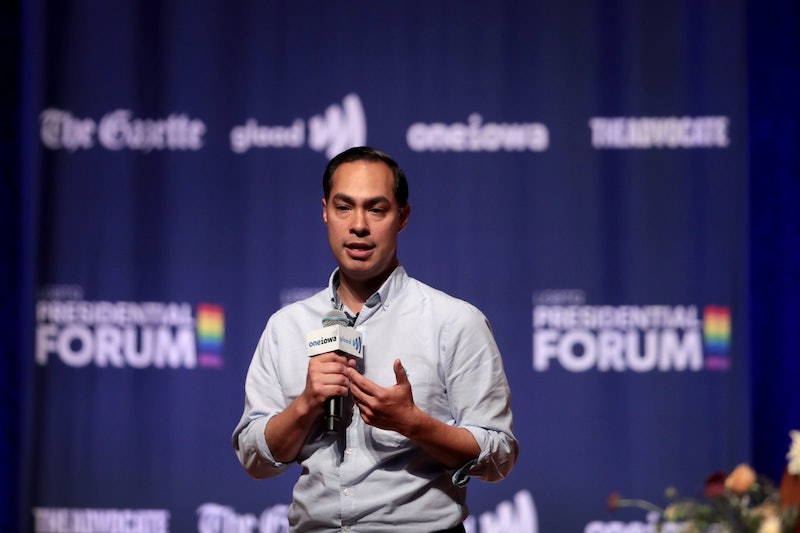 More than half of the Democratic presidential candidates will take the stage on Thursday to talk about LGBTQ issues in a CNN town hall, co-hosted by the Human Rights Campaign Foundation. The fact that the event even exists is historic and shows how far the country has come, experts say, but they expect the candidates to address the many ways lesbian, gay, bisexual, transgender, and queer people are still at a disadvantage. And advocates tell Bustle that at Thursday's town hall, they want to specifically hear how the 2020 candidates plan to stop violence against LGBTQ people.

The town hall follows a similar LGBTQ forum held in September, making it the second event of its kind since 2007, when none of the presidential candidates at that time publicly supported marriage equality. "The Power of Our Pride presidential candidate town hall will put front and center the issues most important to those who care about fairness and equality for the LGBTQ community," HRC President Alphonso David said in an email statement ahead of Thursday's town hall.

At the September forum, Massachusetts Sen. Elizabeth Warren read aloud the names of the 18 transgender women of color murdered in 2019. New Jersey Sen. Cory Booker also talked about violence against black trans women and the fact that 30% of LGBTQ youth reported missing at least one day of school in the past month due to feeling unsafe or uncomfortable, according to a 2013 survey by GLSEN, a nonprofit that advocates for safer schools for LGBTQ youth.

All the advocates Bustle spoke with say discussing the violence LGBTQ people face, particularly trans women of color, is incredibly important, but they want to hear more than just the statistics that reveal how bad the problem is — they want to hear solutions.

Gillian Branstetter, media relations manager for the National Center for Transgender Equality Action Fund, tells Bustle that when people talk about the violence LGBTQ people face, they always say "'We have to talk about the murders of black transgender women. We have to do something,'" she says. "That's great, but what do you want to do? What are actually the things that will reduce violence?"

Branstetter says she expects all the candidates to talk about their support for reversing the ban on transgender people serving in the military, and support for The Equality Act, a bill passed by the House that would ban discrimination based on sexual orientation and gender identity, among other demographics. But she would also like to hear candidates talk about anti-hate crime measures like the NO HATE Act, which was introduced in the House in June by Reps. Pete Olson (R-Texas) and Don Beyer (D-Va.) and would "improve reporting and expand assistance and resources for victims of hate crimes."

Casey Pick, senior fellow of advocacy and government affairs for The Trevor Project, a nonprofit that works to prevent LGBTQ youth suicide, says the candidates also need to talk about how they would collect better data on violence. Pick points out that the Obama administration planned to include sexual orientation and gender identity questions in federal surveys, which would help the government better understand and address anti-LGBTQ violence. That data collection was rolled back under the Trump administration in 2017, because the Justice Department questioned whether it was "appropriate," NPR reported.

Pick says candidates need to discuss recommitting to those data collection efforts, especially if they're going to talk about the murders of trans women of color, who are often misidentified in reporting about them, or whose deaths might not be reported on at all. "I would love to hear a commitment from these candidates to recognizing the identities of all LGBT people," she says, "and, particularly if we're going to invoke the deaths of trans women of color, there should be a commitment to ensure that we are appropriately identifying all of these folks."

Zeke Stokes, chief program officer at LGBTQ media advocacy organization GLAAD, wants to hear the candidates say that they would declare the violence against transgender women a national emergency. "We need to hear from them that they will direct the Justice Department in their first 100 days to begin treating this as a law enforcement crisis across the country," Stokes says.

He says candidates could also talk about how their DOJ would work with law enforcement agencies to better educate them about investigating violence against trans women of color, "to ensure that we're able to put the full strength of the American law enforcement apparatus behind ending this epidemic."

Former Houston Mayor Annise Parker, who is now the president and CEO of LGBTQ Victory Fund, a political action committee that works to increase the number of LGBTQ people in government, says candidates should talk about having a Justice Department that will not only rigorously track and prosecute violence against trans women, but will also protect transgender students.

Parker points out that, in 2017, the Trump administration's Departments of Justice and Education reversed Obama-era rules that directed schools to recognize transgender students' identities and protect them from discrimination and harassment. She says the candidates need to assure voters that their attorney general, secretary of housing and urban development, and secretary of education will be people who support LGBTQ rights. "They need to pledge to appoint a cabinet that both reflects the entire population of America as much as possible, but also protects Americans," she says.

Pick adds that any potential president's efforts to protect Americans need to start earlier by targeting the discrimination, violence, homelessness, and suicide among LGBTQ youth. She says she was appreciative that most of the candidates have at least mentioned conversion therapy, a discredited practice that aims to change someone's sexuality and often involves violent tactics, but she wants them to talk about how they would end the practice entirely. Two pieces of federal legislation that would help stop conversion therapy are the Therapeutic Fraud Prevention Act, "which would instruct the FTC [Federal Trade Commission] to treat conversion therapy like the fraud that it is," Pick says, and the Prohibition of Medicaid Funding for Conversion Therapy Act.

Pick also hopes the candidates talk about rates of suicide among LGBTQ youth, who are almost five times as likely to make a suicide attempt compared to heterosexual youth, according to the Centers for Disease Control and Prevention.

Branstetter points out that, because so many trans and LGBQ people live in poverty, they are more likely to experience issues related to climate change, or health care, and candidates can address those concerns "without necessarily having to, or feeling the need to, say the word transgender."

There are a lot of different ways to help stop the violence against trans women of color and LGBQ people, generally, Branstetter says. "We have to do more than just feel guilty about it. We have to actually improve our society in a way that helps people secure the basic pillars of a stable life that many people take for granted."

This article has been updated to include a statement from the Human Rights Campaign.