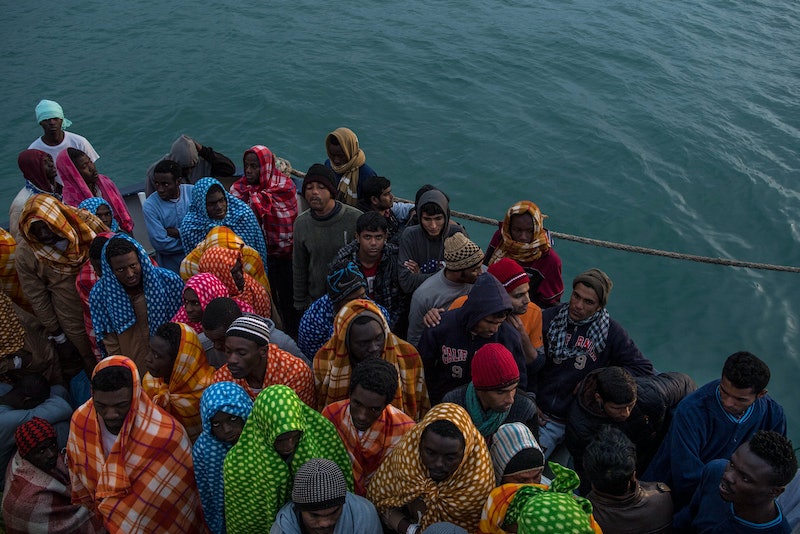 Last week, CNN released an explosive report that drew international headlines, opening up people's eyes to the scale of humanitarian decay in Libya. In a video and accompanying article, the outlet reported the existence of slavery auctions, with human beings being sold off for as little money as $400. The report has stirred up scrutiny over both the current situation and how Libya's ended up where it is right now. But before getting into that conversation, there are some basic things you should know about the Libyan slave trade, and what, if anything, is likely to happen next.

It's important to recognize what's reportedly happening, how prevalent it is, and what's changed in Libya over the last several years to enable it. According to CNN's report, nine different locations, eight of them in the country's northwest region, have held slave auctions. It's believed, however, that many more auctions have taken place at hitherto unknown sites.

The people being auctioned off as slaves are largely migrants traveling northwards from sub-Saharan Africa in an effort to reach Europe. It's an extremely dangerous trek, taking migrants and refugees through Libya and across the Mediterranean, where vessels often crash and leave many dead. Already this year, more than 3,000 refugees have died trying to make the Mediterranean passage, according to International Organization for Migration — just one more facet of the egregious humanitarian crisis.

In short, Libya acting as a sort of bottleneck point for refugees attempting to cross the sea into Europe has left it rife with highly vulnerable, exploitable people; this is, in part, why the slave trade has reportedly emerged there. It's important to note that slavery as a worldwide institution is not rare, and is still a major humanitarian problem. Libya is not unique in this sense, though its slave trade is still an absolute atrocity. What's so startling, however, is the steep slide that's taken place since the Libyan civil war — to the point that, according to Al Jazeera, such auctions are taking place relatively out in the open.

In a statement, Amnesty International's regional director for Europe, John Dalhuisen, criticized the European Union's migration policies for enabling inhumane abuses and deaths — and not just in Libya.

EU migration policy has increasingly prioritised [sic] preventing refugees and migrants from reaching Europe, in the full knowledge that doing so is facilitating the abuse of hundreds of thousands of women, men and children who are trapped en route.

Speaking to Bustle, Amnesty International USA 's Managing Director of Government Relations Adotei Akwei agrees that the crisis is badly exacerbated by the migration policies of the EU, which have sought to block refugees from making it to Europe, thus creating a logjam of highly vulnerable people in places like Libya.

"We have criticized the EU for not only blocking the ability of people to seek safe haven, we've also urged them not to come to any arrangements with certain countries to enforce this policy," Akwei says.

Countries like Turkey come to mind, where there are several million people there who are being held back from getting access to Europe, as a result of an agreement with the Turkish government and the European government. In our opinion, there's no question that the European Union's policies and the implementation of them are contributing to this crisis.

This is not, by all indications, something that was going on prior to the Libyan civil war of 2011, which saw U.S. backed rebel forces depose, and ultimately kill, former dictator Muammar Gaddafi. Despite ruling as a tyrant, threatening a massacre against thousands of his own citizens and amassing what's believed to be one of the largest fortunes in the world through pillaging the Libyan state, Gaddafi's Libya was a far more stable and less volatile place than it is now. Today, rival governments are vying for power, and brutal militants like ISIS are seeking safe harbor.

As such, it's important to recognize the crucial factor that the U.S. and its coalition allies played in the scenes of slavery, as CNN has reported. Once again, as has become a familiar outcome in recent decades, military intervention and regime change have had a devastating effect on the overall stability and functioning society of a foreign state.

According to CNN's initial report, part of the problem is that Libyan authorities cracking down on boats smuggling refugees and migrants out of Libya has meant that such smugglers have a tremendous number of people on their hands, and effectively, at their mercy. This has reportedly made turning to the slave trade an increasing common avenue. Leonard Doyle, Media and Communication Director for the IOM, told Al Jazeera that vulnerable migrants are being thrust into "an extortion machine."

They are robbed of their possessions, their families are called. They are forced, they are tortured, they give them money. And then they are sold. Unbelievable, but they are sold in open, public auctions: $400 for a labouring man, maybe a bit more for a woman who can be put in the sex trade. And this is what's happening across the country.

Slavery is not the only peril migrants and refugees face, either. If they're caught in the course of their travels or end up in detention centers, reports suggest they're at high risk of incidents of physical and sexual abuse, with some suffering torture and rape.

It's important to note that CNN's reporting is far from the first time this issue has been highlighted, but in previous instances it's failed to garner so much international attention. In fact, the IOM sounded the alarm back in April, reporting that slave auctions were being held throughout the country.

It's unclear just how many people have met this fate, but it's clear enough that with tens of thousands of people trying to make the trip into Europe, slavers and smugglers have a large crop of potential victims to choose from.