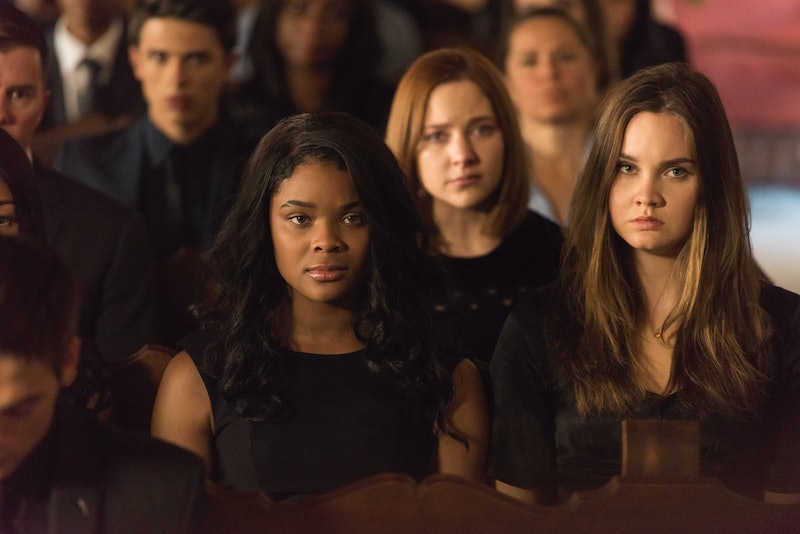 Light As A Feather's first season is hitting Hulu just in time for Halloween. Arriving Oct. 12, the horror series seems like it has all the makings of a hit like Pretty Little Liars — gossip, murder, high school friendships — but with a supernatural twist. And, like PLL, no one is to be trusted: It may look as though they're dying by some demonic force, but any one of the characters in the Light As A Father cast could be the real murderer.

The show is just one in a number of recent forays into teen programming for Hulu — or, more specifically, supernatural teen programming. Following their 2016-launched zombie show, Freakish, the streaming service debuted Marvel's superhero-centric Runaways last November. But Light As A Feather seems to be their darkest endeavor yet, as the trailer teases some truly horrifying imagery in store for those who watch. That could put it in line with a success like Riverdale, which similarly deals with spooky material. And if it does follow that path, prepare yourself to watch its cast skyrocket from a group of relatively unknown actors to overnight sensations. Get to know them below before they maybe, possibly break big.

As one of the surviving members of a game of Light As A Feather that — over time — goes horribly wrong, McKenna begins investigating the case. She's played by Liana Liberato, who's no stranger to dark teen dramas, having previously starred in 2014 film If I Stay. Though her previous credits were mostly supporting roles, Light As A Feather shows Liberato stepping into the spotlight.

The official Hulu synopsis for Episode 6 of Season 1 "…Troubled as the Tide" simply begins "Violet continues her manipulation," which should tell fans everything they need to know about this character. Violet is played by Haley Ramm, best known for playing Brenna Carver on ABC Family's Chasing Life.

Light As A Feather hasn't revealed much about Candace ahead of the show's release, but anyone familiar with the Light As A Feather book series the show is inspired by knows that things get pretty bad pretty quickly for Candace. Will things go similarly for her on the show? Time will tell. What we do know is that Candace is played by Ajiona Alexus, who portrayed Sherri on 13 Reasons Why.

Alex is one of the girls whose game of Light As A Feather ends tragically. There is no character named Alex in the original Light As A Feather book, but she may be based on Mischa. Here, she's portrayed by Brianne Tju, known for roles in shows like See Dad Run and Life After First Failure.

The final of the five girls is Olivia, whose 18th birthday party sets the stage for this fateful game. She's portrayed by Peyton List, who previously starred in Disney's Bunk'd.

Light As A Feather could be a major platform for all of these actresses, but judging by the content of the show, it's safe to say that not all of them will make it to the end of the season. Enjoy your time with the Light as A Feather cast while you can before they eventually get picked off one by one.

This article was originally published on Oct. 11, 2018