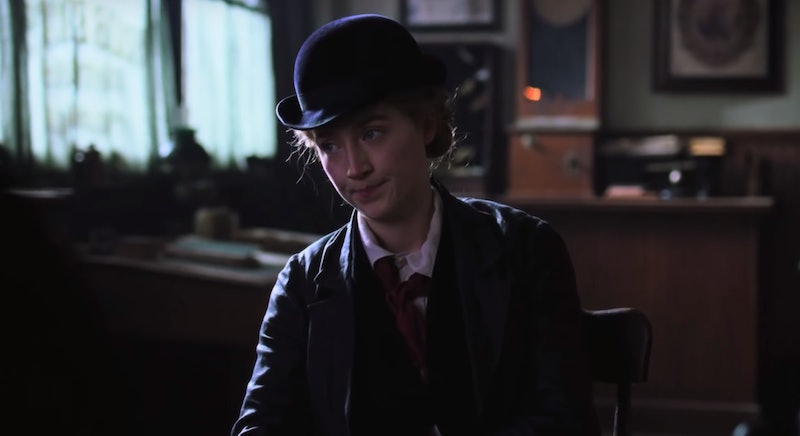 Though it's far from the first time Louisa May Alcott's classic novel has been adapted for the screen, Greta Gerwig's take on Little Women is sure to surprise viewers who were expecting a straight retelling of the lives of Jo March and her family. While the story retains many of the same beats as the novel, Gerwig's version tells them out of order, pulling out key scenes to act as framing devices. The resulting film opens up Alcott's original ending to wider, perhaps more modern interpretations. It's a welcome remix of an old story that, while best known for re-examining gender roles, still maintained some old-fashioned thinking in its ending. Spoilers ahead for the ending of Greta Gerwig's Little Women adaptation!

The story of Little Women remains intact: The film is still about the four March sisters, Meg (Emma Watson), Jo (Saoirse Ronan), Amy (Florence Pugh), and Beth (Eliza Scanlen), and their mother, Marmee (Laura Dern). Each of the sisters is still unique in her hopes and desires for her future, and each struggles to carve out a space for herself in a time that was less conducive to the idea that women could do such a thing. It's a classic coming-of-age story with thoroughly modern themes of independence, solidarity, and love.

That said, Alcott's story was still very much a product of its time, and nowhere was that more evident than in the book's ending. Jo, who spends much of the novel resisting the advances of her best friend Laurie, rejects his inevitable marriage proposal. She tells him she doesn't want to become a wife, and is dead-set on becoming a writer. She's defined by her stubborn independence, which she cherishes and protects fiercely... that is, until towards the end of the novel, when she meets Professor Bhaer, a German academic who ends up winning her over and ultimately marrying her. She ends up giving up her dreams of being a writer and instead goes to teach at an all boys school, following in Bhaer's footsteps.

Jo's independence and determination made her something of a radical figure at a time when women were expected to be obedient and deferential to men. She was an example of a different way to approach life as a woman, and to have her simply be married off at the end of her struggles — to a man who didn't even really understand her work — diminished the book's impact, or at least acted as a frustrating footnote for fans who have long cherished Alcott's classic.

While the film doesn't completely reinvent the ending and still sees Jo marrying Professor Bhaer (who's French in this version), it does cleverly call out the disappointing nature of the book's ending while suggesting that Alcott compromised at the behest of her publishers. It achieves this by remixing the order of events: the film begins with Jo already in New York City pitching her story to publishers, which in turn frames the rest of the film as part of that pitch. This carries on throughout the story, right up to the originally baffling ending that saw Jo suddenly falling in love and willing to give up her dreams for the professor. Right before that happens, the film cuts back to Jo in New York City with her publisher, who tells her that the women in her book must end up married or dead by the end of the story. Ultimately relenting to the mandate, Jo obliges.

It's a subtle subversion of the original ending; one that doesn't do away with it entirely, but is still able to frame it as a strange, almost ridiculous demand placed on female characters in literature. It parallels with Alcott's own story, which saw the author dealing with what were likely similar mandates in trying to sell her story. Jo acts as something of a stand-in for Alcott, which is something Little Women director Gerwig acknowledges and relates to. Speaking with the LA Times, Gerwig said of the opening, "I lifted 90% of the dialogue straight from the book, but there was something about the language, her hesitancy, her willingness to change the work to get the money ... all of that, I just knew through and through." She continued, "I felt it could be me talking to a studio head. It has been me talking to a studio head."

In this way, Gerwig's interpretation of Alcott's ending pulls it into the modern day, giving it a relatable feeling to anybody who's ever tried to "break in" to any kind of creative endeavor. Alcott choosing to marry off her protagonist is reframed as an understandable, calculated compromise to get the work published and keep herself afloat — something that generations of readers, even if they hated that ending, are likely thankful for.