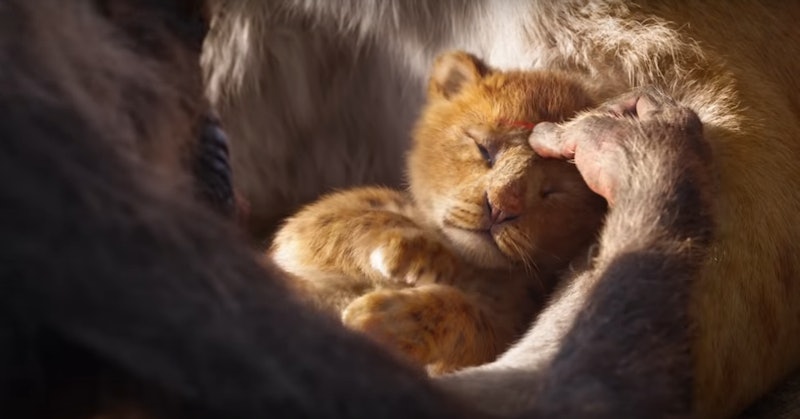 Most people are watching TV on Thanksgiving to catch the football games, but sometimes the commercials are the most entertainment. The live-action The Lion King trailer just came out and people are freaking out. Nothing could ever "replace" the original film, but this movie really has fans feeling all sorts of nostalgic.

The music is familiar, the effects are incredible, and the fans are really hyped up. Yes, there's just a trailer, but this movie already has fans so excited. The trailer is just that good.

There are so many familiar elements from the original film. Of course, there are the same beloved characters. Mufasa even delivers that same iconic line to his son Simba: "Everything the light touches is our kingdom." That alone was enough to evoke some chills.

Rafiki, the baboon, blesses Simba, leaving some red residue on his forehead, just like the character did in the original movie. Not only that, but they included one of the most legendary moments from the movie. Mufasa picks up baby Simba and raises him into the air to "introduce" him to all the subjects in the kingdom.

The fan reaction was very strong. Pretty much everyone had something to say about the trailer. Just imagine how much Twitter will be blowing up when the movie is actually released if people are getting this into a trailer for it.

Even people who did not expect to be into the movie, couldn't help admitting that they are excited for its release.

People just could not help having a strong reaction to that trailer when it aired.

Seriously though! It was tough to not get emotional about it!

As exciting as it is and as great as the movie is bound to be, it's still going to be an emotional journey. One fan remembered one very pivotal moment in the movie. Yes, we will have to watch Mufasa die again. That is going to be a TOUGH one to handle.

Without even seeing the movie, the tears are highly anticipated. Just accept it. The movie has the same storylines and it's going to be a total rollercoaster of emotions.

That trailer took a lot out of some fans.

Everyone is already rushing to see this movie. Unfortunately, it's not out yet, but the fans just won't be stopped.

It's only November, but The Lion King very clearly the most anticipated movie of the summer.

More like this
Jennifer Coolidge Hunted For Jewels & Lashes In J.Lo’s Hotel Room
By Jake Viswanath
Owen Thiele Asked Sundance Attendees About Films That Don’t Exist
By Grace Wehniainen
Keke Palmer Shares The Sex Of Her & Darius Jackson's Baby
By Jake Viswanath
At 28, Rosie Perez Risked Her Career To Stop Playing Stereotypes
By Gabrielle Bondi
Get Even More From Bustle — Sign Up For The Newsletter
From hair trends to relationship advice, our daily newsletter has everything you need to sound like a person who’s on TikTok, even if you aren’t.