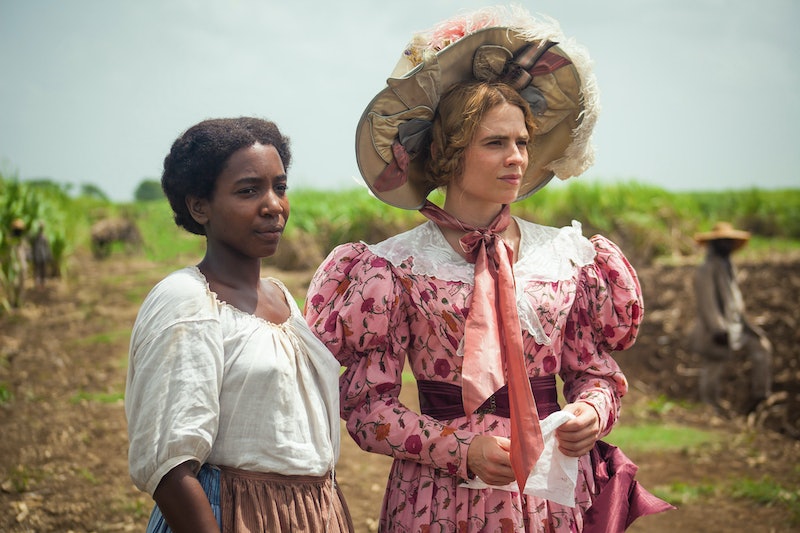 Tonight sees the premiere of a highly anticipated drama from the BBC: The Long Song, an adaptation of Andrea Levy’s 2010 novel which won the Walter Scott Prize and was shortlisted for the Booker. The adaptation stars Tamara Lawrance as July, with Hayley Atwell playing Caroline Mortimer and Sir Lenny Henry playing Godfrey. But what's The Long Song book ending, for those keen to know the plot before watching the series? Keep reading to find out.

After a preface (more on that later), the novel begins with Kitty, an enslaved woman on a British sugar plantation in Jamaica. She’s raped by the overseer of the plantation, and ultimately gives birth to a girl: July. It’s July’s witty and resolute voice that drives the novel; in the preface, she explains that her son, Thomas, is a publisher, who will be printing her memoir. The book is punctuated by Thomas’ frequent attempts to mould his mother’s story into the traditional confines of a novel – attempts that July resists.

As a child, July is taken from her mother by Caroline Mortimer, the sister of the plantation owner, John Howarth. Caroline renames July “Marguerite,” and moves her to the plantation house to be her lady’s maid. At night, Kitty repeatedly sneaks out to the house, hoping to see her stolen daughter through the windows.

July grows up in the house, and is serving Caroline’s guests at her ostentatious Christmas dinner when news of an uprising among slaves across Jamaica — the Baptist War of 1831 — reaches the house. In the following days, Caroline and John leave the plantation, and July starts a romance with Nimrod, a freed slave. They’re found by John, who returns from the vicious suppression of the uprising and shoots himself in the head.

Caroline convinces herself that Nimrod killed her brother, and he’s subsequently pursued and shot by the overseer. Kitty, hearing that the overseer is hunting her stolen daughter, attacks him; she’s later brutally executed, in front of July. A traumatised July gives birth to a son, the outcome of her relationship with Nimrod, and leaves him at the door of a nearby minister who raises him.

After the emancipation of slaves in Jamaica in 1838, a new overseer, Goodwin, arrives at the plantation. He’s idealistic and seemingly kind — and quickly sets his sights on July. To achieve his desires without compromising his supposedly rigid Christian values, he marries Caroline to install himself in the plantation house, and keeps July as a mistress downstairs.

Goodwin’s treatment of the former slaves on the plantation quickly sours when they attempt to assert their rights, refusing to work over four days a week. He hikes the rent for their land to impossible heights, believing they’ll be forced to work for him. Instead, the workers on the plantation strike, and Goodwin suppresses them with force.

In the house, July gives birth to a daughter, Emily, who she initially sees as evidence of her victory over Caroline. But when Goodwin develops a fever, Caroline bars July from seeing him, and Emily, who is light-skinned, is repeatedly taken to spend time with her father. Ultimately, Caroline and Goodwin take Emily with them to England, and July — like her mother before her — is stripped of her daughter.

July presents what happens next as a story of swift recovery: she becomes wealthy selling preserves, and ultimately opens a boarding house, frequented by white people. Thomas, however, disputes her story, while telling his own: he rises from apprentice to owner of a printing company, though he similarly elides his exclusion from white English society.

Thomas moves to Jamaica, where he serves on a jury in the trial of his mother, caught stealing chickens. Her trial exposes the reality of her harsh, unsparing life after losing her daughter. Thomas rescues his mother from the court, and the pair proceed to live together. He presses his mother to end her narrative with the stories of the emancipated slaves on the abandoned plantations; July, however, declines, communicating with her refusal the scarcity of their existences. The novel ends with Thomas’ request for Emily, or anyone who knows her, to write to him.

The BBC One adaptation airs at 9 p.m. tonight, December 18, while the second and third episodes will be broadcast on December 19 and 20, according to the Radio Times. Though it's likely to be faithful to Levy's novel, you'll have to watch the series to find out.