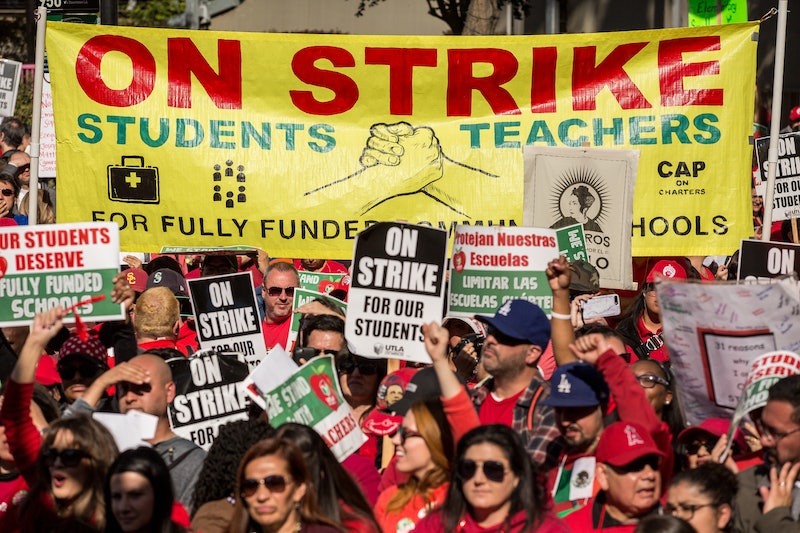 As one momentous worker demonstration ends, another begins. Los Angeles teachers reached a deal with the city on Tuesday that satisfied many of their demands and brought an end to their nine-day boycott. But in the wake of the Los Angeles teachers' strike, Denver's teachers' union is determined to follow suit.

The Denver Classroom Teachers Association, a union that encompasses more than 5,600 educators, has been negotiating for better pay with the city for over a year. The union argues that the current compensation system is inconsistent, provides unjustly low wages, and is responsible for Denver's low teacher retention rate. The Denver Post reports that 22 percent of city educators left their jobs in the last two years, while the attrition rate for teachers nationally is 8 percent, according to the Learning Policy Institute.

"I have to live with multiple roommates just to afford the cost of living," one teacher told FOX31. Denver educators are currently compensated through a "pay-for-performance system" that supplements a base salary with chances to earn bonuses for high student achievement and taking on difficult jobs. Many teachers are frustrated by the arrangement. Some feel that the base pay is too low and that the opportunities for bonuses are too unevenly distributed, according to Chalkbeat.

The Denver union is looking for $8 million more for teacher pay than it's currently been offered by the city, per NBC. Part of this sum, the union hopes, can come from the budget allocated for administrator bonuses. The school district "has made its choice to keep critical funding in central administration, and not to apply more of those funds to the classroom where they would provide the greatest benefit for student learning," union president Henry Roman told NBC.

Teachers could strike as soon as Monday. The school district is worried it may not have enough substitute teachers to fill the vacancies left by striking educators, but it's come up with one potential solution: to use workers furloughed by the government shutdown. Superintendent Susana Cordova announced on Monday that she's been attending events for furloughed federal employees who are looking for job opportunities until the government reopens. They're planning to pay substitutes $212 a day, which is double the normal daily rate, during the strike.

Denver teachers may be hoping their boycott is as impactful as the one that just ended in California. The Los Angeles strike began on Jan. 14 and lasted for nine days, including seven school days. It finally ended on Tuesday as the union negotiated a settlement that many are calling a significant turning point for Los Angeles education, The New York Times reports.

City officials agreed to employ a full-time nurse at every Los Angeles school and librarians at all middle and high schools. Teachers also won concessions involving a 6 percent pay raise, a limit on class sizes, a promise to gradually curtail the number of standardized tests by half, and a vote on a resolution to limit the number of charter schools in California.

Randi Weingarten, head of the American Federation of Teachers, suggested to USA Today that the wave of recent strikes around the country is helping to build public support for teachers' demands. "What has happened this week in Los Angeles," she said, "has shifted the conversation back to where it should be, which is: 'What do we need to do to help students succeed in neighborhood public schools?'"