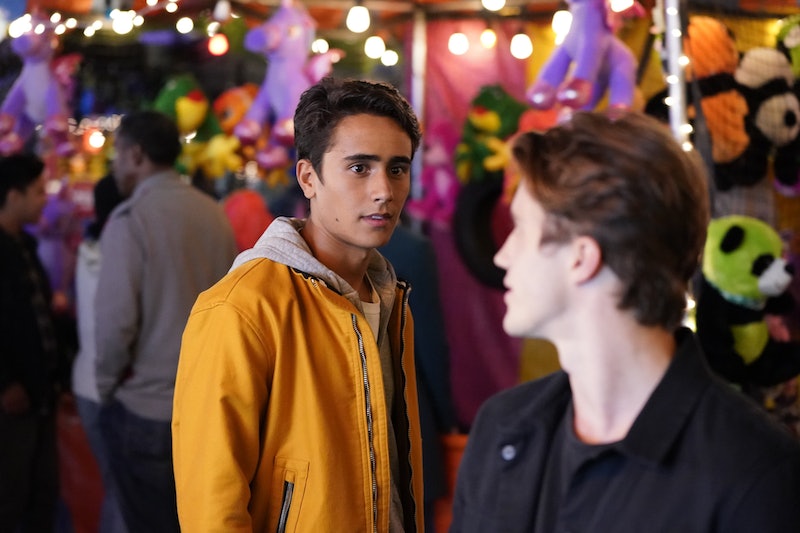 The highly anticipated TV series based on the hit gay rom-com Love, Simon is undergoing some surprising changes, including a new name and a new home. On Monday, Feb. 24, it was announced that the Love, Simon TV show will not stream on Disney+, as originally planned. Instead, the TV adaptation of the beloved film has moved to Hulu, and the reported reason behind the move has a lot of fans questioning Disney's commitment to LGBTQ+ representation.

The show, now be titled Love, Victor, takes place in the same universe as the 2018 movie, at Creekwood High School, but will feature new characters and a new lead, Victor (Michael Cimino), a teenage boy grappling with his sexuality while adjusting to life in a new home. Nick Robinson, who played the titular Simon in the film, will narrate the series.

The controversy began after Deadline reported that Love, Victor was moving platforms because it features a "realistic portrayal of issues faced by young adults that may not be appropriate for families to watch with their young kids." The article also noted that being family-friendly is "something that has become imperative for a Disney+ program."

Twitter users immediately called out Disney for reportedly insinuating that a show about a gay teenager wasn't family-friendly enough for Disney+. While there is LGBTQ representation on the platform, with shows like High School Musical: The Musical: The Series and Diary of a Future President featuring gay characters and storylines, many viewers online think it's not enough. Others called the decision hypocritical. After all, Disney+ housing shows like The Simpsons, which features crude adult humor, and films like Pirates of the Caribbean, which includes plenty of violent content.

Becky Albertalli, the author behind the original novel that inspired Love, Simon, responded to the backlash on Twitter. She clarified the reasons behind the move in a Twitter thread, saying that it had nothing to do with the character's sexuality. "For what it’s worth, it’s not based on the show featuring a gay teen love story," she explained. "Disney knew what it was when they got it. There are mature themes such as teen drinking, etc. that led to the switch."

Albertalli also asked fans to still watch the show and give Disney "the benefit of the doubt." She continued, "I hope you’ll take a chance on this beautiful show, with its brilliant, thoughtful actors, writers, and production team."

Prior to Albertalli's tweets, sources had made similar claims to Entertainment Weekly, saying that the decision to move Love, Victor to Hulu was due to the show's "depiction of alcohol use, sexual exploration, and marital issues among parents."

Love, Victor premieres on Hulu during Pride Month in June, so if you decide to watch, get your pride flags out now.