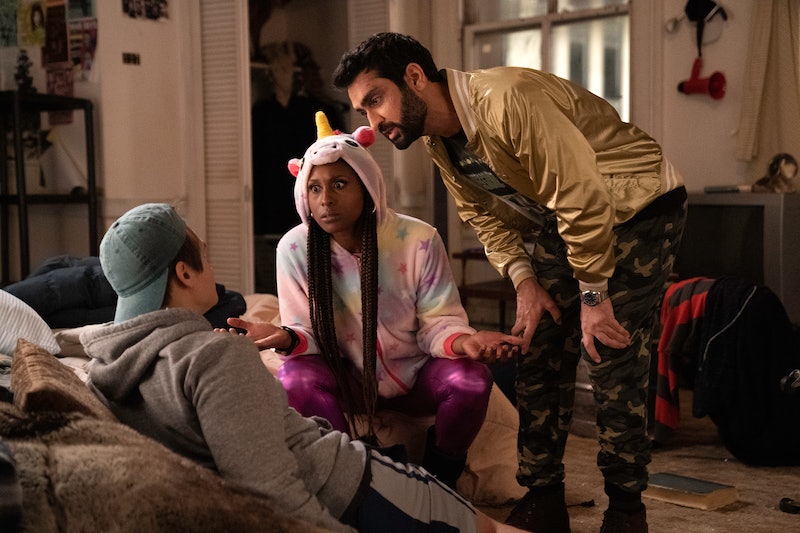 The world might be on fire, but at least fans still have rom-coms to look forward to. And The Lovebirds trailer, which dropped on Thursday, Jan. 16, is definitely a respite from the downers of 2020. The comedy starring Issa Rae and Kumail Nanjiani officially hits theaters on April 13, and follows Leilani (Rae) and Jibran (Nanjiani), as the couple unexpectedly gets caught up in a murder and they try to clear their names as killers.

The trailer begins by playing Foreigner's "I Want to Know What Love Is" and teasing, "Every happy couple has one moment that defines their relationship." Unfortunately, for Jibran and Leilani that moment is witnessing a murder — and then being blamed for it. The movie follows them as they try to clear their names and catch the criminals in the process.

As Jibran and Leilani, Nanjiani, who starred in Silicon Valley, and Rae, of Insecure, definitely look like they could be the next beloved rom-com couple. There are multiple lol-worthy moments throughout the trailer — "Did you think it was one of those 'men only' doors?" — and the pairing can only be described as an HBO comedy fan's dream.

Before Rae and Nanjiani joined the movie, the script was written for two white actors in the leading roles. So, Rae and Nanjiani worked together to make the script fit their characters better. "It’s not a story about race but we wanted to acknowledge our race and the fact that we’re an interracial couple," Rae told Entertainment Weekly in an interview published on Jan. 14. They both bonded over the movie and working side by side, so much so that the stars opened up to each other about their own past and present relationships.

It sounds like they put their hearts and souls into the project. And now here they are finally showing the world their rom-com with a murderous plot twist. If anyone could pull off this type of movie, it's Rae and Nanjiani.