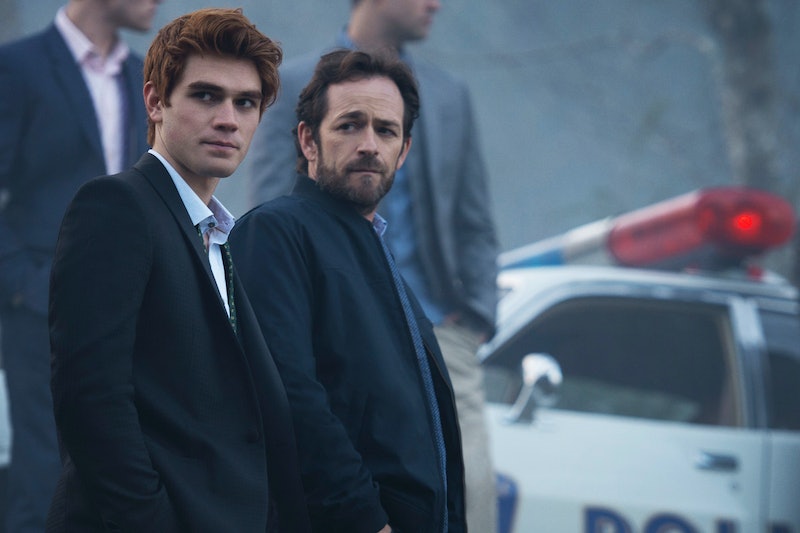 Next season, fans will get the Luke Perry Riverdale tribute episode they've been waiting for. After Riverdale Season 3 ended without addressing Perry's death, creator and showrunner Roberto Aguirre-Sacasa has already teased that the Season 4 premiere will be an "in memoriam" to Perry, who passed away on March 4 from complications following a massive stroke.

On Wednesday, June 19, Aguirre-Sacasa shared a photo of the script for the Riverdale Season 4 premiere titled "Chapter Fifty-Eight: In Memoriam," which will be the show's final goodbye to Perry and his character Fred Andrews. "Probably the most important episode of #Riverdale we’ll do this year, if not ever," Aguirre-Sacasa tweeted. "A tribute to our fallen friend. Thankful for this opportunity to honor Luke & Fred."

The episode, written by Aguirre-Sacasa and directed by Gabriel Correa, will air Wednesday, October 9, on The CW. And it will set up the new season, which will have to deal with the fallout of this very special episode for Archie and everyone else in Riverdale.

While Perry's final Riverdale appearance was in Season 3 Episode 19, the show didn't write him out completely. Instead Archie's mom, Mary (Molly Ringwald) came to town and mentioned that he was away on business to explain his absence and give the writers, who had already finished writing the Season 3 scripts, a chance to pay proper tribute to Perry. “It felt like trying to squeeze this in would have been a disservice," Aguirre-Sacasa told Variety last month.

While Aguirre-Sacasa has not yet detailed how the show plans to say goodbye to Perry or Fred Andrews, he has hinted that Ringwald could play a bigger role in Season 4. “[We’ve told her], ‘You’re welcome back anytime, as often as you want and as much as you want,'” Aguirre-Sacasa told TVLine last month. “We actually already had her scheduled to come back to Riverdale to visit Archie and Fred. When the tragedy happened, she said, ‘If you need me to stay, I’ll stay.’ And I said, 'We’d love you to stay.'" He added, "We’ve talked about Molly having a bigger presence next year to help her son.”

It's also something KJ Apa, who plays Archie, mentioned as a way to fill the void of Perry's departure in an April interview with Entertainment Tonight. "We're definitely gonna obviously have to address it at some point," Apa said of writing Perry out of the show. "[Possibly] that [means] Molly stepping in as more of an active parent for Archie, but that all depends on the availability of the actors around us. So, you know, we'll do what we can."

For Aguirre-Sacasa, the priority is making sure Perry's memory lives on within the show long after the Season 4 premiere. In a different Entertainment Tonight interview from back in March, he said, "His spirit, which was so generous and wise and vivacious, we hope will infuse every episode. So in my mind, every episode for the rest of time on Riverdale will have a bit of Luke in it."

Riverdale will officially say goodbye to Perry next season, but his memory will continue to live on.