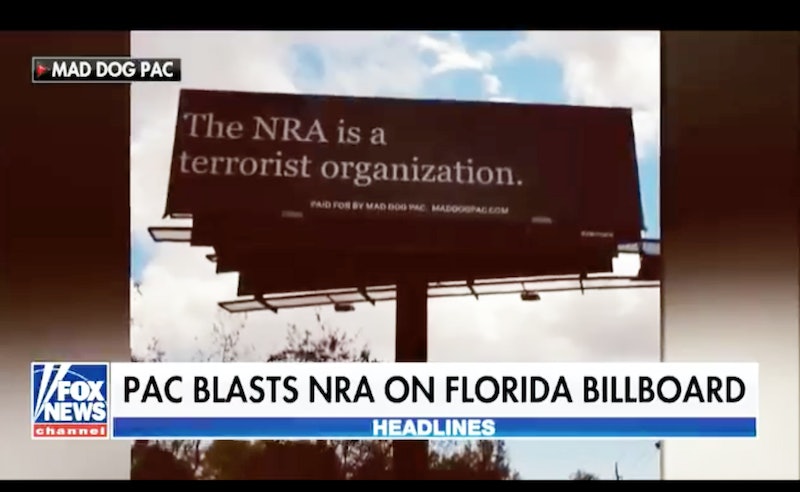 While the students who survived the school shooting in Parkland, Florida work tirelessly to organize marches and walk-outs protesting gun violence in America, another organization is joining them in the fight. A political action committee called Mad Dog PAC bought billboards attacking the NRA by calling the gun lobbying group a "terrorist organization."

Mad Dog, according to the PAC's website, "solicits contributions from concerned citizens to fund billboards against Treasonweasel House GOP candidates across the country." Some of the politicians they've recently targeted include Reps. Kevin McCarthy (R-Calif.) and Matt Gaetz (R-Fla.).

According to the Pensacola News Journal, the organization was registered as a PAC in December 2017 by Claude Taylor, a former White House staffer under Bill Clinton. Launching its billboard campaign in January, the group has also funded signs that demand President Trump be impeached, and are now orchestrating an anti-NRA campaign.

One billboard was recently erected along North W Street in Pensacola, Florida. "The NRA is a terrorist organization," the sign reads. According to Fox & Friends, Mad Dog PAC has said that two more anti-NRA signs have been ordered. The next billboard will appear in Pittsburgh, according to Taylor, and a third will be erected in another location in Pennsylvania. (Bustle has reached out to the NRA about Mad Dog's allegation that it is a "terrorist" group.)

Currently, the PAC is especially focused on calling out House Republicans before the Nov. 6, 2018 midterm elections, in order to flip the House, taking control away from the GOP. Taylor believes this would make it easier for Democrats to pass sensible gun legislation.

"With the GOP majority in the House and in the Senate, the NRA makes impossible any meaningful, common-sense gun reform," Taylor told the Pensacola News Journal. "That includes background checks and assault weapon bans."

There have been other similar anti-NRA billboard campaigns, including one by activist group Avaaz, inspired by the film Three Billboards Outside Ebbing, Missouri. On signs plastered to three trucks, the organization called out Florida Sen. Marco Rubio for his inaction following the mass shooting. "Slaughtered in school ... And still no gun control? ... How come, Marco Rubio?" the signs read.

Since Mad Dog's anti-NRA billboard went up, a lot of right-wing news sites, like Breitbart and the Blaze, have jumped on the fact that the organization funding the signs is ran by someone who used to work for the Clintons. The Blaze even referred to the new billboard's message as a "baseless claim."

More and more people, including filmmaker Michael Moore, have referred to the NRA as a "terrorist organization" in the wake of the Parkland, Florida massacre, which left 17 students and teachers dead. They feel the group has contributed to gun violence in America by lobbying politicians to keep lenient gun laws in place.

"The NRA is a terrorist organization," Moore tweeted last month. "The media should speak of the NRA in the same way they do ISIS. Total ISIS-inspired deaths in US = 79. Thanks to the NRA & the politicians they buy, we've had 1.2 MILLION American gun deaths since John Lennon was shot dead in NYC #NRAKillsKids."

In order to fund its anti-NRA billboards, Mad Dog PAC is soliciting donations via its website. People can choose which billboard campaign they'd like to fund, including "Flip the House & Senate," "Impeachment Now," and "End NRA Terrorism."

Taylor has made it clear that Mad Dog is not stopping its advocacy any time soon. They currently have contracts for "28 or 29" billboards throughout the United States, the Pensacola News Journal reported. While the organization is targeting traditionally Republican states, they're not limiting their message to any one particular part of the country.

"We have dozens of billboards up across the country with anti-NRA messages," Taylor said. "We looked at putting this one up in about a 100-mile range from Pensacola to Alabama to Mississippi. Just went with the available space."

In addition to the anti-NRA boards in Pensacola and, soon, Pittsburgh, there will also be signs going up in Oklahoma and two in Texas.

"The NRA is helping facilitate the introduction to the civilian marketplace of a broad range of military grade weaponry that is inappropriate, unsafe and unwise to have in civilian hands," said Taylor. "And legislatively, the NRA owns the GOP."