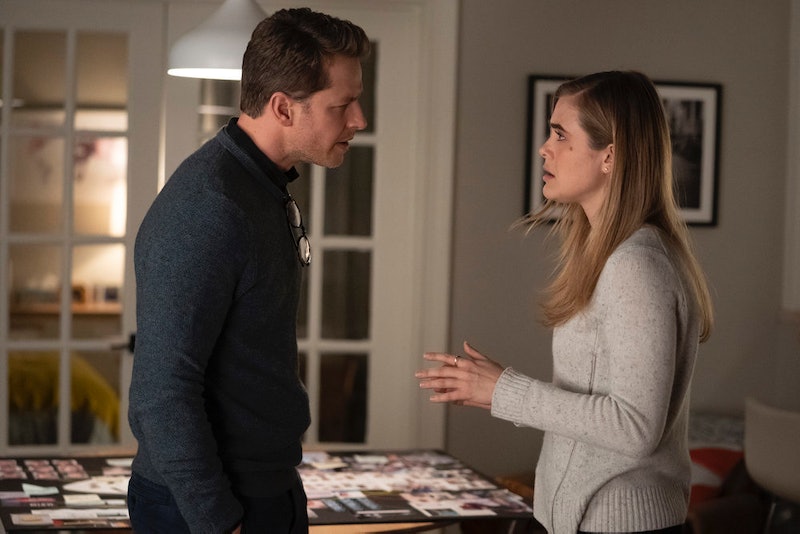 Fans have known for a while that the government isn't what it seems on Manifest. Theories abound that they're in on some sort of coverup relating to Flight 828. But now fans finally have a face for the new big bad on the government's side. The Major on Manifest is a woman played by Elizabeth Marvel, whom you may know from Person Of Interest, House Of Cards, Fargo, Law & Order, Homeland, or one of her other prestigious projects.

And just like the actor herself, Manifest creator Jeff Rake told TV Insider that the Major will be "an entertaining and formidable presence" on the show. Not much is known about the Major at this point. Her big reveal scene taught viewers that she's been running point for 22 years on whatever branch/project of the government/military she's in on. Clearly she's a powerful woman since she was also seen purchasing a home with a balcony that overlooks all of New York City. And we know that we haven't met her before... necessarily.

Reddit user ChiliPepper1112 speculated that the Major could be a Flight 828 passenger — Ben may not know them all as well as he thinks. But she would possibly have been some sort of plant on the plane to see if whatever experiment the government was running or covering up went as planned.

But the other big theory about the Major's identity is that she's a future version of a passenger we already know — namely Michaela or Fiona.

The Michaela theory posits that she's the narrator of the show, and she's narrating in the past tense. So perhaps a future version of Michaela exists and maybe it's the Major. After all, Reddit user caltordith pointed out that Michaela and the Major are wearing what seem to be the same necklace.

The Fiona theory suggests that when Captain Daly took Fiona in his stolen plane to re-create the Flight 828 path — that he took them both into the future.

Fiona always seemed a little sketchy — especially after the meteorologist was found dead after Fiona found out from Ben that he knew about the storm. Plus her research is about shared consciousness — aka what everyone from the plane is experiencing. She's tried acting innocent, but she seems shady and her story is likely far from over.

Whoever the Major is, she seems to have some nefarious plans. She's in search of some Holy Grail, which Ben believes could be Cal since he's more sensitive to the callings. And that house she bought with the balcony overlooking the city? What does she need it for anyway? Reddit user dumpslikeatruck1 suggested that she obviously can't, like, watch Ben and Michaela running around NYC from her apartment. But she can see larger impacts to the city. Perhaps there's some sort of attack coming, and she wants to see it all go down.

In any case, we'll get more answers soon. The Jan. 28 episode press release says that "after a close call with Major's henchmen, Ben finds himself facing a terrifying new threat that is growing exponentially." And from what we've seen of the mysterious Major so far, Ben could be in serious trouble.

More like this
How A Location Blunder Changed The Outcome Of 'The Capture' S2.
By Darshita Goyal
Markella Kavenagh was working in retail before 'The Rings of Power'
By Maxine Harrison
Every Celebrity From 'The Masked Singer' Season 8 Revealed Or Rumored So Far
By Gretchen Smail
'Reservation Dogs' Season 3 May Finally Mend Bear & Willie Jack’s Relationship
By Gretchen Smail
Get Even More From Bustle — Sign Up For The Newsletter