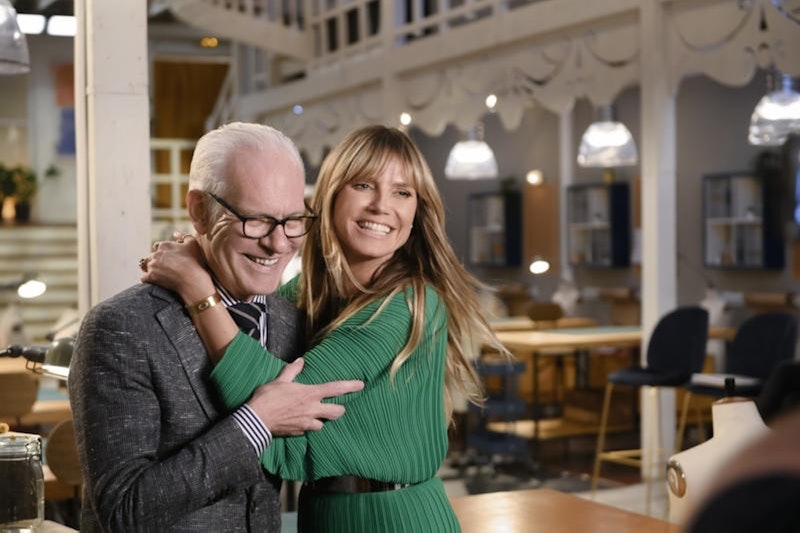 The reason for the change? "This is not about who's the best or [most] luxurious designer," Nicole Richie, who serves as a judge on the show, said at the same TCA panel. "It's about who can be a designer and turn this into a brand." That means Making the Cut's winner doesn't just need to be able to scrap together a look in two days; they need to have a clear view about who they are as a designer and how they might build that into a global business.

Get to know the 12 designers vying for that chance below.

The 38-year-old fell in love with fashion design as a kid, when she would make clothes for her dolls. Now, she runs her own clothing line called Megan Renee. Her aesthetic is feminine, '70s-esque cocktail.

Hailing from Shanghai, Joshua owns the fashion brand BABYGHOST, which has already been written about in major publications like Vogue. Having interned for both Diane Von Furstenburg and Thakoon, he learned from the best. Now, he creates ready-to-wear looks that emphasize youthfulness.

Martha's brand Neubyrne focuses on creating a fantasy, incorporating fringe, sequins, bows, and other whimsical designs. Her work has been featured in British Vogue, and she's already shown at New York Fashion Week — which is impressive, because she's a pretty new designer.

Though now living in New York, Rinat grew up in Israel and came to the United States to study design. Her fashion line is sportswear-driven and "gender-free," and she's dressed celebrities including Billy Porter, Laverne Cox, and Adam Lambert.

Ji Won Choi currently has a line with Adidas that features edgy track jackets, jumpsuits, shoes, and more. She's created pieces for Beyoncé and Kendall Jenner, among others — and she's only 26 years old.

Sander is from Belgium, and at 24, already has his own eponymous clothing brand. His designs are more avant-garde than ready-to-wear, which could be both a strength and a struggle, depending on the challenge.

Unlike many of his competitors, Will doesn't yet have his own fashion label. However, he has worked for Oscar de la Renta, 3.1 Phillip Lim, and Kith. Now's his chance to create a brand of his own.

Troy is busy running his menswear-inspired brand Hul Arnold and also teaching at the fashion school Parsons in New York City. Notably, he designed one of Sarah Jessica Parker's Glee costumes when she starred on the show.

Esther is from Berlin, Germany and runs an edgy, menswear-inspired line named after herself. The brand has been a success for 15 years, and she also has a boutique in Berlin.

Sabato's brand Sartorial Monk has been written about by the likes of Women's Wear Daily, and he's been in the fashion industry for 25 years now. He's one of the oldest designers in the competition, but that may come in handy considering all the expertise he has.

Jasmine comes from a long line of designers. Her grandmother was a seamstress and her mother is a fashion designer. Now, Jasmine is following in their footsteps with a ready-to-wear clothing line, New York Fashion Week showings, and write-ups in many fashion magazines.

See who comes out on top when Making the Cut premieres on Amazon March 27.

More like this
A 'Terminal List' Sequel & Spinoff Are Reportedly In The Works
By Kadin Burnett and Grace Wehniainen
Everything To Know About The 'Daisy Jones & The Six' TV Series
By Maxine Harrison and Brad Witter
Everything To Know About 'The Real Housewives Ultimate Girls Trip' Season 4
By Jake Viswanath
Andy Cohen Apologized To Larsa Pippen After A 'RHOM' Season 5 Reunion Dust-Up
By Brad Witter
Get Even More From Bustle — Sign Up For The Newsletter
From hair trends to relationship advice, our daily newsletter has everything you need to sound like a person who’s on TikTok, even if you aren’t.