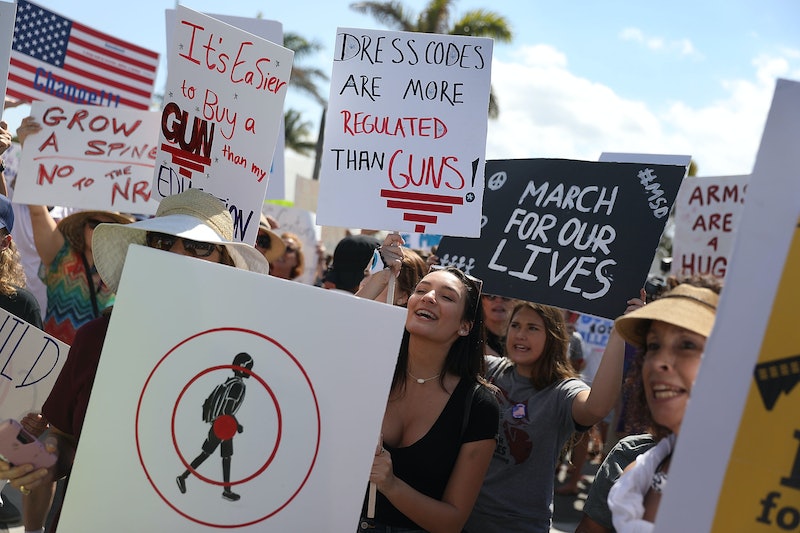 President Trump's Saturday took him as far from the March for Our Lives as possible. Not only did Trump avoid the estimated 500,000 heading to Washington, D.C., by flying south, but he also avoided those near his home in Florida, too. So local protesters brought their message to him. The March for Our Lives at Mar-a-Lago was impromptu but powerful. Some 2,000 protesters made their way to the "winter White House" to make sure the president didn't miss the gun control message being broadcast to the nation on Saturday.

Trump got out of town early on Friday afternoon, jumped on Air Force One, and landed in Palm Beach just at 7 p.m. First Lady Melania and his son Barron joined for the weekend. That brought him and the first family about 990 miles south of what was expected to be the biggest protest Washington, D.C., has ever seen.

But Trump avoided smaller sister marches in Florida, too. After leaving the Trump International Golf Club near West Palm Beach Saturday morning, his motorcade avoided a protest on the way home to Mar-a-Lago. The Palm Beach Post reported that the motorcade's usual route would take them past a smaller March for Our Lives protest in Dreher Park in West Palm Beach, Florida, that had about 1,000 people in attendance. They stood ready for Trump to pass, but he went another route.

That led the protesters with just one option: Go to him. BuzzFeed News' Rosalind Adams reported on Twitter that the protesters in Palm Beach decided to walk to Mar-a-Lago. They headed as close as they could marching, ultimately making it just across the bridge from the Trump property. Along the way, the protesters chanted, "How many more? Not one more!"

There were also counter protesters who showed up, carrying Trump campaign flags, BuzzFeed News reported. But they were outnumbered by the protesters carrying intelligent signs and honoring the 17 dead from Parkland, just 40 miles south of West Palm Beach.

Trump has not commented on the March for Our Lives, but his deputy press secretary did. White House Deputy Press Secretary Lindsay Walters issued a statement on Saturday while Trump was golfing. She highlighted what he has done, but did not address the demands of the protesters.

"We applaud the many courageous young Americans exercising their First Amendment rights today," Walters wrote. "Keeping our children safe is a top priority of the President's, which is why he urged Congress to pass the Fix NICS and STOP School Violence Acts, and signed them into law. Additionally, on Friday, the Department of Justice issued the rule to ban bump stocks following through on the President's commitment to ban devices that turn legal weapons into illegal machine guns."

The Palm Beach Post asked the Secret Service if there was a reason for the route change that kept the president from witnessing the Dreher Park protest. They did not comment "on matters of security." The Trump motorcade has changed routes during prior protests.

Other attempts to reach the president included leaving signs from the D.C. march outside the White House and the Trump International Hotel down the street.

Trump may not have witnessed the March for Our Lives in person, but when he tunes into cable news Monday morning, the event is sure to be covered. The main argument on Fox News may be just how many were in attendance. The organizers estimated 800,000, but the police have not released an official estimate.