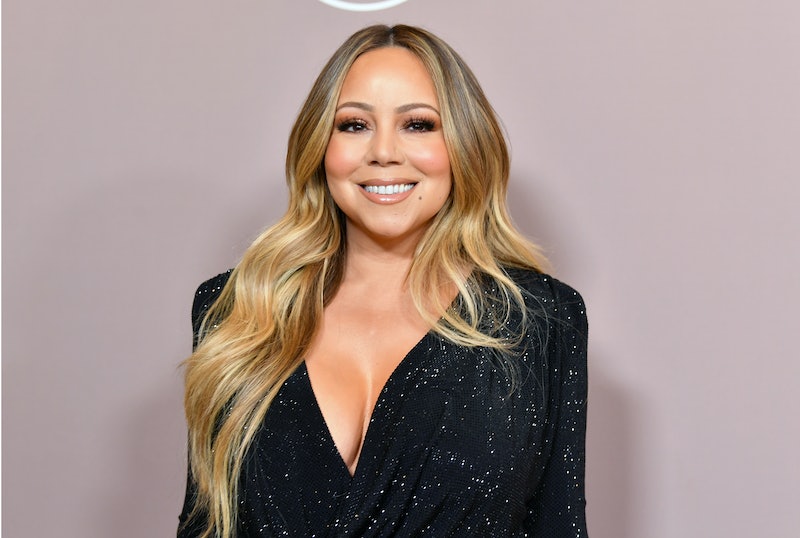 It's been 25 years since Mariah Carey released her iconic holiday single "All I Want For Christmas Is You," and yet it stills remains one of the most beloved songs of the season — so much so that it's now getting its very own documentary. The trailer for Amazon's Mariah Carey Is Christmas! mini-doc offers a behind-the-scenes look at how the holiday hit was created and details the cultural impact its had on the world ever since. The project, which has yet to receive an official release date, will also feature commentary from Carey's longtime collaborator, Randy Jackson, Variety's music editor, Shirley Halperin, Billboard's Senior Director of Charts, Gary Trust, as well as the singer's longtime backup singer and friend, Trey Lorenz.

"To come up with an original holiday song that becomes a hit, next to impossible," Jackson is shown saying in the teaser, as video footage and photos of Carey from back then play out on the screen. Performing covers of Christmas songs was very common back then, much like it is today. However, Carey wanted to create a classic hit of her own that encapsulated everything she loves about the holiday season.

"I just remember where I was coming from, wanting it to feel like a classic," the singer herself explains in the trailer. "It was an accomplishment for me that I was really proud of." And rightfully so.

At this point, Christmas and Mariah Carey pretty much go hand-in-hand. It's almost impossible to disassociate the two — especially after "All I Want For Christmas Is You" was featured in Love Actually back in 2003. In fact, this November, the Guinness World Records organization honored Carey with three holiday-themed world records thanks to the hit single, naming it the best-charting holiday single by a solo artist, the most streamed track on Spotify in 24 hours, and the Christmas song with the most weeks in the UK singles Top 10 chart.

This Amazon doc won't be the only time Carey has opened up about the origins of her holiday hit, though. She recently spoke about writing the hit to Cosmopolitan UK, revealing that she put on It's A Wonderful Life and decorated her Christmas tree to get in the spirit before writing. The very next day, she said, she sat down in front of her keyboard and began composing "little melodies and stuff." She added: "I was going over all the things I think about at Christmas time that make me happy and how to turn it around and make it into a love song."

It pretty much goes without saying at this point, but mission accomplished.

More like this
Netflix Reveals First Look At Wednesday In The 'Addams Family' Spinoff Series
By Bustle Editors
Kenan & Kel Just Reunited At The 2022 Emmys & Twitter Is Overjoyed
By Grace Wehniainen
25 Years Later, Mariah Carey Re-Releases 'Butterfly' With 8 New Songs
By Jake Viswanath
20 Years Later, Kelly Clarkson & 'American Idol' Judges Reunite For Her Hollywood Walk Of Fame Star
By Radhika Menon
Get Even More From Bustle — Sign Up For The Newsletter