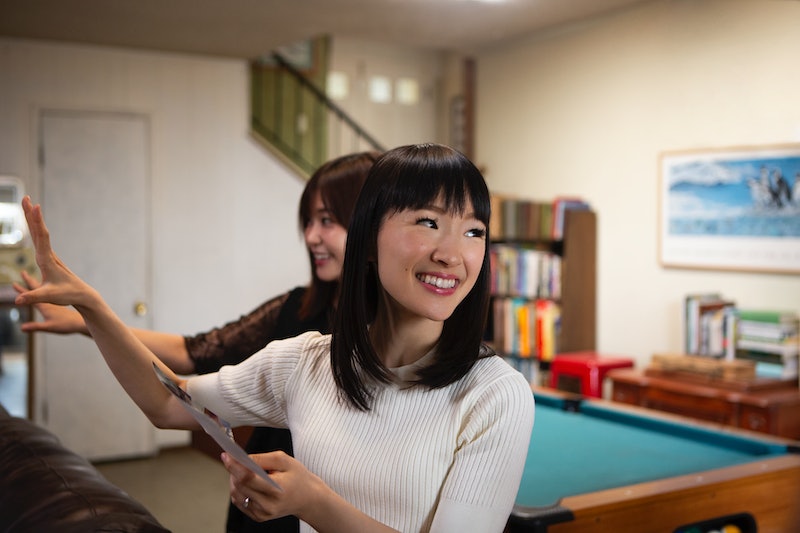 Marie Kondo has been a pop culture phenomenon since her first book, The Life-Changing Magic of Tidying Up, was released in the U.S. in 2014. The book, which details "The Japanese Art of Decluttering and Organizing" birthed The KonMari Method or "Kondo-ing" — the process of decluttering one's belongings by touching each item and determining whether it sparks joy. But Kondo's popularity has skyrocketed since the release of the Netflix series, Tidying Up With Marie Kondo. With that popularity spike has come some unexpected controversy — all to do with books. And according to many on social media, including Ellen Oh, author and co-founder of We Need Diverse Books, to whom Bustle reached out for further comment, there is a distinct racist and classist element to the backlash.

Oh — who is Korean, but who lived in Japan as a child and whose first language was Japanese — tells Bustle, "Ever since I saw the backlash against Marie Kondo come out, I've been really bothered by what I thought of as deliberate misinterpretations. At first I was attributing it to the difference in cultures, especially the lack of nuance toward how things can be translated. Asian languages are so different from English. Sometimes things don't translate well." But it wasn't long before Oh came to believe that "people are deliberately misunderstanding [Kondo.]"

"Ever since I saw the backlash against Marie Kondo come out, I've been really bothered by what I thought of as deliberate misinterpretations."

Here's how it all started: In episode 5 of Tidying Up, Kondo helps a young couple declutter their books. On the show and in The Life-Changing Magic, Kondo speaks extensively about using KonMari on the home library. An article in Deseret News reiterates Kondo's points: she believes that if you have a lot of unread books or books you hang onto in the belief you will reread them one day, you should get rid of them. Kondo also suggests that if only parts of a book spark joy, readers might consider tearing out those pages.

Novelist Anakana Schofield was one of the first to rail against Kondo's book purging methods on social media: "Do NOT listen to Marie Kondo or Konmari in relation to books," she wrote on Twitter.

Other users soon followed, including author Jennifer Wright who, in a now-deleted tweet, wrote "This woman is a monster" in response to an image that showed Kondo with a speech-bubble that read, "Ideally, keep less than 30 books." Opinion pieces popped up, too, including an article by book critic Ron Charles in The Washington Post entitled, "Keep your tidy, spark-joy hands off my book piles, Marie Kondo."

But that "ideal" number of 30? It comes from Kondo's use of the KonMari method in her own home: She writes in The Life-Changing Magic that she keeps her collection to 30 books, though she doesn't offer it as a specific number for your home. Importantly, Kondo also never actually said we have to get rid of all of our books. In an interview with Refinery29, Cait Munro asked Kondo about those who claim to find joy in their "clutter" or, in the case of readers, shelves stacked to bursting with books. Kondo said:

"I think if you're truly comfortable with clutter in your home, then that's fine. There's nothing wrong with that, but I will recommend that you still have a designated spot for each item, and also to understand how much quantity of each category of things you have and need. I think that's an important awareness to have."

Oh cites an article in The Guardian by Anakana Schofield, written after Schofield's viral KonMari tweet, as one example of "a willful misunderstanding of Kondo's statements here to suit her own narrative." Oh says, "There is an overemphasis on the words 'spark joy' without understanding what [Kondo] really means by it. Tokimeki doesn't actually mean joy. It means throb, excitement, palpitation. Just this basic understanding annihilates Schofield's argument that books should not only spark joy but challenge and perturb us. Tokimeki would imply that if a book that challenges and perturbs us also gives us a positive reaction, then why wouldn't you keep it?"

Oh also mentions Wright's now-deleted tweet in which she called Kondo "a monster," saying, "The deliberate misunderstanding starts with forgetting that the advice is geared to people looking to declutter their life in the first place. If that doesn't apply to you, then don't listen."

"The backlash has focused on everything from [Kondo's] poor English to making fun of the terms she [uses]," Oh says. "We have seen so many memes making fun of the concept of 'sparking joy' and it reminds me in many ways of people deliberately misunderstanding and making fun of my parents' broken English."

There is also, Oh says, a certain amount of privilege that has come into play in the book-tidying discussion.

"Classism, elitism, the privilege of having a big house with a lot of storage? I don't know what the rationale is for the backlash but I do know that it comes from a place of privilege," Oh says. "Elitism in that if you don't have lots of books you can't possibly be very smart. And financial classism because I remember being young and poor and owning less than ten books. It was why the library was my sanctuary."

And Oh is far from the only person who has spoken out about all of the above. Twitter user Jonah Ven shared their thoughts about the general ignorance over the true purpose of KonMari in a tweet thread, writing: "Memes and criticisms of it are lowkey inherently racist due to ignorance of Asian, specifically Japanese culture and influences."

Others on social media have also responded to what they believe are racist aspects of the backlash, including author Kat Cho, who wrote in a tweet: "Please don't call POC monsters. Please don't use language that dehumanizes an already marginalized community." And writer Celeste Pewter, who tweeted: "What do you gain by mocking an Asian woman for the wrong reasons? Would you double down if it was Martha Stewart and not Marie Kondo? Doubt it."

Yes, getting rid of books can be an emotional experience for some, and tearing out pages from books would also prevent them from being donated to libraries, schools, non-profits and other spaces that could really use them. But in the end, it seems that the backlash against Kondo's advice has much less to do with her, and far more to do with misguided anger over what some readers perceive as Kondo's slight against the book ownership they deem necessary to their literary identity.

Many book lovers are also rallying behind Kondo, including Twitter user Alexandra Duncan, who writes in a tweet: "I know this may come as a shock, but as a librarian, I 100% support KonMari-ing your bookshelves."

Perhaps the new year is not just the perfect time for tidying up our physical spaces, but our mental ones as well. Ask yourself, fellow reader, is it the over-stuffed library that truly sparks joy, or the stories themselves?