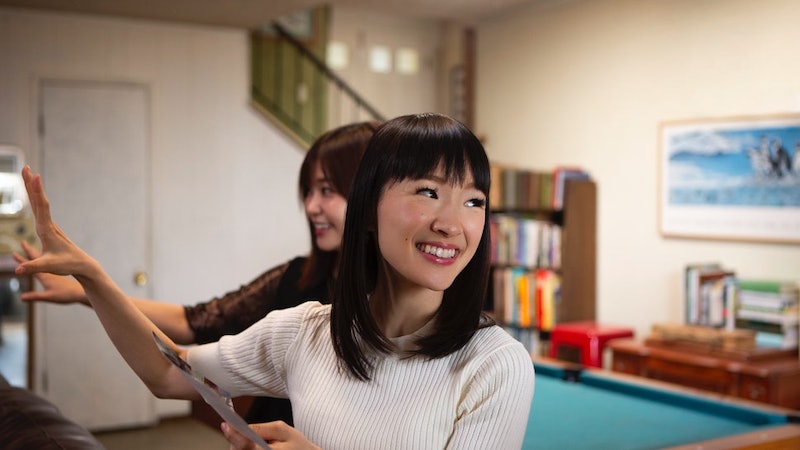 If you’ve given decluttering expert Marie Kondo’s KonMari method of organizing a try, chances are you lugged several boxes or bags of whatever didn’t “spark joy” for you out of your home. That was me last fall; I took two carloads to my local Goodwill after a massive decluttering session, and I put a few things out on the curb that were too old or damaged to donate. And, like most people, once I dropped off my donations, I felt fairly satisfied that I’d sent the results of my decluttering somewhere they’d be put to good use. But the one thing we forget when we're KonMari'ing — or whatever method of decluttering you’re using — is that it’s super important to be mindful about where your stuff actually goes after you declutter.

Decluttering is having a moment right now, and that’s not necessarily a bad thing. But personal organizer Dany D’Andrea told MindBodyGreen that it’s important to remember that the items you accumulate have an entire life cycle that don’t end when they leave your house.

"When getting rid of things, most people are trying to move them out as quickly as possible," D'Andrea told MindBodyGreen. "I want people to be aware that, while it's great to declutter our spaces, we have a responsibility to do so in an environmentally conscious way."

After Tidying Up With Marie Kondo premiered on Netflix in January 2019, some U.S. charity shops temporarily stopped taking donations after people flooded them with donations as a direct result of watching the show, The Telegraph reported. Several Goodwill donation centers in northern California closed in early February “due to the overwhelming number of donations,” the Telegraph wrote. That can be a great thing for charities, which rely on donations to make money, according to The Guardian. But when it comes to clothing, says The Guardian, much of what people donate can’t actually be resold.

Most clothing purchases are only worn up to seven times, according to The Guardian, but because that clothing isn’t made at the highest quality, those articles of clothing aren’t always fit for donation by the time a person has KonMari’d them. “If people are buying more at lower quality — so after a wash, the hems are gone or the garment is out of shape — that’s really difficult for charities,” Leigh McAlea, head of communications for Traid, a charity that works to stem the flow of old clothes to landfill, told The Guardian.

The clothing that can’t be resold gets sold to wholesalers who then determine what can be sold overseas; what can be downcycled into things like mattress stuffing or rags; what can be incinerated; and what can’t be used and will ultimately end up in landfills, The Guardian reports. But you’re not responsible for the fact that the clothing you buy is made at such a low quality, right? Well, no, but you can be more mindful of where you take it when you’re done using it.

D’Andrea told MindBodyGreen that waste protocols vary by city and state, so it’s up to you to do your research to find out the places to donate or recycle your clutter. D’Andrea says one nearly universal tip is that old towels and blankets probably won’t get accepted at charity shops, but you can try your local animal shelter. In New York, a major movement called #WearNext headed by British charity the Ellen MacArthur Foundation aims to develop a searchable map of all the clothing resale and recycle locations to reduce the amount of textiles in landfills, Fashionista reported. Komono, or miscellany like old batteries or printer cartridges, should be recycled appropriately, too.

There's absolutely nothing wrong with decluttering your space. Decluttering can reduce your anxiety and just overall make you feel good. But it's also important to try to be mindful of where all that clutter goes once it leaves your now clutter-free space.

More like this
The Cabincore Home Decor Trend, Explained
By Jessica Goodman
The Guide To “Witches Stairs” & Why They’re Actually Great For Small Spaces
By Emma Garza
What Is Maximalist Home Decor? The Colorful Aesthetic, Explained
By Emma Garza
Sami Miró Is Bringing Black Representation To Sustainability
By Dominique Norman
Get Even More From Bustle — Sign Up For The Newsletter