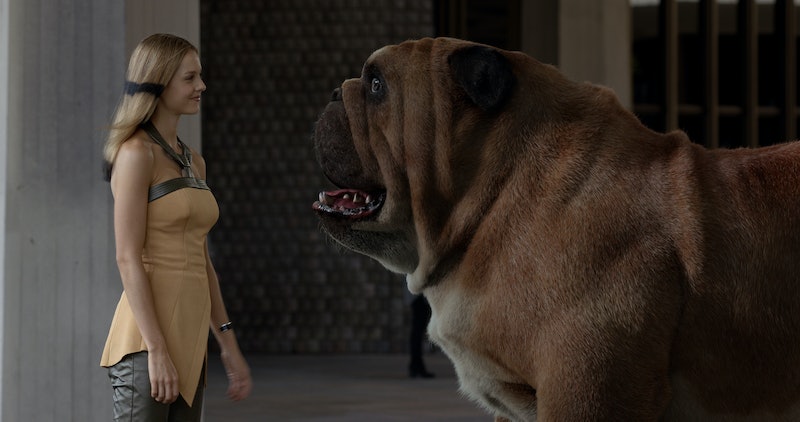 Inhumans is finally coming to ABC, though the not-quite-alien and not-quite-mutant characters have been in comics for a while. Agents of S.H.I.E.L.D. fans are familiar with one version of these experimental supers, and Marvel fans know even more about their origin. The Marvel comics history of Inhumans will not only remind you a little of Game of Thrones, but they're connected to some characters that may surprise you.

The ABC series focuses on the Inhuman royal family, also known as the House of Agon in the comics. They live in a hidden city called Attilan, which moves around but is most famously located on the Moon. Sure, the Inhumans built Atlantis, helped mankind survive the Bubonic Plague, and kickstarted the Industrial Revolution but speed forward to the present day and there is conflict galore. The Inhumans are lead by Black Bolt and Medusa, a King and Queen who are both married to each other and second cousins. There's also Black Bolt's jealous younger brother Maximus, Medusa's sister Crystal, and cousins Triton, Gorgon, and Karnack.

Their race began as a Kree experiment during a war with the Skrulls, and as a result of that genetics is a core part of Inhuman society. All of these children were raised and educated together. All except Karnak were exposed to the Terrigen mists as a child, which Agents of S.H.I.E.L.D. fans remember cause Inhumans to gain their powers. All except Maximus received supernatural abilities. Drama just builds from there.

Black Bolt became King after he and his cousins led a revolt and defeated a ruler known only as the Unspoken, whose reign was fine until he stole a weapon that could be used to turn humans into subservient beings known as Alpha Primitives. One might even call him.... a Mad King. Later, Black Bolt's brother Maximus staged a coup — as you'll see in the ABC series. Most of the comics focus on that and conflict between those two brothers and their various regal cousins as they clash with other Marvel characters.

In Marvel comics, Inhumans were technically first introduced in an issue of The Fantastic Four. Isn't that interesting? That franchise, despite multiple attempts at a film adaptation, is not currently part of the MCU. The rights to those characters is owned by 20th Century Fox. But that's where Crystal, Black Bolt, Medusa, Triton, Crystal's big puppy Lockjaw, and the whole House of Agon first appeared — as antagonists to a different family of supers.

The first Inhumans stand-alone comic series was published in 1975 and the were billed as "the most uncanny heroes of all" — likely in reference to the long-running Uncanny X-Men series that began in the 1960s, and returned more steadily in the late '90s and early '00s. Over the years, these characters have also popped up in issues of Thor, New Avengers, and Son of M — a 2006 comic about Quicksilver.

Here's a fun fact: The current Captain Marvel in the comics, Kamala Khan, is an Inhuman. This classification becomes about as commonplace in the Marvel universe as mutants, after a bomb spreads Terrigen Mist everywhere and starts transforming humans into Inhumans all over the planet. Since X-Men are also still technically not part of the MCU, Inhumans have been introduced early on through S.H.I.E.L.D. and now this series.

That said, it's that core group of royals (royals) that will make up Inhumans on ABC. Agents of S.H.I.E.L.D. has already presented their own version of Inhuman history by way of Daisy Johnson's origin story, the hidden city of Afterlife, and some fish pills that spread terrigen to human being who were low on Omega-3. The new series will likely present their own version of this royal family's history — but it's cool that they have years and years of Marvel comics to draw from already.