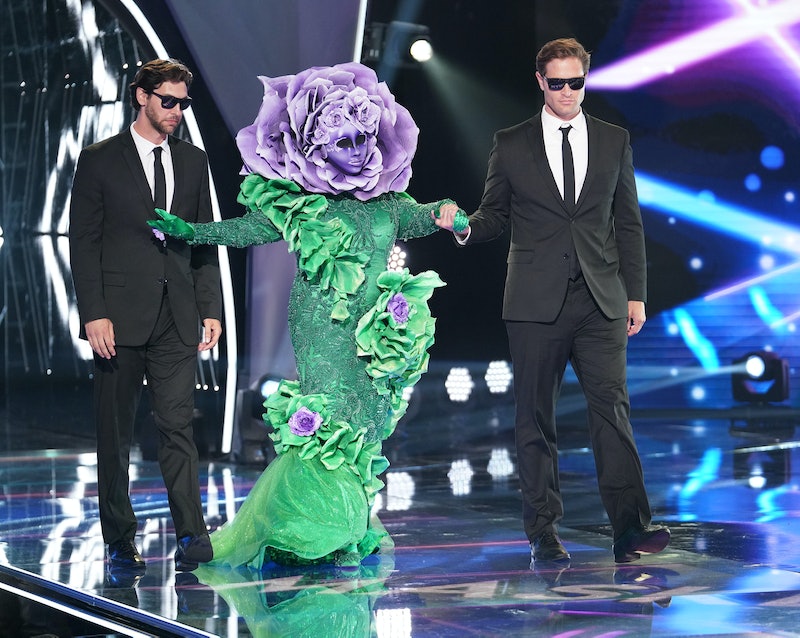 The Masked Singer Season 2 has already unmasked figure skating icon Johnny Weir, pro video gamer/YouTuber Tyler "Ninja" Blevins, and boxing legend Laila Ali, but there are still plenty of guesses to be made about the remaining contestants. For example, there are already a number of theories about Flower heading into The Masked Singer's Oct. 9 episode. Yes, even though we've yet to see this particular contestant perform.

So far, the only hints about who the Flower could be came from the clue package Masked Singer revealed ahead of the season. It was mostly filled with flower puns ( ie. "I blossom in every field I plant myself in, and I'm here to branch out yet again" and "I'm going to put my petals to the metal), but some viewers suspect there may have been more information buried in the video than it seems. In addition to the word-based clues, one shot of the Flower shows her gesturing in front of a wall of flowers that spell out the number "314." It's not a whole lot to go off of, but nonetheless, fans have put together some convincing theories for who might be hiding beneath all those petals. Here are the best guesses so far.

One of the most popular theories is that the Flower is Mayim Bialik. The actress recently completed an eight-season stint on The Big Bang Theory as Dr. Amy Farrah Fowler, who lives in apartment 314 and has a last name that sounds suspiciously close to the word "Flower." There's also the fact that Bialik starred on the sitcom Blossom, which ran from 1991 to 1995, as a teen. The only catch? That all seems so obvious, Bialik could be a red herring.

One hint that has lodged itself into the minds of Masked Singer viewers is the Flower's insistence that she's going to put the "petal to the metal." Someone who has to put the pedal to the metal pretty frequently is professional race car driver Danica Patrick. However, there's not much other evidence to support this theory — other than the fact that Patrick has already turned up in much stranger projects than The Masked Singer, such as Sonic the Hedgehog game Sonic and All-Stars Racing Transformed.

Because The Masked Singer captioned an Instagram photo of the Flower "she's beauty and she's grace" — lyrics to the Miss United States theme song — some fans have guessed Vanessa Williams, who won Miss America in 1984.

Someone from St. Louis

This is a pretty broad guess, but the fact that 314 is the area code for St. Louis could be significant. Famous former St. Louis residents include The Office's Jenna Fischer, Gossip Girl's Taylor Momsen, and The Unbreakable Kimmy Schmidt's Ellie Kemper, among others.

Of course, Wednesday night's episode could drop a bombshell that disproves all of these theories entirely, but on a show as wild as The Masked Singer, sometimes being wrong is just as fun as being right.