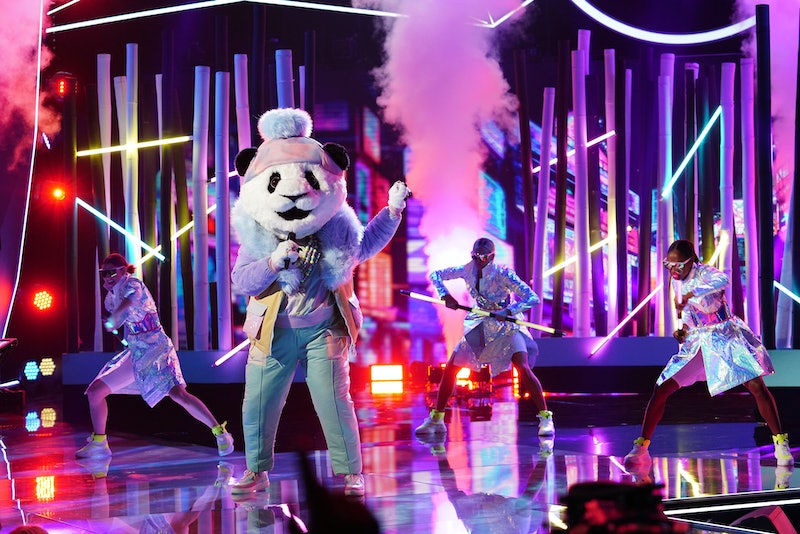 On Wednesday, Oct. 2, the second episode of The Masked Singer welcomed four new masked celebrities to the stage. After a round of knock out performances, the Panda was sent home, and — spoiler alert — revealed to be undefeated boxer, Laila Ali. After the reveal, fans wanted to know why Laila Ali chose the Panda on The Masked Singer. And, in a series of post-show interviews, Ali revealed that she didn't choose her costume for its furry cuteness.

In an interview with The Wrap published right after the reveal was aired, Ali spoke about her costume choice. "I chose the Panda because I wanted to be totally anonymous in terms of my body shape and size," she said. "So I didn’t want to wear a bodysuit or anything, because I thought just my physique alone would be a dead giveaway. There’s not that many people that are my height [5’10”] and my size or physically built like me, with a deep voice." It's not often that celebrities choose to look bigger than they are on national television, but Ali made it a priority.

In fact, the bigger suit was something she specifically asked for, though she did have some requests on how to make the body of her costume bigger in all the right places. "I told them to make sure the Panda had a nice booty. I was like, ‘Don’t just give me a fat suit just stuffed in the back looking like a pancake back there," she said. "Like shape the booty, give me some curves so that when Panda turns around you’ll see that booty!'"

Ali admitted that, while she may have been drawn to the Panda costume for the anonymity, she also chose it because she likes the animal. “And then I like the Panda because I think of pandas as strong and fierce but also kind and sweet. At least that’s how I was gonna come off, anyway,” Ali told The Wrap. "So I wanted to come out and just be really humble on the stage and really shy and I thought I could throw everybody off because I don’t present myself that way, as a shy person or timid."

The costume also helped Ali overcome her stage fright, as she confessed in an interview with TV Guide. "It was fun, being that singing is not something I do and I'm shy about. When I do sing, I'm shy," she admitted. "So to be able to sing with a panda outfit on, no one knowing who you are, it definitely gave [me] the freedom to let go."

In the Panda's clues package that aired during the episode, Ali dedicated her costume in part to her father, Muhammad Ali, saying, "Dear Papa Bear, I've always admired your humble strength, so I chose to become the Panda because they remind me of you." Admittedly, this clue could have been less about the significance of the panda and more about hinting at Ali's famous father.

As Ali has made clear, Masked Singer costumes don't always have a direct connection to the celebrity underneath. And that's going to be important when the guesses really get going.