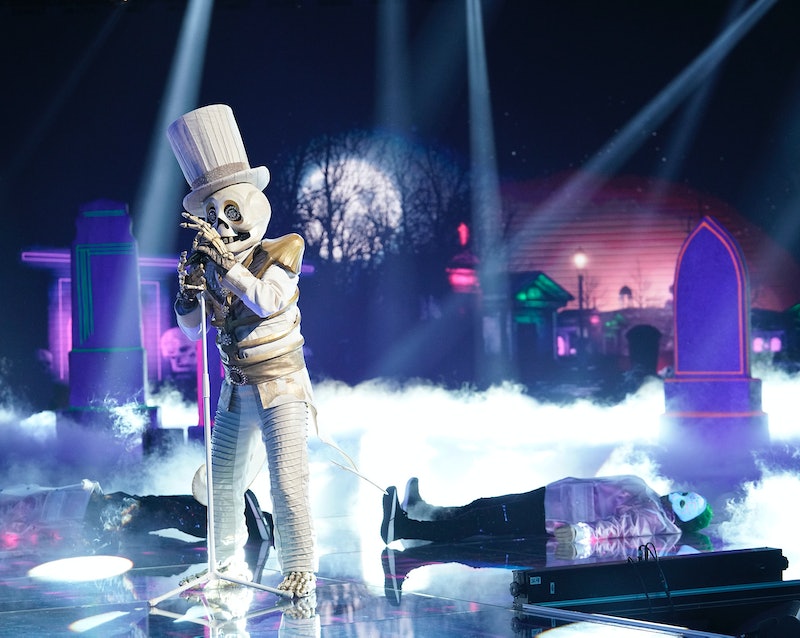 Masked Singer panelist Ken Jeong is fully convinced that the Skeleton is Martin Short, but fans have a few other theories based on the clues so far. In the Skeleton's introductory clue package, the performer teased that they're "tired of always playing second fiddle," which suggests they're an actor known for playing some kind of sidekick, or part of a famous duo like magicians Penn & Teller. The celeb also said the night they performed was going to be "a wild and crazy party," which could be a reference to the Festrunk Brothers on Saturday Night Live, played by Steve Martin and Dan Akroyd. However, the Skeleton later added "party on dudes," which is a Bill & Ted catchphrase. So basically, the clues are pointing in a lot of different directions.

Jenny McCarthy thought the Skeleton had Broadway experience and first suggested Jason Alexander, who sang on Broadway before and after finding Seinfeld fame. But after hearing the Skeleton sing, McCarthy reconsidered and guessed Jon Cryer or Nathan Lane. The latter, Lane, has a lovely singing voice, but a pretty recognizable one. You'd probably know if Pumbaaa from The Lion King was behind the Skeleton mask. Jeong's theory, correct or not, is at least in the right ballpark. Let's evaluate the evidence.

As evidenced in the above video, Short truly does love to sing. He also has Broadway experience, which fits McCarthy's suspicions. When the Skeleton answered Nick Cannon's post-performance question about "what made him the Skeleton," the cadence of his speaking voice did sound a lot like Short... but that may have been a red herring.

The "party on" clue could also refer to Wayne's World, in which Dana Carvey played second fiddle to Mike Myers as Garth Algar. Carvey has a strong singing voice, and as a Saturday Night Live veteran totally fits the Skeleton's profile. He's also a skilled impressionist who could have easily used Short's vocal inflection to throw everyone off his scent.

Akroyd was not only one of the Festrunk brothers on SNL, he's one of the Blues Brothers alongside Jim Belushi. If anyone knows about playing second fiddle to more famous performers like Martin and Belushi, it's Akroyd. The Skeleton also mentioned that he chose the costume because he doesn't fear death — and Akroyd co-created Ghostbusters, which features a group who famously "ain't afraid of no ghosts."

Another solid theory is Paul Shaffer, former Late Night/Late Show sidekick and bandleader to David Letterman. Lots of fans on Twitter think Skeleton is Shaffer, and have been comparing videos of his singing voice to the Skeleton's performance. While he's mostly known for his work as a music director, Shaffer is a performer himself and the voice of Hermes in Disney's Hercules.

Even if Jeong's insistence that the Skeleton is Short turns out to be incorrect, he's definitely on the right track. Akroyd, Carvey, and Shaffer have all worked with Short and could easily have pulled off a last-minute impression of the actor in order to fuel Jeong's theory. Still, since Jeong is so sure of his guess, it's really going to be fun when the Skeleton is unmasked — especially if fans are right and he's been totally fooled.

More like this
Erika Jayne's Estranged Husband Tom Girardi Has Been Indicted On Fraud Charges
By Jake Viswanath
'RHOSLC’s Heather & Whitney Are Still On A “Friendship Break” After Season 3 Reunion
By Jake Viswanath
RHOP’s Robyn Dixon Explained Why Juan Paid For Another Woman's Hotel Room
By Brad Witter
Vanessa Bauer Is Reportedly Dating Her 'Dancing On Ice' Partner
By Darshita Goyal
Get Even More From Bustle — Sign Up For The Newsletter
From hair trends to relationship advice, our daily newsletter has everything you need to sound like a person who’s on TikTok, even if you aren’t.