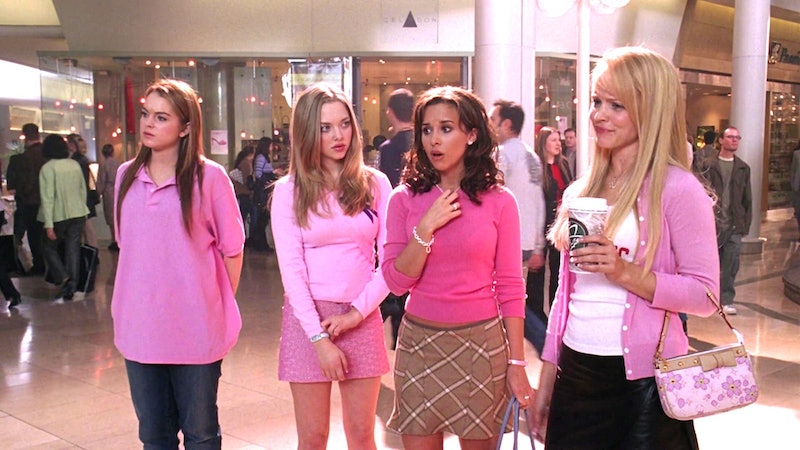 What day is it? It’s Oct. 3, otherwise known as Mean Girls Day. And luckily for fans, some of the stars from the pop culture-defining film are coming together to mark this momentous holiday — but not with your typical nostalgic reunion. On Thursday, the Mean Girls cast reunited to celebrate Oct. 3 and raise awareness for an important cause.

Jonathan Bennett, who played Aaron Samuels, the heartthrob that asked what day it was in the film (and whose hair looks sexy pushed back), announced in a video posted on Instagram that he and other cast members were teaming up with the Thirst Project to raise money for a special project. And, as they're also celebrating Mean Girls Day, they're using the hashtag #MeanGirlsDoGood to raise awareness.

Lindsay Lohan (Cady Heron), Amanda Seyfried (Karen Smith), Lacey Chabert (Gretchen Wieners), Lizzy Caplan (Janis Ian), Daniel Franzese (Damien Leigh), Rajiv Surendra (the legendary Kevin Gnapoor), and Stefanie Drummond (Bethany Byrd) were all included in the reunion video. They urged fans to donate $3 (in honor of Oct. 3, of course) to fund a freshwater well in Uganda. “So we all know Cady is from Africa, and this year, we want to help build a well in Uganda,” Lohan noted in the video, which, of course, ends with Bennett asking everyone what day it is, to which the cast joyously responds, "It's October 3rd!"

“We've teamed up with @thirstproject to help build clean water projects,” Bennett captioned the video on Instagram. “In honor of #october3rd we are asking all the MG fans to donate just $3 to help build a well that will bring safe drinking water to an entire village." He concluded with a personal message to fans, writing, "Thank you to all of our fans for your continued support. You are all SO fetch. Happy #October3rd!" Lohan also shared the video on her Instagram, tagging her fellow cast mates and writing, "We’ve teamed up with @thirstproject to build clean water projects."

This isn't the first time that the cast has reunited. Most notably, Lohan, Seyfried, and Chabert reunited with Regina George herself, Rachel McAdams, and Tina Fey — who wrote the script and starred as Ms. Norbury — for a 2014 interview with Entertainment Weekly to celebrate the film's 10th anniversary. And more recently, Bennett hosted the after show for the premiere of Lohan's MTV reality show Lindsay Lohan's Beach Club, during which the twosome reunited onscreen.

And if Lohan's wishes come true, the cast will reunite once again for a real sequel. "If anyone has asked for this more than I have, please tell me," the actor told Variety in January of 2019. She continued, stressing just how much she wants to see a Mean Girls sequel. "I've said it so many times, and so many people have asked me, and I think we'd have so much fun doing it. Tina [Fey] and Lorne [Michaels] are so amazing, and to bring everyone back together would be great." She even revealed that she'd gone so far as to campaign directly to Lorne Michaels himself. "Last time I was in New York, I went up to Lorne, and I was like, 'Please!,'" she said. "It's in their hands."

More like this
All The Sneaky Lindsay Lohan Movie Easter Eggs In Her New Ad, Explained
By Stephanie Topacio Long
The 'Hocus Pocus' Sequel Finally Has A Release Date & It Makes Total Sense
By Shannon Barbour and Radhika Menon
Alicia Silverstone Has Recreated An Iconic 'Clueless' Scene
By Frances Stewart
Kimberly J. Brown & Daniel Kountz Looked Back On Their ‘Halloweentown’ Romance
By Stephanie Topacio Long
Get Even More From Bustle — Sign Up For The Newsletter