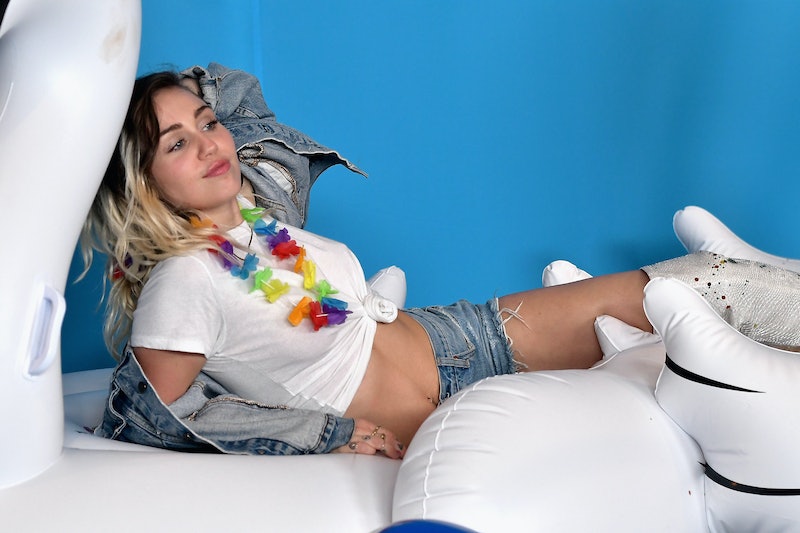 As soon as she released a 15 second teaser of the track on social media last week, fans wanted to know what Miley Cyrus’ song "She’s Not Him" is really about. Many even went ahead to speculate the song speaks to how she was still hung up on her then-ex/now-fiance Liam Hemsworth while in a relationship with model Stella Maxwell.

“There's no other girl that looks like you, darling,” Miley croons on the track. “Those eyes, that tongue, those teeth, that face, that body / Even though we've gone to outer space / Still no way you can take his place/No matter what you say/No matter what you do/I just can't fall in love with you/You're not him/Yeah, she's not him.”

While Miley hasn’t confirmed the identities of the people she’s singing about, the lyrics to "She's Not Him" make it clear that the song is indeed about dating a woman while still pining for a male ex. And this level of visibility for the bisexual community is very important.

When I was coming of age as a baby bi, there were very few positive representations of bisexual people in the media. Actually, there were very few representations of bisexual people in the media, period. Because I didn’t have any role models who made bisexuality seem like a valid identity, I wasted a lot of time feeling anxious, confused and alone, convinced that I just had to “figure myself out” and “pick a side” to fit in — something a whole lot of bisexuals experience. It's something Miley is definitely aware of.

After all, this isn't Miley's first overtly queer song. In 2015, after coming out as pansexual (a term that falls under the bi+ umbrella, which includes everyone who identifies as neither 100 percent gay or 100 percent straight), she released Miley Cyrus & Her Dead Petz, which included ode to same-sex lovin’, “Bang Me Box,” which featured lyrics like, “Want to lick it so much/It's almost like I taste it on the tip of my tongue,” “I can feel it on my fingertips/I want yours inside of me,” and “You finger my heart.” It was your standard overtly sexual fare, but it was important coming from anyone with Miley's star power.

It still feels groundbreaking to hear a top-grossing artist sing a serious song about heartache that includes more than one gender pronoun.

Fortunately, “She’s Not Him” marks a departure from the overt sexualization of same-sex love on “Bang Me Box,” and, more significantly, from so many of the pop songs we’ve seen from other artists that garner accusations of “queer-baiting” — think Demi Lovato's "Cool For The Summer" and of course, Katy Perry's "I Kissed A Girl." And while Miley certainly isn’t the first artist on a major label to come out as bi and make music that reflects that — I see you, Halsey, Frank Ocean, and Lauren Jaguari — the phenomenon is new enough that it still feels groundbreaking to hear a top-grossing artist sing a serious song about heartache that includes more than one gender pronoun, rather than just capitalizing on a mysterious same-sex sexual encounter with a catchy hook and buzz-worthy eroticism.

There's another reason why "She's Not Him" is so important for bi visibility — it's a testament to the fickleness of the heart — which has little to no bearing on one's sexual orientation.

Someone who identifies as pansexual but “couldn’t fall in love” with a female lover because she was still hung up on a male ex is still pansexual. And being engaged to that male ex (assuming the song is, in fact, about Stella and Liam) doesn’t mean her sexual orientation is going away or changing, either. Taking that logic a step further, anyone who says that they’re pansexual or bisexual IS, regardless of the relationships they’re in or have had in the past. They shouldn’t have to prove it or earn it in order for us to believe them.

Miley doesn’t have to “look queer” to continue being queer.

While some will surely be tempted to interpret "She’s Not Him" as a sign that Miley is bidding farewell to queerness in favor of straightness, I would like to preemptively and unequivocally call BS on those interpretations. If the pronouns were reversed, the song was, "He’s Not Her," and Miley was now engaged to a woman, we’d surely be seeing headlines all over the place about how Miley is now a lesbian. It’s par for the course in our culture to label bi people based on the person they’re with at any given moment, regardless of how many times they come out as bisexual/pansexual/fluid (See: Alan Cumming, Freddie Mercury, Anna Paquin, etc.) That’s bisexual erasure in a nutshell.

Now that she has ditched the rainbow armpit hair, there’s also the usual focus on appearance when it comes to erasing Miley’s queerness — months before the album’s release, she’d already been accused of “looking straight” as part of her “creepy return to wholesomeness.” As a reminder, all kinds of people with all kinds of gender presentations identify as bisexual (and gay or lesbian, for that matter). Miley doesn’t have to “look queer” to continue being queer.

Miley’s bisexual anthem couldn’t come at a better time. A recent survey found that one third of young people ages 16 to 22 now identify as bisexual, in contrast with 88 percent of baby boomers who identify as heterosexual. That’s probably not because more and more people are queer, but because our culture is changing to become more accepting of bisexuals and queerness in general. That’s in large part because of decades of hard work by bisexual activists, but it’s also because of increased bisexual visibility, thanks in part to celebrities like Miley who are casually refusing to hide for the sake of their public image.

There’s no denying that things are especially hard for the LGBT community in the current political climate. For all the young people who identify as bi, hopefully "She’s Not Him" will go a long way not only towards affirming the validity of their identities, but also sharing the comforting knowledge that heartache — just like love — knows no boundaries.

More like this
George Ezra’s “Green Green Grass” Was Inspired By A Special Christmas Memory
By Frances Stewart
Every Single Big & Small Way You Can Fight For Abortion Rights
By Tess Garcia
For These Abortion Clinic Volunteers, Going TikTok Viral Is A Risk Worth Taking
By Audra Heinrichs
Your July 2022 Monthly Tarot Reading
By Jezmina Von Thiele
Get Even More From Bustle — Sign Up For The Newsletter