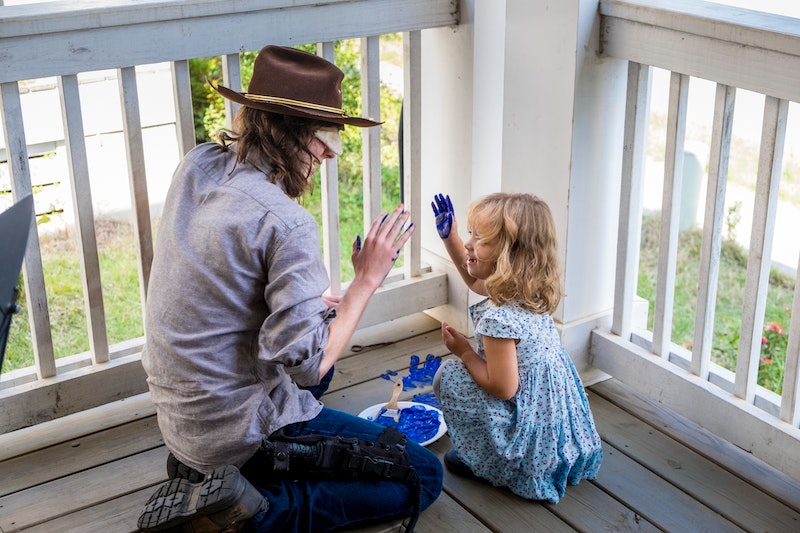 Spoilers for the midseason premiere of The Walking Dead. While fans knew that Carl's imminent death meant that Old Man Rick was not reality, but this is so much worse. It isn't a flash forward, at least not yet. Turns out, Rick is imagining Carl's vision of a brighter future — one that he promises his dying son that he will make real. Or was "Old Man Rick" actually Carl's dream all along? The details are unclear, but important for one big bat-swinging reason.

"I know you can't see it yet," Carl says to his father in the episode, "how it could be. But I have. You have a beard. It's bigger, grayer. Michonne's happy, Judith is older and she's listening to the songs that I used to before. Alexandria's bigger, there's new houses, crops, and people working. Everybody living, helping everybody else live."

Carl made Rick and Michonne promise to not become killing machines, but build a peaceful tomorrow. “If you could still be who you were, that’s how it could be,” he says. He confesses to Rick about his first kill, back at the prison, and talks about how they're all losing their humanity a little bit — but not forever.

"Carl's always been about hope," said Greg Nicotero on Talking Dead. "He's the only person that wasn't involved in the war ... so he has a completely different perspective on the world."

If those dream-like scenes are Rick's interpretation of Carl's description, the fact that his visions include a living Carl is especially depressing, but it makes sense. As Rick tells Carl in the midseason premiere, his plans for the future were always for him and the rest of their family. At the very least, this confirms that it's Carl who loves Weird Al.

On the other hand, all throughout the episode, more scenes from the Old Man Rick 'verse unfolded. This euphoric timeline gets weirder and weirder with every new detail. Judith is going by "Jude" now. Not only are people from the Hilltop and the Kingdom there, but Eugene is back and joking around with Jude like he never betrayed the entire group.

Then, in the final scene, a plaid dad Negan appears and greets Judith like an old friend. Is this part of Rick's vision, or Carl's? It's honestly a shame that Carl died before getting the chance to explain that fantasy detail. Can either of them really picture Negan trading leather for flannel and taking up gardening?

"There's a long way to go for Rick to stomach that," said actor Andrew Lincoln in an interview with The Hollywood Reporter about Negan's appearance in the premonition, "You saw in this episode that Rick is not in that place at all at the moment; he's traumatized. He's in the worst possible place and he will be there and will at least try to navigate this hell in the middle of a war, which is going to be difficult at the best of times. Rick has lost his wife and his son and so much about this back eight [episodes] is about him trying to live as well as win a battle."

That is the ultimate optimism, that a traitor like Eugene and a villain like Negan could be living in harmony with Rick, Michonne, and all the shades of moral gray in between.

Will Rick keep his promise? Will we see more of this fantasy in the future? Some of the sunny Alexandrian scenes feel so real, it's hard not to wonder whether or not they are flash-forwards and Rick did keep his word. Knowing The Walking Dead, they're going to keep us guessing for quite some time. That is, once we're done weeping over Carl and his sweet hopes for his fellow survivors.