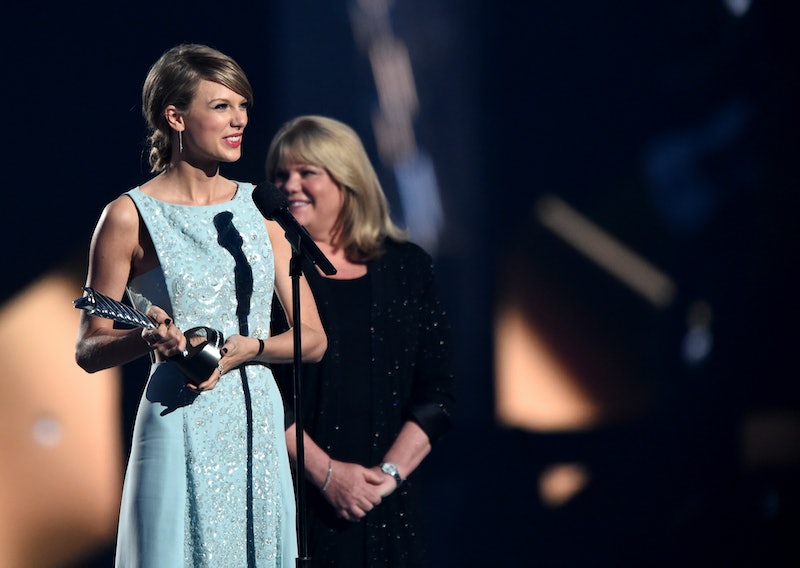 Taylor Swift doesn't take the Dixie Chicks lightly, and called them in to help the one track on Lover that's sure to make you cry. Taylor Swift's "Soon You'll Get Better" is about her mom, who is battling cancer for the second time as of this year. There are a lot of emotions bottled up in this sweet, simple tune — so get ready.

"There's a song called 'Soon You'll Get Better' on this album that was really really hard to write," Swift said in the Lover's Lounge live Q&A prior to the album's release, "and it was also a family decision to even put it on the album."

Both of Swift's parents have been fought cancer before this year, something she revealed in a piece for Elle in March 2019 titled "30 Things I Learned Before Turning 30." The new song details hospital visits, coping mechanisms, and the guilt you can feel when fear of losing a loved one seems selfish compared to what they're going through.

"I think songs like that, that are really hard for you to write emotionally, maybe they're hard to write and hard to sing because they're really true," she continued in the Lover's Lounge Q&A. "It's something I'm so proud of, but it's still really hard. I can't sing it. It's hard to emotionally deal with that song. You'll understand what I mean."

As if this song wasn't personal enough, fans will know that the Dixie Chicks hold a special place in Swift's heart. In 2011, Swift revealed at a concert that one of her earliest memories of playing guitar/the first song she learned was "Cowboy Take Me Away" by the Dixie Chicks. A few years later, just months after her mother's first cancer diagnosis, she was belting "Goodbye Earl" with Natalie Maines on stage together at the Staples Center.

Per Entertainment Weekly, the Dixie Chicks influenced more than just one aspect of Lover as an album. “The Dixie Chicks were making such interesting music and doing it in such an unapologetically feminine, imaginative way," she told the publication. "I was very inspired by the album Fly and the aesthetics, because it was very clear they had really put a lot into the artwork."

In "Soon You'll Get Better," the Dixie Chicks just join her for the chorus:

As well as the bridge:

It's not a flashy collaboration, but it's simple. It's enough.

Then, there's a sigh left in the recording that is an absolute punch in the gut. "This won't go back to normal," she sings towards the end, "if it ever was. It's been years of hoping, and I keep saying it because... 'cause I have to." By the end, Swift's talking to herself as well as her family. They'll get through whatever together, and she'll get better too. It's heartbreaking and complex, and thank goodness Swift got the added emotional support and backup she needed from her childhood faves. Those harmonies can hold up mountains.

More like this
The History Of Taylor Swift's "All Too Well" & What The Lyrics Actually Mean
By Jake Viswanath
The Ticketmaster Senate Hearing & Taylor Swift Tickets Debacle, Explained
By Jake Viswanath
Tour Rehearsals Didn’t Stop Taylor Swift From Attending The 2023 Grammys
By Jake Viswanath
Taylor Swift Visited The 'Glee' Set For This Bizarre Season 5 Episode
By Grace Wehniainen
Get Even More From Bustle — Sign Up For The Newsletter
From hair trends to relationship advice, our daily newsletter has everything you need to sound like a person who’s on TikTok, even if you aren’t.