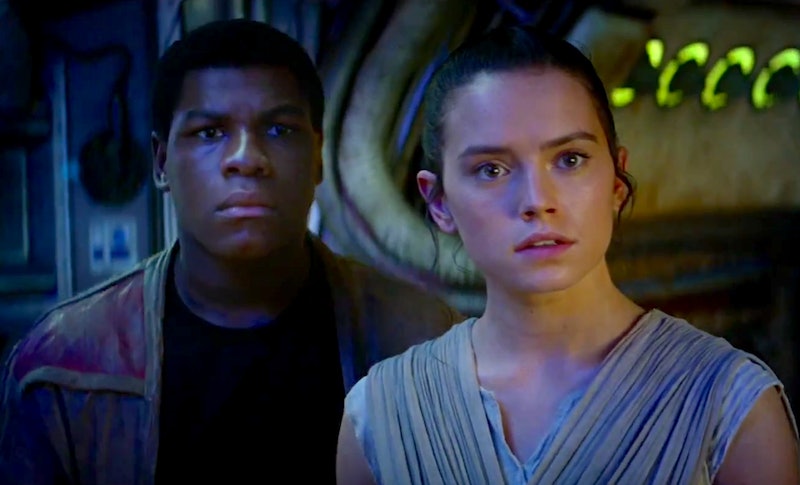 It'll be a little less than a year before we get a look at the next Star Wars film, and, though the future of the soap opera is hazy, one thing has been revealed: the name. On Monday, we found out that Episode VIII is going to be titled Star Wars: The Last Jedi. Slight spoilers ahead if, for some reason, you didn't catch the biggest blockbuster of 2015.

To backtrack on what we know from Force Awakens, Kylo Ren had slaughtered, to the best of his knowledge, all of the remaining Jedi while he was in training with his Uncle Luke. Luke, ashamed of his failure, pulled a Yoda and retreated into solitude. Rey, however, showed not only signs of possessing the force, but also being really in tune with it. By the end the film, she's discovered Luke on remote planet, brooding hardcore on a mountaintop. Roll credits.

So undoubtedly Episode VIII will show her being trained by Luke, meaning that there are/will be two Jedi co-existing in this galaxy far, far away. However, that title at first read gives a terrifying sense of finality for fans. The last Jedi... is that implying that, between Rey and Luke, only one shall come out of this film alive?

Eh, no. The one comfort we can take from this is that the plural of Jedi is... well, Jedi. That's something very important to remember before we start mentally slaying off the final member of the franchise's original trio. So, realistically, the implication here is that they'll be a big focus on the training and bond between the last two Jedi, Rey and Luke.

And who's to really say that when this is all over with, it'll only be those two? There could be a few more people out there looking to be woken up. Hell, for all we know the "last Jedi" can include a whole swarm of Jedi just hiding out in the far regions of the universe. (Although probably not. Force sensitivity seems to be a rare trait, and even more so if you're not a Skywalker).

If you look at some of the other titles — Return of the Jedi, Revenge of the Sith — you'll quickly piece together that franchise isn't necessarily mysterious, at least when it comes to the titles. With the exception of The Phantom Menace (who the hell was that supposed to be again?), they tend to be pretty straightforward. Beyond the "Last" thrown in there, I wouldn't draw too many conclusions about the last film. All will be revealed when The Last Jedi hits theaters December 15, 2017, so try not to drive yourself crazy fearing for anyone's life all year.