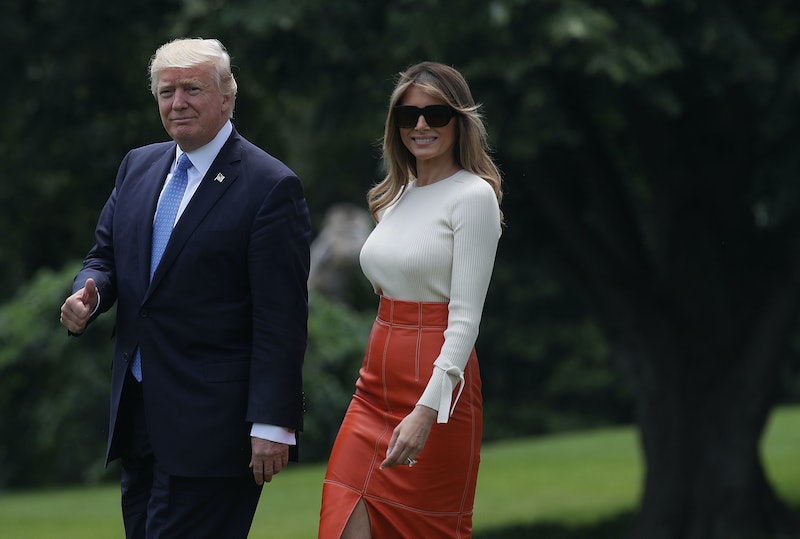 There's been a lot of discussion about Donald and Melania Trump's marriage, and Monday was no different. Upon arriving in Israel, Melania appeared to slap away Trump's outstretched hand — and sent internet onlookers into a tizzy.

It happened when their plane touched down in Israel and they were heading up a red carpet for their grand entrance. Donald reaches his hand behind him to where his wife is walking. And then Melania, with a flick of her wrist, seems to slap his hand away. As is always the case with arguments on social media, there are multiple interpretations. Was she slapping him away when he wanted to hold her hand? Was she lagging behind, and he was trying to get her to speed up? The possibilities are really endless, but one thing's clear: Melania didn't take her husband's hand when he offered it, and the internet is feeling free to take that as it will.

While it is definitely impossible to divine anything about the actual functioning of their marriage from one gesture at an Israeli airport, this might be garnering so much attention on social media because their marriage has already been the subject of much discussion.

First, there was Trump's failure to wait for Melania when meeting the Obamas at the White House, which prompted Michelle Obama to go and escort the next First Lady. Then came Melania's now-infamous smile that quickly went south at the inauguration. A continuing source of fodder was her decision to stay in New York and not to move into the White House, though now apparently she'll be moving to Washington in June. There have been body language interpretations saying that there's tension between the two of them, relationship experts analyzing their sleeping situation, and denied reports that Melania is miserable in her marriage. And now the cringe-worthy hand-slap.

Don't read too much into Melania slapping Donald's hand away, or even Donald reaching his hand out to begin with — anything could be behind it. However, the Trumps could be in the public eye for the foreseeable future, and that might mean getting used to social media firestorms at every perceived — or real — slight.

More like this
Eurovision Has Been Given A Whole New Look Ahead Of Its Liverpool Debut
By Bustle UK
This Is When Netflix Is Going To Start Charging You For Sharing Passwords
By Darshita Goyal
6 Organizations Fighting Police Brutality That You Can Support Right Now
By Syeda Khaula Saad and JR Thorpe
Indiyah's New Boots Beauty Box Is For Heartbreakers Everywhere
By El Hunt
Get Even More From Bustle — Sign Up For The Newsletter
From hair trends to relationship advice, our daily newsletter has everything you need to sound like a person who’s on TikTok, even if you aren’t.