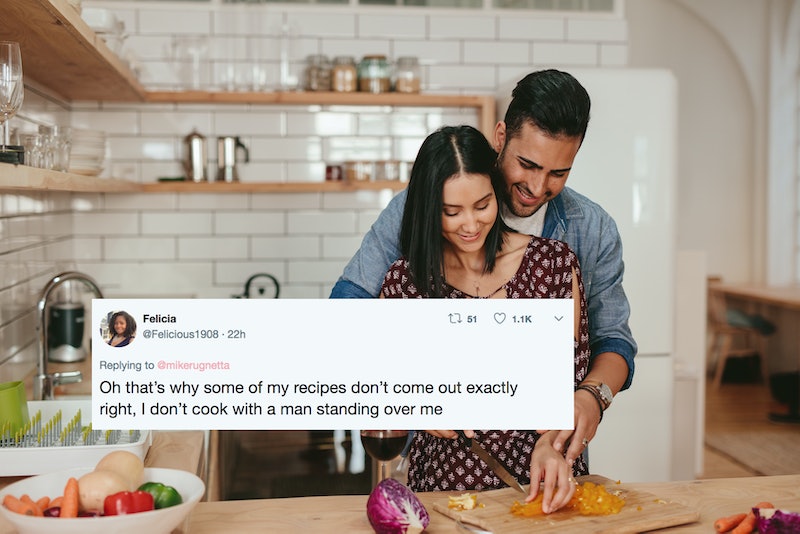 Most magazine covers follow the format of their genre. Cat magazines have pictures of fluffy felines, women's magazines feature a lady in the throes of pure ecstasy against a brightly-colored background — you get the idea. But have you ever noticed that cooking magazine covers are uniquely odd? Twitter has. On Monday, user Mike Rugnetta pointed out that when food magazines suggest "recipes for two," an absurd number choose to depict the same scenario: A smiling woman chopping vegetables while a man circles his arms around her from behind, as if that's not how date night ends in chaos and a trip to the emergency room. When other people noticed the tweet, they all asked the same question. What flesh and blood human actually cooks like that?

On Monday, Rugnetta tweeted several magazine covers featuring the scenario described above. The details vary — sometimes the woman is blonde, sometimes the man clutches her shoulders, unaware of the murderous, frozen smile she's directing at the camera — but they're all basically the same. "These poor women," Rugnetta tweeted.

It's a valid question, because it portrays a method of chopping vegetables that has never taken place in the real world. To each their own and all that jazz, but there's no way anyone has successfully made dinner with another, larger human quite literally breathing down their neck. Look at the following magazine covers and tell me this isn't a recipe for disaster.

Rugnetta and I aren't the only ones who are baffled by this template. By Tuesday afternoon, nearly 13,500 people had liked his tweet, and judging from their bemused comments, everyone was similarly confused. Later, Rugnetta followed up the initial tweet with even more examples. "WHY ARE THERE SO MANY OF THESE?" he asked. Why, indeed?

In the replies to his tweet, Twitter users put their heads together to solve this mystery. "[Did you know] that if a strong man does not stabilize a woman while she cooks, the recoil of a knife will lift her off the ground?" quipped one woman.

Another theorized that one of the magazines was actually depicting an important moment in the life of a man with a deep-seated phobia of vegetables. "His friend is trying to show him it's ok [sic], they're just food... and then a third friend took a picture and uploaded it to [T]witter for the lulz," they tweeted, adding that "walls are being broken here."

They have a point. Those are the smiles of people desperately trying to fake happiness under duress.

A different magazine cover caught another user's eye. "At what point will we be using the pot in the preparation of what looks like cucumber sandwiches?" they asked.

"I mean, I've heard those gadgets can make anything?" Rugnetta replied.

A few users pointed out the gender politics of the covers. Theoretically, they're progressive in that they show men not only in a kitchen, but helping with dinner. (You'd think that as we enter fourth wave of feminism, the idea of a man cooking at home wouldn't be so hard to find.) In reality, that man is doing absolutely nothing to help and a whole lot to hinder.

Some even compared it to mansplaining, suggesting that the unfortunate women were just trying to chop vegetables when the men barged into their kitchen to instruct them. Considering this exact situation has happened to me on multiple occasions, it's a valid interpretation.

"Mancutting. It's mansplaining but with knives and produce," tweeted one user.

Move over, Lady Laughing Alone with Salad. Sayonara, Women Splashing Her Face Ineffectually in Acne Wash Commercials. A new inexplicable cliche is in town, and it's weird enough to go viral on Twitter. I'll leave you with a warning: Unless you want to end up accidentally stabbing someone, don't try it at home.