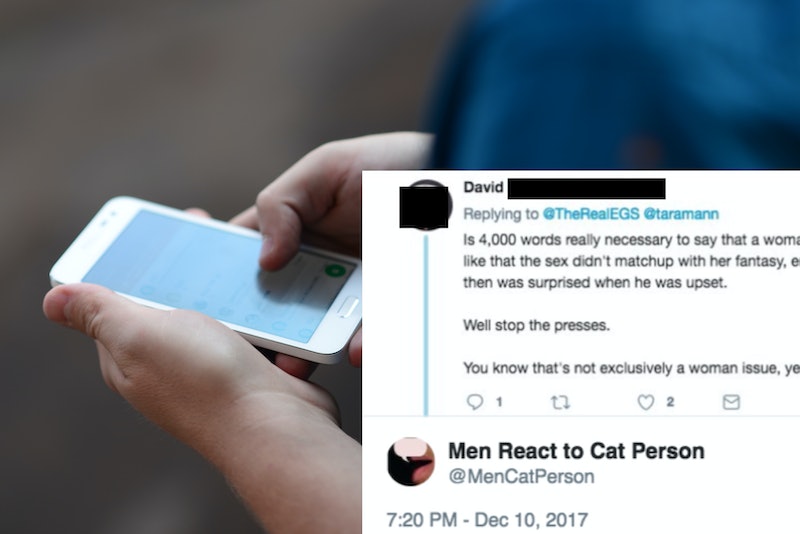 Over the weekend, the internet exploded after The New Yorker published a short story titled "Cat Person." The story, written by Kristen Roupenian and published online on Dec. 4, spun the tale of a 20-year-old college woman, Margot, who has a brief and rather unsatisfying sexual encounter with a much-older man she met at a movie theater and with whom she developed a relationship over text.

On the surface, “Cat Person” is a simple story about bad sex — but many women found it horrifically relatable, somehow managing to capture an indescribable feeling of ending up in a situation you don’t want to be in just because you don’t quite know how to get out of it without displeasing someone, or seeming unlikeable.

It’s an appropriate addition to the #MeToo era, calling attention to the ways in which young women learn to navigate sex and dating when they haven’t yet learned how to ask for what they want, and the story launched a slew of tweets and takes that spoke to women’s shared experiences. This response by Ella Dawson, on the bad sex we have but don’t want, is particularly good, as is the New Yorker’s follow-up interview with Roupenian, where she describes the “reassuring self-deceptions” we create in the early stages of dating.

But, of course, not all men can hold back their Opinions, or wield them critically. Some took issue with the story, particularly with how it handled the male antagonist, and let those Opinions be known online, as men are wont to do. Blessedly, some kind soul culled the best male responses in a “Men React to Cat Person” Twitter account, and it is ... something.

Just IMAGINE, for instance, what would happen if someone published a story by a young man that objectified women.

Indeed, does no one care about the oft-rejected men of the world?

More importantly, who among us has the time to bother trying to differentiate between a short fiction story and an “article?”

Or the time to even finish it?

Hey, women, way to make bad sex all about you.

The discussion elicited by “Cat Person” — about how we deal with sex and dating in the texting and Tinder era, about how women are taught or not taught to take agency over their own bodies and pleasure, about when and how it’s OK to say no, and about how compelled women feel to trade in their own comfort and needs to ensure they’re not upsetting anyone or making waves — is an important one, and everyone, regardless of their gender identity, is encouraged to take part in it. The more we talk about the unsaid burdens women carry, the more we can parse out why these burdens exist, and maybe spare future generations from suffering muddled, awkward sexual experiences that leave both parties burned and confused.

It’s also OK not to get or identify with “Cat Person.” It is not an article or historical document — it’s a short story, one crafted with structure and intent, and it is fiction. It feels real for some people because so many women have had an experience (or two, or eight, or fifteen) similar to Margot’s, but if it doesn’t feel real to you, that’s fine no matter what gender you identify with.

Still, when scores of women are so freaked out by a story that they have to put down their laptop, pace around their apartment, scream at a wall, and re-contemplate a good chunk of the sexual experiences they had from age 20 to 23, perhaps it’s best to ask them why, rather than dismiss them.

Or you can just go ahead and prove their point — whatever works for you!