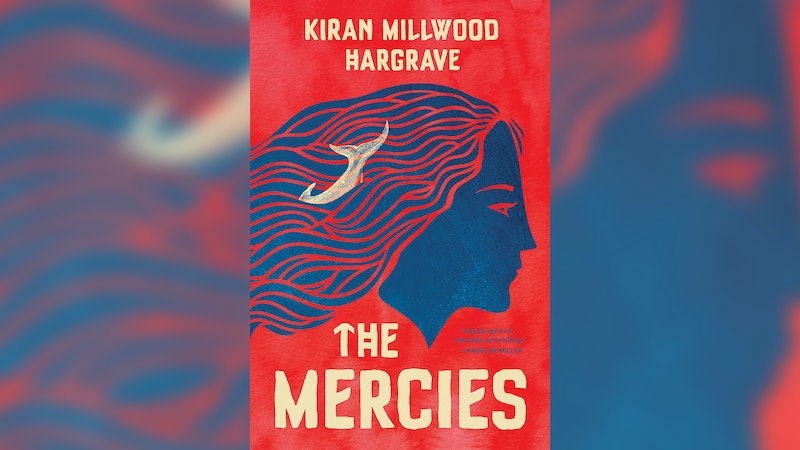 It's not surprising that the witch trials — one of the earliest, and most deadly, examples of an attempted mass subjugation of women —are still finding their way into modern literature. Kiran Millwood Hargrave's new novel, The Mercies, out on Feb. 11, 2020, draws on the real events of the 1620 witch trials and the Vardø storm for a feminist story of love, evil, obsession, and women's strength in the face of oppression. Bustle has the cover reveal and an exclusive excerpt from the book below!

The Mercies opens in 1617, in the town of Vardø, Norway. Thanks to a large storm, 40 of the town's fisherman — including 20-year-old Maren Bergensdatter's father and brother — have drowned. With the men wiped out, the women must learn to fend for themselves. Three years after the tragedy, Absalom Cornet visits Vardø from Scotland, where he burned witches in the northern isles. He brings with him his young wife, Ursa, who is both heady with her husband’s authority and terrified by it. In Vardø, and in Maren, Ursa sees something she has never seen before: independent women. But Absalom sees only a place untouched by God and flooded with a mighty evil. As Maren and Ursa are are drawn to one another, Absalom’s iron rule threatens Vardø’s very existence.

The Mercies won't be out until Feb. 2020, but you can check out the stunning cover below, and read the entire first chapter:

The storm comes in like a finger snap. That’s how they’ll speak in the months and years after, when it stops being only an ache behind their eyes and a crushing at the base of their throats. When it finally fits into stories. Even then, it doesn’t tell how it actually was. There are ways words fall down: they give shape too easily, carelessly. And there was no grace, no ease to what Maren saw.

That afternoon, the best sail is spread like a blanket across her lap, Mamma and Diinna at its other corners. Their smaller, neater fingers are working smaller, neater stitches into the wind-wear tears, while she patches cloth over holes left by the mast fastenings.

"The storm comes in like a finger snap. That’s how they’ll speak in the months and years after, when it stops being only an ache behind their eyes and a crushing at the base of their throats."

Beside the fire there’s a stack of white heather drying, cut and brought by her brother Erik from the low mountain on the mainland. Tomorrow, after, Mamma will give her three palmfuls for her pillow. She’ll wrench it apart, stuff it earth and all into the casing, the honey scent almost sickening after months of only the stale smell of sleep and unwashed hair. She’ll take it between her teeth and scream until her lungs wheeze with the sweet dirt tang of it.

Now, something makes her look up and out towards the window. A bird, dark against dark, a sound? She stands to stretch, to watch the bay, flat grey and beyond it the open sea, tips of waves like smashed glass glittering. The boats are loosely pegged out against it by their two small lights, bow and aft, barely flickering.

She imagines she can tell Pappa and Erik’s apart from the others, with its second-best sail rigged tight to the mast. The jerk and stop-start of their rowing, their backs to the horizon where the sun skulks, out of sight for a month now, and for another month to come. The men will see the steady light from Vardø’s curtainless houses, lost in their own sea of dim-lit land. They’re already out beyond the Hornøya stac, nearly at the place where the shoal was sighted earlier in the afternoon, worried into bright action by a whale.

‘It will have passed on,’ Pappa said. Mamma has a great terror of whales. ‘Well eaten its fill by the time Erik manages to haul us there with those herringbone arms.’

Erik only bowed his head to accept Mamma’s kiss, and his wife Diinna’s press of thumb to his forehead that the Sámi say will draw a thread to reel men at sea home again. He rested a hand on her belly for a moment, bringing the swell of it more obviously through her knitted tunic. She pushed his hand away, but gently.

‘You’ll call it early. Let it be.’ After, Maren will wish she rose and kissed them both on each rough cheek. She will wish she had watched them go to the water in their stitched sealskins, her father’s strung-out stride and Erik’s shambling behind. Wish that she had felt anything at all about them going, other than gratitude for the time alone with Mother and Diinna, for the easiness of other women.

"After, Maren will wish she rose and kissed them both on each rough cheek... Wish that she had felt anything at all about them going."

Because, at twenty and with her first marriage proposal come three weeks before, she at last considered herself one of them. Dag Bjørnsson was making them a home from his father’s second boathouse, and before winter was done it would be finished, and they wed.

Inside, he told her, panting hot, scratching breath beneath her ear, would be a fine hearth and separate food store so he wouldn’t need to walk through the house with his axe like Pappa did. The wicked glint, even in Pappa’s careful hands, brought bile to her tongue. Dag knew this, and cared to know. He was blond as his mother, delicately featured in a way that Maren knew other men took to mean weakness, but she didn’t mind. She didn’t mind that he brushed his wide mouth against her throat, as he told her of the sheet she should weave for the bed he would build for them. And though she didn’t feel anything at his hesitant caress at her back, too gentle and high to mean much at all through her navy winter dress, this house that would be hers — this hearth and bed — sent a pulse low in her belly. At night she’d press her hands to the places she’d felt the warmth, fingers cold bars across her hips and numb enough not to be hers.

Not even Erik and Diinna have their own house: they live in the narrow room Maren’s father and brother tacked along the back edge of their outer wall. Their bed fills the width of it, is pressed flush against Maren’s own through the divide. She put her arms over her head on their first nights together, breathing in the musty straw of her mattress, but never heard so much as a breath. It was a wonder when Diinna’s belly started to show. The baby would be here just after winter left, and then there would be three in that slender bed.

After, she will think: perhaps she should have watched for Dag too.

But instead she fetched the damaged sailcloth and spread it over all their knees, and did not look up until the bird or the sound or the change in the air called her to the window to watch the lights shifting across the dark sea.

"Mamma is fetched to the window by the light and the noise, the sea and sky clashing like a mountain splitting so they feel it through their soles and spines."

Her arms crackle: she brings one needle-coarsened finger to the other and pushes it under her woollen cuff, feels the hair stiff and the skin beneath it tightening. The boats are still rowing, still steady in the uncertain light, lamps glimmering. And then the sea rises up and the sky swings down and greenish lightning slings itself across everything, flashing the black into an instantaneous, terrible brightness. Mamma is fetched to the window by the light and the noise, the sea and sky clashing like a mountain splitting so they feel it through their soles and spines, sending Maren’s teeth into her tongue and hot salt down her gullet.

And then maybe both of them are screaming but there is no sound save the sea and the sky and all the boat lights swallowed and the boats flashing and the boats spinning, the boats flying, turning, gone. Maren goes spilling out into the wind, creased double by her suddenly sodden skirts, Diinna calling her in, wrenching the door behind to keep the fire from going out. The rain is a weight on her shoulders, the wind slamming her back, hands tight in on themselves, grasping nothing. She is screaming so loud her throat will be bruised for days. All about her, other mothers, sisters, daughters are throwing them- selves at the weather: dark, rain- slick shapes, clumsy as seals. The storm drops before she reaches the harbour, two hundred paces from home, its empty mouth gaping at the sea. The clouds roll themselves up and the waves fall, resting at each other’s horizons, gentle as a flock settling.

"And then maybe both of them are screaming but there is no sound save the sea and the sky and all the boat lights swallowed and the boats flashing and the boats spinning, the boats flying, turning, gone."

The women of Vardø gather at the scooped-out edge of their island, and though some are still shouting, Maren’s ears ring with silence. Before her, the harbour is wiped smooth as a mirror. Her jaw is caught on the hinges of itself, her tongue dripping blood warm down her chin. Her needle is threaded in the web between her thumb and forefinger, the wound a neat circle of pink.

As she watches, a final flash of lightning illuminates the hatefully still sea, and from its blackness rise oars and rudders and a full mast with gently stowed sails, like underwater forests uprooted. Of their men, there is no sign.

It is Christmas Eve.

More like this
Romance Authors Are Mobilizing For Reproductive Rights
By Natalia Perez-Gonzalez
Aemond Targaryen's Fate On 'House Of The Dragon' Is Full Of Revenge In The Book
By Grace Wehniainen
This Episode 6 Moment Foreshadows Viserys' Fate On 'House Of The Dragon'
By Grace Wehniainen
Ling Ma Is Back — This Time, With Yetis
By Kate Dwyer
Get Even More From Bustle — Sign Up For The Newsletter