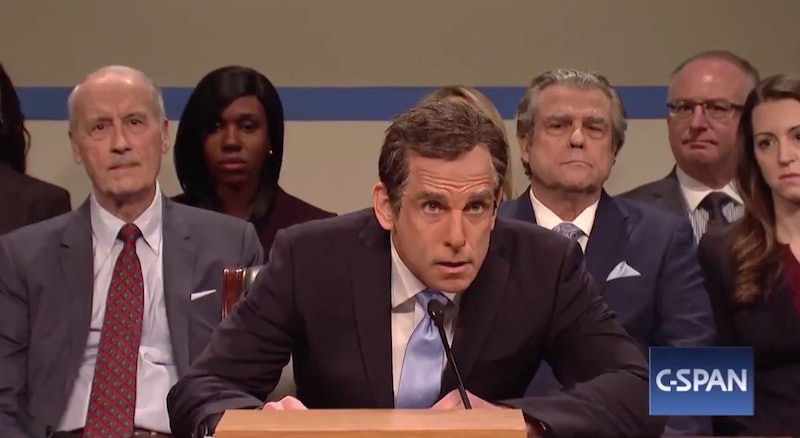 Michael Cohen's 2019's questioning in front of the House Intelligence Committee felt like one of the first truly momentous political moments of the year. However, for a certain portion of the population the burning question the sprang up from the hearing wasn't "Will any action be taken to further investigate claims made in Cohen's testimony?" but was, instead, "What will Saturday Night Live have to say about the Cohen hearing?" SNL's Cohen hearing cold open mostly served as a recap for some of the most absurd moments and most memorable personalities of the hearing, but the sketch also made an effort to point out one crucial detail from Cohen's background that it seemed wasn't discussed much during the actual hearing.

There's no secret that the strategy of many Republicans serving on the committee was to discredit Cohen's testimony by pointing out that he was a known liar, having previously lied to Congress while under oath. Representative Jim Jordan, played on SNL by former cast member Bill Hader, stated that Cohen was not to be trusted by the Republicans, Democrats, or anyone else.

In the sketch, however, Cohen (played once again by Ben Stiller) pointed out that one group that had trusted him in the past was the Republican National Committee, for whom he served as the deputy finance chair. While this didn't come out explicitly at the hearing, the SNL cold open didn't hold back on their belief that the Republicans dug themselves into a hole by attacking their former deputy finance chair.

Elsewhere in the sketch, SNL poked fun at Representative Paul Gosar, played by Kyle Mooney, and his visual aide displaying a picture of Michael Cohen with the words "Liar Liar Pants On Fire!". Later, Alex Moffat portrayed Rep. Mark Meadows, parodying the moment where he presented a black employee of Donald Trump's as proof that the President is not racist.

While the sketch had a strong focus on the Republican effort to discredit Cohen, the sketch also found an opportunity to crack a few jokes at the expense of Representative Debbie Wasserman Schultz and their shared New York accents.

While they had plenty of jokes to make about the other Representatives on the committee that asked questions of Cohen, the only person that SNL didn't seem to have a joke to make about was Alexandria Ocasio-Cortez, who was played once again by Melissa Villaseñor. The sketch had a joke towards the beginning when Elijah Cummings, played by Kenan Thompson, teased a "performance by Alexandria Ocasio-Cortez," acknowledging that viewers were likely excited for her incisive questioning. Thompson's Cummings took a moment before the end of the sketch to point out that, judging from some of the comments made earlier in the hearing, the hearing didn't seem like it was intended for the well-researched line of questioning that had been prepared by AOC.

While Cohen's testimony was only one small chapter in a much larger story, SNL's cold open served as a reminder that it's up to everyday Americans to research the public figures involved in government, because otherwise some of the hearing's viewers may have never known that Cohen used to be employed by the RNC that supports some of the same people that grilled him.

More like this
We Still Have A Few Unanswered Questions At The End Of 'The Suspect'
By Sophie McEvoy
Two UK Cities Are Now In The Running To Host Eurovision 2023
By Sam Ramsden and Rachel Mantock
Here's What Jeffrey Dahmer's Dad Has Said About His Other Son, David
By Grace Wehniainen
Where Is Lionel Dahmer Today? Jeffrey Dahmer’s Father Reflected On The Serial Killer’s Death In 2020
By Brad Witter
Get Even More From Bustle — Sign Up For The Newsletter