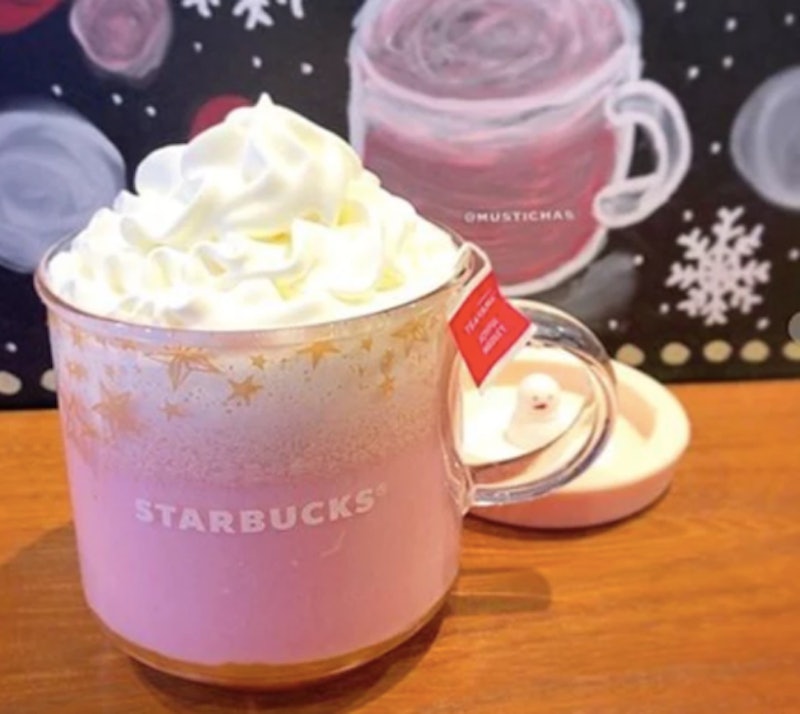 The countdown to Valentine's Day has begun, and with it comes the pink-ifying of anything and everything retail. In Japan, that includes the lattes. In honor of the most romantic holiday of the year, Starbucks has introduced the Pink Medley Tea Latte for a limited time, and unlike other drinks of a similar hue, it's a hot drink rather than a Frappuccino. Millennial Pink strikes again — not that anyone with an Instagram account is complaining.

So what goes into the frothy, pastel concoction? According to Pop Sugar, it's a mixture of steamed milk, foam, and a new type of Teavana tea known as Joyful Medley. The latter is what gives the drink its unique pastel shade, and the tea lives up to its name: It's a medley of black, oolong, and jasmine teas infused with flavors of orange, peach, apple, and strawberry. Apparently, the drink is already sweet, but anyone with a hankering for sugar can add white chocolate syrup to the bottom for added sweetness. According to Hype Bae, the overall flavor is "smooth and sweet."

If you're not already itching for a taste, you will be after you see the photos. The drink is, naturally, perfect for a midmorning 'gram.

Frankly, the drink is a childhood dream come true for anyone who played with Barbie as a kid. I'm not saying you have to coordinate your entire outfit to match your Starbucks drink, but you and I both know it would be adorable.

Tragically, there's a catch. According to Food & Wine, the Valentine's Day-themed latte is only available through Feb. 14. After that, you'll have to go back to your regularly scheduled, cream-colored lattes. (Yawn.) Oh... and they only make it in Japan. I probably should have led with that information.

The good news is that diehard pink lovers still have options stateside. The aptly-named Pink Drink, which combines Strawberry Acai Refreshers with coconut milk for a pastel pink shade, officially joined the American menu last April. Unfortunately, it only comes as an iced drink, so it's not exactly the kind of beverage you want to be sipping while the snow piles up against your windowpane. (Or maybe that's exactly what you want to do. To each their own.) On the other hand, plenty of cafes other than Starbucks offer pink lattes. Usually, they're colored with beet, which some baristas claim gives the drinks anti-inflammatory qualities. Regardless of their health benefits, they're a must-try for any Instagrammer simply for their aesthetic value.

In a social media landscape dominated by photo-heavy apps like Instagram and Snapchat, there's tons of pressure for cafes to make their drinks as pretty as possible. When you're looking for new followers, a simple photo of a latte with your name spelled wrong doesn't cut it anymore. For their part, cafes have stepped up to the plate, introducing more and more brightly-hued drinks every day. Last fall, the matte black latte available at Round K cafe in New York City was all the rage; before that, it was the rainbow foam latte created by a barista in Las Vegas.

Then there's the beloved, brightly-colored Unicorn Frappuccino, which will always reign supreme (even if it doesn't necessarily taste great).

Who knows when the madness will end, or to what heights of neon it will take us? Hopefully, the colorful food trend won't draw to a close before the Pink Medley Tea Latte hits U.S. shores. Starbucks, are you listening? There's a market ready and waiting over here. Until then, I guess millennial pink lovers will have to keep a vial of food coloring on their person until it's warm enough for the Pink Drink again.