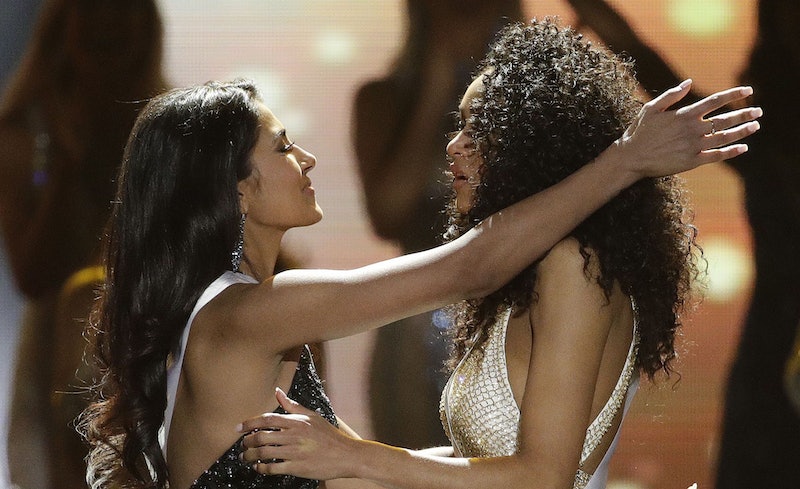 Watching pageants like Miss USA 2017 is a bit of a guilty pleasure for me. The women are impossibly stunning, the dresses are glamorous, and the commentary is delightfully cheesy. I usually spend most of the time reading snarky tweets and half-heartedly glancing at the screen.

That said, I almost jumped off my couch when I saw the top 10 finalists announced on May 14 during the 2017 Miss USA pageant. The judges chose five black women, one Indian woman, and a woman of indigenous heritage — in other words, 70 percent of the finalists were women of color.

When Miss District of Columbia Kára McCullough was crowned Miss USA a bit later, I couldn't handle it. Seeing a woman of color with a natural hairstyle being crowned by last year's winner — a woman of color who wore her hair in a natural style for the pageant in honor of her mother — felt incredibly symbolic. It's hard to describe the emotions involved.

Despite the fact that a black woman won the title last year, diversity isn't the first thing that comes to mind when someone mentions a beauty pageant. In fact, the organization crowned its first African American winner in 1990, nearly 40 years after the pageant's inception.

Seeing the 2017 stage filled with women of color almost brought me to tears. My husband was confused, since I'm not usually that emotionally invested in reality TV or televised competitions. To be honest, I was surprised at my own elation. Perhaps it was because for women of color, seeing non-white beauty acknowledged or celebrated is a victory. Seeing women of color celebrated in a traditionally white space felt revolutionary, like an act of resistance in a country that still elevates whiteness.

Black Twitter was freaking out just like I was about the number of minority finalists. I saw the #BlackGirlMagic hashtag more times than I can count. Simultaneously, however, I also saw many people (almost all white) calling the top 10 a poor choice.

Of course, I'm no pageant judge, so there's a chance that some of these complaints were legitimate in terms of traditional scoring. But these viewers missed the mark when it comes to the importance of representation.

Imagine turning on your television and half of the women onstage looking like you. For white women, this is the norm. For black women, it's a dream come true. I called my 19-year-old sister because I knew she wasn't watching, and she shared my excitement.

"You don't see black women recognized, especially in the beauty industry," she said. She's right. Black women deal with unconscious biases every day and are still thought of as unattractive and undesirable.

I can understand how attributing so much to a beauty competition seems silly, especially to those who think beauty pageants are outdated or sexist Problematic or not, Miss USA challenged white supremacy on a national level, and that's something that we should celebrate.

Of course, the industry still has a long way to go. Even with racial diversity, the pageant was still dominated by cis, able-bodied and thin women. Even though I could see myself among the women in the top 10, there were still plenty of bodies not represented.

If we really want pageants to be representative, a lot of things will have to change. Miss USA will need more than minorities in the top 10 — the pageant needs to make room for women who don't fit conventional standards of attractiveness.

I only turned on the pageant because of a mixture of boredom and fascination, but it ended up making my week. Who knows? Maybe we'll see an all-black top 10 one day. There's still a long way to go in terms of inclusion, but after Sunday, I'm filled with hope. A traditionally white stage was dominated by women of color, and people all over the country were reminded of an important truth: Non-white women are beautiful, and we're not going anywhere.